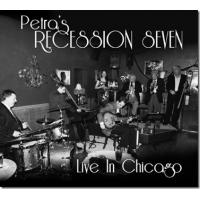 Petra van Nuis' voice is at once alluring and robust. Her tone alternates between delicate playfulness and declarative strength, perfectly suiting the combination of hot jazz and standards on Live In Chicago, an enchanting portrait of her band, Petra's Recession Seven. And oh, what a band it is—capable of captivating backing as well as exciting soloing.

Gershwin's "Somebody Loves Me" highlights the septet's upbeat mastery. Kicking off with guitarist Sandy Brown's graceful introduction, trumpeter Art Davis surges in on a wave of melodic liveliness before van Nuis seductively corrals the melody for herself. Anchored by Bob Rummage's crisp drums and Brown's master class in comping, the band settles into a pulsing, supportive backing before trading off a storm of inventive solos that feature not only Brown and Davis but clarinetist Kim Cusack, trombonist Russ Phillips and double bassist Joe Policastro, all incorporating the flavor of hot jazz with a modern harmonic understanding.

On the beautifully executed duet "I'll Never Be The Same," van Nuis and Brown create a warm landscape through an unrushed vocal treatment and an open, arpeggio-rich guitar showcase. Alone together, Brown and van Nuis easily inhabit a world of their own musical making. "You're A Lucky Guy" displays the medium-paced trot that the full band excels at swinging through. It is a stand out track, highlighting the musicality of the band members' solo abilities, not to mention their cohesive rhythms.

In a nod to the recent recession, the liner notes states that Petra's Recession Seven: Live In Chicago draws its inspiration from the music of America's Great Depression and, although the economy suffered setbacks in both, this album shows there's never been a lack of beautifully wrought music in either era —especially for those lucky enough to being sitting in the audience on the nights Petra's Recession Seven recorded.

Runnin' Wild; Sugar; Somebody Loves Me; Manhattan; Someday Sweetheart; I'll Never Be The Same; Struttin' With Some Barbecue; Havin' Myself A Time; You're A Lucky Guy; I Don't Want To Set The World On Fire; There'll Be Some Changes Made; Baby Won't You Please Come Home.