By NORMAN WEINSTEIN
August 1, 2005
Sign in to view read count 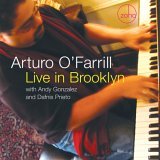 This recording may come as a surprise for those who identify pianist Arturo O'Farrill primarily as the heir to the throne of his father Chico O'Farrill, the esteemed Latin jazz big band leader and composer. While he has honored his father's legacy with his leadership of the Lincoln Center Afro-Latin Orchestra, the Arturo O'Farrill this remarkable CD celebrates is a stellar pianist comfortable withinin a wide spectrum of jazz.

Recorded live at a Brooklyn club, this recording finds O'Farrill in the intimate context of a piano trio, accompanied by veteran bassist Andy Gonzalez and the up-and-coming young Cuban drummer Dafnis Prieto. So integral is each musician's contribution that one could quibble that the recording should have been released with a credit to the Arturo O'Farrill Trio. The constantly imaginative contribution of all parties sounds seamless.

The program consists of seven covers, six coming from composers as diverse as Carla Bley, Ellington, Monk, and Horace Silver. The one original tune, "Vieques," comes from the pen of bassist Andy Gonzalez. The highpoint is perhaps an eleven-minute version of Wayne Shorter's greatest "hit," "Footprints," which here receives a blisteringly boisterious reformulation, O'Farrill moving in and out of Latin figures with dazzling speed, but with an ever tasteful reinterpretation of Shorter's questing spirit.

Andy Gonzalez maintains a striking singing tone on bass that conjures up the ghost overtones of a low woodwind. And Prieto lays claim to carrying on the drumming tradition of Tony Williams, with a wildly flamboyant solo of careening polyrhythms at home in the context of both Latin jazz and free jazz. The bubbling youthfulness of Prieto's drumming, working in counterpoint to the stately majesty of the bassist twenty years his senior, is attractive. The generational interplay here, seconded by O'Farrill being part of Pietro's generation, makes this the most dramatically satisfying recording of "Footprints," besting Shorter's own. Think of Gonzalez playing Apollo to the Dionysus of O'Farrill and Prieto.

The sequencing is quite effective, placing the Shorter tune in the middle of this hour-long recording. It segues from that example of thoughtful sound and fury to Bley's touchingly lyrical and pensive "Utviklinsang," a spotlight for O'Farrill alone, which then travels through the past to a thoughtfully unsentimental version of Duke's "In a Sentimental Mood." The disc closes with a rousing interpretation of Monk's "Well You Needn't" that makes me wish the young Prieto had been around to perform with Monk, given how noisy and quirky his drum solo is. This is one of the most engaging piano trio recordings I've heard in years, and it suggests the new turf the son of the famous Latin jazz father has already successfully claimed as his own.