By MARK CORROTO
February 3, 2012
Sign in to view read count 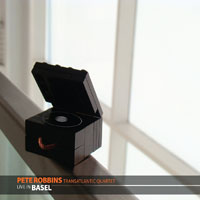 Like most modern jazz players, alto saxophonist Pete Robbins works in multiple bands, playing varying styles and disciplines of this thing called jazz. Sounds reasonable, yes? But, thirty years ago this wasn't possible. Musicians, listeners, and jazz critics (let's not leave them out) had to take sides, choose categories and labels to classify and compartmentalize their music. You were either a traditionalist, a fusion advocate, or an avant-garde specialist. Neither the twain shall meet. Sound like politics in America today?

Thankfully, we have shed those differentiations, and Robbins can dabble successfully in multiple jazz genres. His Transatlantic Quartet is a harmonic and rhythms-centric crowd- pleasing performance band. After his first three studio recordings, he released the totally free-improvised Live In Brooklyn (Not Two, 2011) with his Unnamed Quartet, and the rocking and raucous siLENT Z Live (Hate Laugh Music, 2010).

Continuing with the live (read: "alive") nature of his music, Live In Basel invokes the new Brooklyn sound but with an international cast including Irish bassist Simon Jermyn, Canadian drummer Kevin Brow (who lives in Copenhagen), and Danish guitarist Mikkel Ploug.

This band revives the idea that jazz is folk music, just as hip-hop and rock are now part of popular folklore. Without dipping their toes into jazz/rock fusion, the quartet fires an electric vibe, Jermyn employing a six-string electric bass (and some deft effects) and Brow fusing his jazz drumming with hints of hip-hop and club beats. Robbins is satisfied to deal with concise melodies and harmonies here. "Eliotsong" is a slick break-beat shimmy of groove acceleration, "Inkhead" meshes disparate parts into another satisfying groove, and "Hoi Polloi" rewinds the Brooklyn sound back to early Steve Coleman days. Robbins and Ploug skate the urban lines between jazz and funk, without giving into either. They also navigate a simple, yet beautiful ballad, "The Quiet Space Left Behind" and the psalm-like "Hope Tober" with its bold melody, played without comprise .