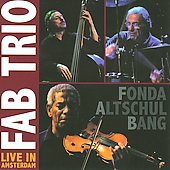 If three previous live albums weren't proof enough, Live in Amsterdam underscores how the FAB Trio thrives on the high-wire act of playing in front of an audience. Bassist Joe Fonda, drummer Barry Altschul and violinist Billy Bang treat the crowd at the Bimhuis Jazz Club to some excellent avant-garde virtuosity that, although lengthy and involved, is neither overlong nor self-indulgent.

The trio, in various permutations, artfully blends free and straight-ahead elements to create ambitious, complex tunes. "Fabmusic Opening," for example, begins as an extended, high energy duet between Altschul and Fonda; after Bang's cyclonic solo, the band builds off his energy beautifully and ends with a playful stop-time coda centered on Altschul's nimble percussion. On the epic "Go East/Da Bang" Fonda's bass alternates between a robust pizzicato and an empathetic arco, the sophistication and power of Altschul's drumming here recalling the genius of Elvin Jones. Bang, however, is dominant, his violin invoking the sound of mischievous laughter or the growl of a buzz saw or hitting high notes at canine frequencies, walking the fine line between musicianship and wizardry. The trio shows an even greater range on "Fabmusic Continuation/Spirits Entering." Initially Bang plays a quaint pizzicato to complement Fonda's mournful bowing, then the song explodes into bop territory. Fonda puts down the bow and plucks demonically, Bang squeals and screeches like a madman and Altschul adds startling accents and polyrhythms to his already stellar timekeeping.

The interplay throughout Live in Amsterdam is peerless. Even if Fonda, Altschul and Bang seem to play independently at times, they've worked together so much that they're always in sync and act on each other's thoughts immediately. This simpatico gives their sound an enviable seamlessness that's a pleasure to hear. The music is excellent and the three veterans' exhilarating adventurism and disregard for conventional musical boundaries results in an enthralling document.