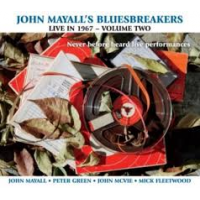 The release of Live in 1967 Volume Two does more than complement its companion piece released last year. With such archiving taking place coincidental with John Mayall's continuing activities in the studio and on the road, "The Godfather of British Blues" reaffirms his legacy as much as his commitment to this music.

As with its predecessor, this collection of performances has been taken from audience recordings by Tom Huissen at various clubs including the Marquee and Klook's Kleek during the spring of this epochal year. While Mayall's co-producer/engineer Eric Corne admits in the abbreviated liner notes "the final result is certainly not hi-fidelity," the rough-hewn sonics suit this vintage music, much of it in raw form due to the mere three months of the group's tenure together. Right from the beginning, on "Tears in My Eyes," however, it is Peter Green's guitar solos that cut through most clearly; whether that's the result of Corne's technical expertise or simply the maintenance of the band's mix via his mastering, it exemplifies the man's stature within, no doubt, the scene of the time, Mayall's Bluesbreakers and indeed in truth, the history of British blues.

The successor to guitarist Eric Clapton, who left Mayall's employ after his second stint to form Cream, Green brought a distinctive style that informed not just his own playing, but the fast-evolving sound of the Bluesbreakers. As such, while the album of that name—nicknamed 'Beano' for the comic 'Slowhand' was reading in the cover shot—is largely regarded as definitive, the first and only studio album with Green, A Hard Road (London, 1967), not only redeemed Mayall's choice to enlist him, it validated Green's position in the hierarchy of guitar heroes of the time, including EC, Jimmy Page and Jeff Beck. Even more importantly, the album, as well as continuous live gigging, furthered the evolution of Mayall's vision.

As an indication of that prestige, the guitarist's original instrumental "Greeny" appears here along with a select few of Mayall originals, including "Please Don't Tell" and "Chicago Line" otherwise, classic blues such as "Stormy Monday" and "Double Trouble" as well as a tune from Mayall's idol J.B Lenoir, "Talk to Your Daughter" comprise the baker's dozen cuts here. The overly-trebly presence of the mix doesn't allow much more than shadows to emanate from the bass of John McVie and drummer Mick Fleetwood (the eventual founders of Fleetwood Mac with Green) and that may, in fact, be the greatest shortfall of the sound quality; nevertheless, the unity of the quartet permeates the musicianship, making Live in 1967 Volume Two much more than a mere curio or simply the sum of its parts: hearing it carries an impact in direct proportion to its historical significance.

Although there is no doubt to the legitimacy of his designation as "The Godfather of British Blues," John Mayall would do well to oversee more archive release like Live in 1967 Volume Two (in addition to other similar titles available through his website). Given his personal involvement in such details as sonic restoration (with Corne) and packaging, whether he enlists assistance to initiate such a long-term campaign, Mayall reaffirms his legacy and cements his reputation for successive generations.