By GLENN ASTARITA
February 9, 2006
Sign in to view read count 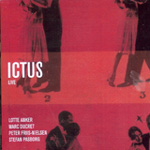 The members of the jazz contingent presented here are well-known entities in Scandinavia, often performing in various collectives, established bands and pick-up groups. But French native guitarist Marc Ducret has performed with a who's who of modern jazz, including American saxophonist Tim Berne and others. The same could be said of Danish saxophonist Lotte Anker, for example, but at the end of the day, jazz/improvisation is not constricted to borders or predetermined vernaculars. In essence, these sentiments are diffused throughout this live release.

The group chemistry evolves via elements of minimalism and four-way dialogues akin to the fluctuating pulse readings of an oscilloscope. The quartet mixes it up all up with subtle resonance, circular patterns and intuitively defined variables. Electric bassist Peter Friis Nielsen is the anchor, while Ducret's amplified electric guitar work fills in the blanks, largely due to his angular lines and spacey chord progressions. At times the quartet creates climactic environs. Ducret turns up the heat in spots atop Nielsen's pumping lines, while Anker weaves and intersects through numerous mini-themes. On "The Sky Below/Restoration, Nielsen renders an ostinato groove in support of Ducret's heated soloing, which is dashed with ominous intentions. They use time, space and depth to their advantage within the multifaceted fabrics of improvisation.