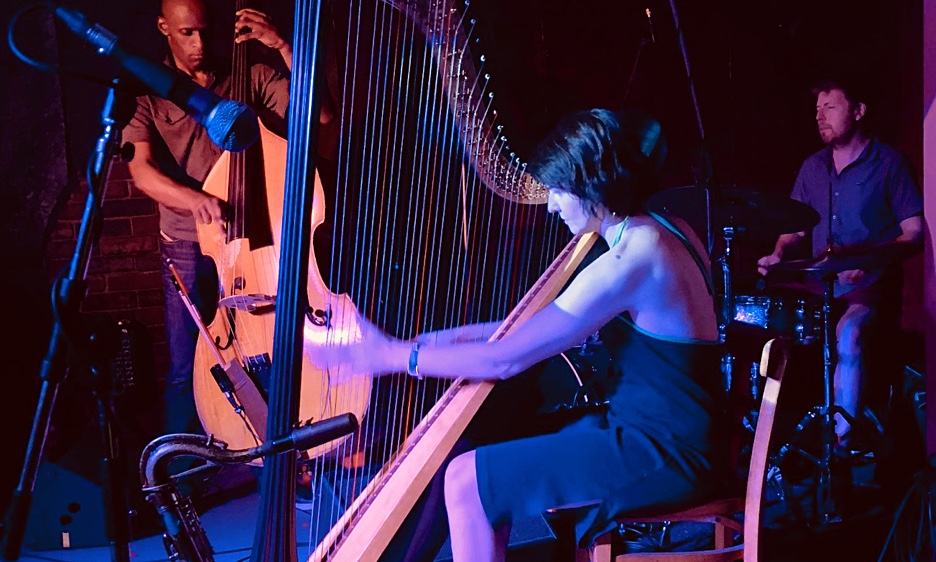 In an uncanny bending of happenstance tendencies, we found ourselves with three harp gigs in less than one week, even though manifested as moderne classical, folk troubadour and spiritual jazz styles.

Harpist Ruth Wall and keyboardist Graham Fitkin regularly work together as the composite unit FitkinWall, and here they were presenting a day of activities at the still-smelling-new Royal Birmingham Conservatoire. Fitkin is well established on the new music scene, especially as a composer, whilst Wall has strong connections with artists such as Kathryn Tickell, Goldfrapp, and Will Gregory's Moog Ensemble.

There were three performances, and your scribe attended this 6pm middle concert, in the medium-sized Recital Hall. The set was around an hour long, and divided between Fitkin's "Lost" (extracts) and Steve Reich's "Harp Phase," one of the New Yorker's lesser performed works. Fitkin's tables were littered with electronic modules, surrounding a Moog, whilst Wall's harp (she used different sized instruments for each section) was standing alone. The "Lost" pieces were quite accessible, even poppy, in nature, whilst the Reich patterns possessed a typical vibrating accumulation of sonic veiling. The gig had just the right duration of almost exactly an hour, pointedly presenting these compatible halves, with some pleasing explanatory chat in-between.

A now-beardless Robin Williamson appeared at this intimate gig with his wife, Bina, in laid-back, conversational mood, and favouring an almost constant shuffling between different instruments. This 74-year-old's main axe has always been the harp, though, right from his early Edinburgh days with The Incredible String Band. Robin and Bina are currently living in Cardiff, and their first set opened with a pair of Welsh tunes, on Celtic harp and bowed psaltery (a small zither). Williamson switched to mandolin for a Scottish number, with Bina singing. The next tune found him on fiddle. "Frosty Mornings" and "Lord McDonald's Reel" continued the sensitive, fragile exposure, combining quaint oration with musical items. The presentation might have been gentle and informal, but the sequence of short pieces were continually regenerating the audience's attention to fragile detail. Williamson then delivered "John Barleycorn" on guitar, maintaining a completely acoustic nature throughout the two short sets.

Okay, so this last of these three harp gigs was actually in Coventry, but that's only a short train ride from Birmingham. It was also easily the most profound of the three shows, as harpist Alina Bzhezhinska revealed her complete inhabitation of the jazz form, despite being a relative newcomer to the scene. The evening's music sprang from the repertoire of fellow harpist Alice Coltrane, the wife of saxophonist John, and a significant composer and performer in her own right.

The Polish/Ukrainian Londoner Bzhezhinska was joined in this regular quartet by saxophonist Tony Kofi, bassman Larry Bartley and drummer Joel Prime. A soft entrance spread glistening threads of sound, but once joined by the rest of the band, Bzhezhinska started to strike her strings, palms flat across several, Kofi spiraling soprano horn above her vast repertoire of plucks, rivuleting and billowing phrases. Bzhezhinska's extreme gusto was heightened by bold amplification during the opening run of "Wisdom Eye" and "Blue Nile." A rolling pulse developed for "Los Caballos," Kofi deepening down on tenor, Bzhezhinska sounding more like a pianist at times, making curt blows, which were sharply curtailed. The solos didn't seem so much like solos, as they were mostly integrated seamlessly into the compositions. Bartley's throbbing lines doubled the emphasis on thrusting power, and when he was left completely alone, the tensile thrum of his strings was revealed, sounding like they were deliberately kept looser than most, to assist these heady vibrations.

Bzhezhinska offered a couple of her own tunes, and these had a more self-consciously classical lyricism, although anointed with Eastern European droplets. A samba beat grew during "Annoying Semitones," as she bent notes on her high-end strings. Bzhezhinska played a number from Alice Coltrane's recent anthology of meditational ashram music recorded during late-1980s and early '90s, as a duo with Kofi on soprano. Joe Henderson's "Fire" (Alice played on its original) opened with an extended bass solo, joined by harp swipes, cymbals, then drums, and lastly Kofi, heralding an acceleration of pace. Prime paid attention to detail, with his precise constructions scattered with tingling bells. Although many in the audience supplied jazz-style clapping, this didn't always seem appropriate, given the pliable merging from one to the next spotlit episode. John Coltrane's "After The Rain" was pondered with authority and conviction, and then, just as time was disappearing, a curfew looming, the most significant tune of the night arrived, as Bzhezhinska began "Journey In Satchidananda," Alice's best-known composition, and quite possibly her greatest work. This quartet's reading was suitably majestic.