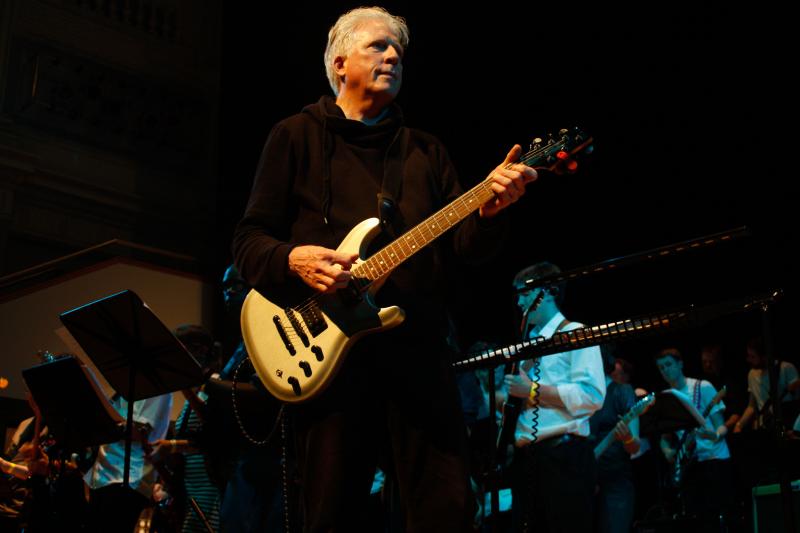 When the guitarist/composer Rhys Chatham performs with his small combo, he's usually clad casually, but in his role as conductor for this large-scale performance, he was suitably be-suited. There's an immediate dichotomy here, when this New Yorker's epic 2006 piece, "A Secret Rose," was presented with the trappings of a classical work, but actually involved around 100 liberally-amplified electric guitars. This was the UK premiere of the 75 minute, five-movement piece. Is this still rock'n'roll, harnessed by a score, yet still sounding somewhat unhinged? The closest musical comparison can be made with the work of Glenn Branca, with whom Chatham worked in 1978, although it's not quite clear who influenced who, in the direction of guitar-stacked compositions. Chatham's roots writhe right back to the beginnings of minimalist music, having studied under La Monte Young and Morton Subotnick in the late 1960s and early '70s. He was the first music director of The Kitchen, that famed NYC art-space.

If you consider 100 electric guitars to be quite excessive, this is very restrained when set beside Chatham's work for 400 axes. Not that your reviewer got into pedantic counting distraction, but an approximate scan suggested that the number of guitarists might have been more around the 75 mark. Either way, the massed riffage was certainly sufficient in its propulsive weight. There looked to be around 50 amplifiers onstage, so there was a certain amount of sharing involved. The guitars were divided into three sub-sections, each directed by Chatham's immediate sub-conductors, who appeared to be, in turn, responding to the composer's ultimate pulse. The drummer and bassist looked like they were directly in thrall to Chatham, loaded with the responsibility of driving this ungainly behemoth. Apart from being necessarily pushy, this rhythm duo were also alert to the funk, providing a supple springboard for the ebbing and flowing of collective guitar-thrang.

At first, axes were mostly stroked, creating a communal shimmer, but as the movements progressed there was a greater tendency to strum hard riffs, setting up a large ensemble incarnation of a Velvet Underground-ish mesh-of-metal. Sonic Youth have clearly descended from Branca and Chatham, with Thurston Moore having worked with both composers, as a stripling. A major object of "A Secret Rose" was the long-term courting of tension, the work's length facilitating serial build-ups and releases. For most of the gig, Chatham's own guitar and amplifier were left untouched, which gradually began to build up another kind of tension. When was he himself going to pick up and join the fray? Very close to the conclusion, he decided to do so, but it looked like he'd forgotten to turn on his amplifier. After this brief snag, Chatham was soon adding to the construction, turning to face the audience. The sonic levels moved from subtle to overloaded, although there was a feeling of natural pile-up rather than artificial volume boosting. If matters became loud, this was because there were many voices, not because each amplifier was cranked up to 11. A significant rush arrived during the climax of the third movement, where some of the players started pogo-ing, as if they were playing in a (relatively) tiny punk combo. A Mexican wave of machine heads took place, as if in homage to The Shadows. To follow, the piece settled back down into a slower exploration of hovering textures, but then rose up again for its final blooming. Even so, the preceding extremes of excitement weren't revisited in full. There was much energy and ingenuity to bathe in here, but ultimately the knitting of the players and music didn't quite connect at a totally optimum level. They got pretty darned close, though..!


Brooklyn denizen David Grubbs came to light as a member of Bastro and Gastr Del Sol, in the 1980s and '90s, but this old Chicagoan has since refined a reputation as a solo performer, and an individualist in general. He turned up at the Canal Basin of Coventry on a quiet Monday night, barely coaxing out 10 punters, after around five had already departed, clearly attending as buddies of the opening act. Richard Allen is a local acoustic guitarist and singer, completely indebted to the style of Nick Drake, but sonically amiable despite a lack of originality. Grubbs sounded like a more evolved representative of the troubadour tradition, emerging from a completely different background of discordant rock contrariness. Still singing, still accompanying himself on guitar, but now it's electrified, and the vocals are flatter, more narratively inclined. Several tunes were instrumental, allowing Grubbs to expose his soundtrack-shaping techniques, playing with distortion decay, manipulating ends into beginnings, bleeding notes from one phrase to another, bending with control. This was an intimate recital that had its advantages. Usually, The Tin (previously known as Taylor John's House, and sadly re-named) pulsates to a bigger crush of bodies, but it remains a homely joint to experience music even when bordering on the empty. It was easier for Grubbs to chat naturally to the gathering, relating the background to some of his songs, particularly with "I Started To Live When My Barber Died," which was equally notable for its content and its verbal introduction.


Some artists are destined to trade on a specific appeal, instilled in players of their shared instrument. Guitars are probably the most popular choice of all, for amateurs and professionals alike, so this French picker has a pre-existing audience of willing supplicants. Pierre Bensusan appeared in the intimate surroundings of this arts centre's Hexagon Theatre, where seats are stacked up in micro-collosseum fashion. His current tour celebrates 40 years on the road, which are viewed by Bensusan as being akin to some never-ending global tour. He seemed pleased about this situation, though, and set off on a single set that would eventually run to over 90 minutes, becoming quite a challenge when sitting in seats which feel more cramped than usual without the relief of an intermission. The theatre's vertical incline is somewhat sharp.

The nature of solo guitar music is such that it's best heard with a break in the middle, but Bensusan felt compelled to play a single chunk, fearing the potential dispersal caused by a global sporting event that this column is determined not to name. In itself, the playing was impressive in its technical mastery, full of inspired decoration, finger-twisting flourishes and emphatic drama. Unfortunately, as the tunes accumulated, they began to sound worryingly similar, most of them being original compositions. Fiddling with his laptop, Bensusan was seemingly in control of his sound balance, adding reverb which was too much, and powering the p.a. speakers too high in such a close-quartered space. Bensusan's singing sounded closest to a flighty Cameroonian weightlessness, as mastered by Richard Bona, possibly with Brazilian influences, but once again, as the Frenchman slipped in a vocal number here and there, they ended up being very close bedfellows, melodically speaking. The nature of the themes were sometimes quite bland, but Bensusan was clearly impressing many members of the specialised gathering, as he reminisced about the guitar lineage called up by various tune dedications and stylistic cap-doffings. Ultimately, he offered a personalised string-language that shied away from being termed jazz, blues, gypsy, classical or folk, flirting with aspects of all these. Whether this made Bensusan's music aimlessly undecided or poly-culturally diverse, it was in the ears of the audience to decide.