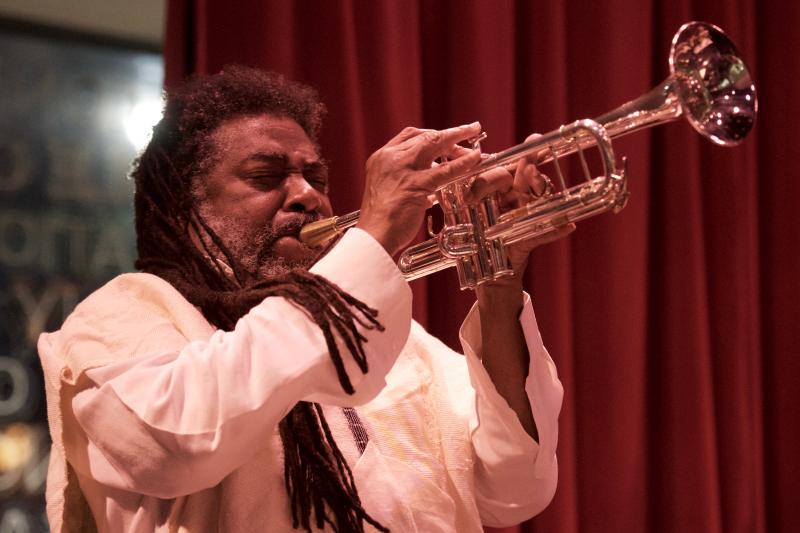 By MARTIN LONGLEY
September 14, 2017
Sign in to view read count
Phantom Station
The Stone at The New School
June 17, 2017

The Stone is pulling its shutters down for the last time, come the close of 2017. John Zorn's excellent Alphabet City corner venue has spent 12 years being an uncompromising centre for questioning music, but its mastermind has now found a new home closer to Manhattan's more visible core. It was announced earlier this year that The Stone concept would become ensconced at The New School, in Greenwich Village, working together with that institution's forward-looking music department. Zorn has been cooking up this strategy with Richard Kessler, the executive dean for performing arts.

Unusually, the transfer began early, in June 2017, with gigs already being booked at the weekends (Fridays and Saturdays) as a trial-run taster, anticipating the fuller programme beginning in March 2018. At that point, there will be five shows each week, running between Tuesday and Saturday in the New School's Glass Box Theater, as it's officially known. This is a part of Zorn's generally heightened promoting activities during 2017. As well as the two Stones running in tandem, the saxophonist/composer has been busy booking gigs at other venues where he has close links, not least National Sawdust (Williamsburg, Brooklyn) and The Drawing Center (a small gallery in SoHo, Manhattan). Zorn has also been active in spreading the performances of his bagatelles, both in NYC and at festivals around the globe.

The new Stone has an almost eerie similarity to the old joint, although transposed to a gleaming new space, brightened by a glass frontage onto the West 13th Street sidewalk outside. In the summer, it's quite light inside, although the windows are covered in engraved lettering of varying sizes, obscuring the audience in their secret, alternative activities. The Alphabet City reproduction black chairs are set out in the same row-patterns, with the same number of 74, and there are red drapes behind the floor-level stage area. The floor is shiny black, the walls are white, scattered with several pillars, and the toilets are 'gender neutral.' The p.a. speakers are tiny but powerful. The ceiling has exposed pipes and lights, all painted black.

Bey's voice is pitch-stretched down to a low drawl, as he sings into his laptop, whilst Hardedge uses four cd- spinning decks and a mini mixing desk to collage his samples, and Lewis interjects spurts of tough rhythm, as Ross works on the abstract space surrounding, an expert atmospheric shaper, guitar notes spread out into twinkling clouds. As Bey intones his poetry, his volume is way too high, both for the size of the room, and compared to that of his playing partners. This is one disadvantage of controlling the mix from an onstage position. A huge distorted beat lumbers in, and Bey hikes the volume even further, surely unaware of how much pain he's causing. Ross solos with bite, but he's a touch dominated by the electronics, as Bey's monster-slow vocal effect increases. In response, the guitarist rips out a howling solo, and Lewis scatters tight fills, welded to the immense electro-tromp, Hardedge introducing a sub-bass thrum. The spread is often of an ensemble nature, intent on working together in the name of texture and vibration. "The Sidewalk Is Not A Bed" is a more ethereal number, with fragmented electro-matter and powerchords against a slithery beat. With more control on the mixing desk, this set would have been massively improved, so concerned was it with the rising and falling of layers, or shifting of sonic ascendancy.

Trumpeter Wadada Leo Smith's "Love" appeared to be a blend of composition and improvisation, with the expected haziness of lines between the two forms. He played a two-nighter, parts 1 and 2 of this piece, with the second evening featuring a pair of guests, Sylvie Courvoisier (piano) and Susie Ibarra (drums). Smith's core colleagues were Jen Shyu (vocals), Bill Laswell (bass) and Pheeroan AkLaff (drums). For this gig, there was a sound engineer at the mixing console, ensuring a good balance of elements, and sometimes feeding in supportive pre-recorded trumpet content, towards the fuller climax of the performance.

The players leap right in, en masse, their leader blaring with a serrated edge, conducting staccato strikes, which lead into a sparse vocal/piano section, with faint trumpet striations. Smith is on bristling form, collecting a halo of energy around his being. It's intriguing to catch Laswell in freer mode, as a sideman rather than leader, so here less inclined towards establishing dominant grooves. Smith strikes again, prompting forceful ensemble blows, with a crashing of detailed twin-drum patterns. Ibarra is the more inventive of the sticks-pair, continually introducing fresh approaches, playing with fingertips, rubbing, striking and booming, with varying degrees of sensitivity, flicking and flashing on cymbals. It's akLaff who takes care of the underlying thrust, using a more direct free jazz language. Shyu ends up being too omnipresent, rarely resting on the vocal front. Ultimately, Smith's split-nature of freedom and control attained a dynamic level, and his choice of players was impeccable, creating a rarely heard combination of styles and stances.