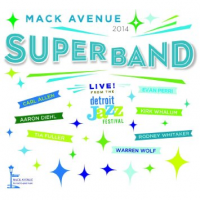 Bands fostered by labels and sourced from their stables are nothing new. The concept itself has always carried great possibility, but many a label has dropped the ball on the artistic responsibility side of the equation. At their worst, these types of get-togethers have come off as incongruous gatherings that are crudely slapped together. The concerts and/or albums that often fall into that category typically have one thing in common: they're there to make a quick buck and nothing else really matters. But not every label gathering is made for that purpose. A label band, when done right, can help to showcase artists while displaying and furthering a sense of community. The Mack Avenue Superband projects prove that point.

So what exactly makes this album and its two antecedents work while other such projects have failed miserably? There's no easy answer, but organization and attention to detail may very well be the keys to success. This gathering may take place on one fine day, but the band's music director—bassist Rodney Whitaker—starts to formulate a plan several months ahead of time, reaching out to the musicians to put together a program where everybody has input. So while the seven musicians featured on this album may not be the most stylistically well-matched on paper, with relatively straight ahead players, a gypsy jazz guitarist, and a smooth-gospel saxophone star joining forces, they're all on the same page from beginning to end and there's a spirit of togetherness here that's refreshing to encounter on such an offering.

Everybody involved with this album knows the drill and comes prepared. Whitaker, his longtime drumming partner Carl Allen, Hot Club of Detroit guitarist Evan Perri, and pianist Aaron Diehl have all been on board for both of the previous incarnations of this group; vibraphonist Warren Wolf and saxophonists Tia Fuller and Kirk Whalum have each taken part in one of these gatherings before. Here, they all gel beautifully in various combinations. Whalum and Fuller blow atop the rhythm section with vim and vigor on the former's "Bipolar Blues Blues"; Wolf and Perri prove to be surprisingly well-matched partners, locking in together on Herbie Hancock's "Riot" and pulling from the same stylistic bag on Perri's Spanish-tinged, Chick Corea-esque "For Stephanie"; Wolf's vibes, Fuller's soprano, and Whalum's flute meld and move gently atop the light Latin flow below on Whitaker's "A Mother's Cry"; and Diehl's gifts as a genre-blind player with exquisite taste and an enormous musical vocabulary come to the surface on his own "Santa Maria," a piece which opens on three-and-a-half minutes of expression-rich piano exploration before taking shape as a swinger that vacillates between lightheartedness and resoluteness.

This edition of the Mack Avenue Superband has much to offer, proving that the difference between success and failure with label bands rests with the execution and the chemistry. With sound planning and the right participants, a label concoction can be a very good thing.