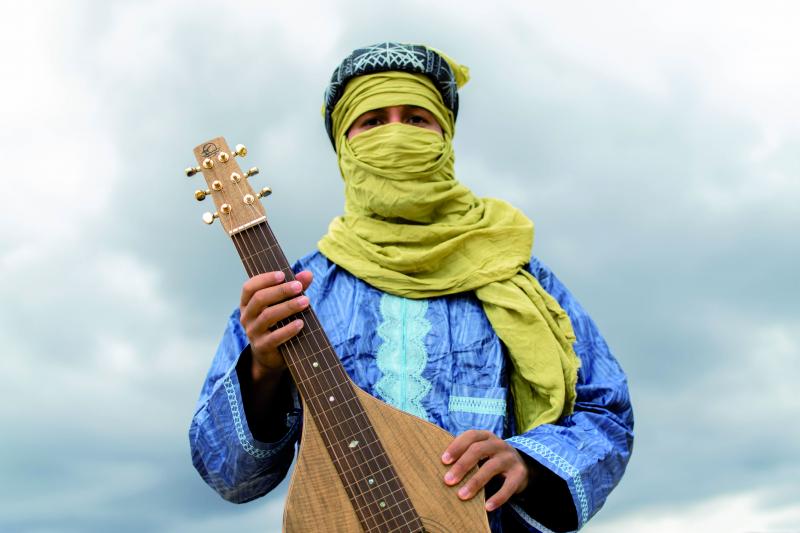 The acoustic blues weekender at Pocklington Arts Centre has become a regular fixture, led by the English guitarist Michael Messer. He combines daytime tutorial workshop sessions with a Saturday night performance that features guest appearances by the attending players, some of whom have their own recording careers long in place. This year, Messer also invited Faris, an Italian-Algerian singer and guitarist of Tuareg descent, meaning that the desert blues were inevitably on the horizon. Faris was on hand to teach that style, complementing Messer's more familiar bottleneck lessons. This was Faris's first gig in the UK, and the choice of this small country town in the East Riding Of Yorkshire provided a somewhat alternative setting.

Messer is a committed hardcore blues specialist, placing "You Gotta Move" close to the start of his set, the traditional spiritual, as interpreted by Mississippi Fred McDowell. Messer's low-level vocals and soft bottleneck flourishes lent themselves to a subtle reading, bringing in a light foot-tread for "I Can't Be Satisfied" (Muddy Waters), beginning to heat up, before being joined by three of his 'students,' including Stuart Earl, who had his latest disc on sale at the merch table. Earl pushed the character towards a mainline singer-songwriter mode, several steps to the side of the blues, although Messer kept his strings sliding resonantly, almost heading for Hawaii with his sustained vibrato weep.

When Faris took to the stage, following a break, there was a marked intensification of the atmosphere. Messer and company had been sitting, playing quietly, while Faris was standing and turned up louder, his voice also crackling with amplified energy. His style features detailed ornamentation, not massively bluesy, as promised by Messer earlier, but more in keeping with the general orientation of Tuareg music as played by the likes of Tinariwen, Toumast, Ezza and Tamikrest. The striking difference being that all of those acts feature electric guitars, distorted, burning and grainy. Here, Faris was displaying an acoustic aspect that allowed much more detail to be discerned, a silvery density of cascading notes. Clipped and muted phrases added to the detail, as each new curlicue emerged. After around 30 minutes, he brought out a lap steel guitar, edging nearer to the American blues, a hushed minimalism developing from both Faris and the closely gathered audience. "I don't care where they go," he repeated, switching to English, starting to become increasingly Ry Cooder-ed.

Not simply a Scottish combo, Blazin' Fiddles travel right down from the far northerly Highlands and Islands. They've been together since 1998, but still emanate a youthful vigour, not least because their line-up has been rejuvenated down the decades. After a series of departures in recent years, fiddler Bruce MacGregor (from Inverness) is the only original member left in the ranks, but his playing and personality are well up to the demands of fronting this outfit. He's a garrulous host, full of amusing stories and background explanations. The fundamental concept is to have four fiddlers to the fore, backed up by piano-keyboards and upright bass. For much of the performance, all fiddles remain on full thrust, simultaneously sawing away at tripled tune-clusters, the menfolk clumping with their boots to provide percussive emphasis. The individualities of each fiddler shine forth more when they take a break from the group bounding to engage in spotlight sequences, usually in duo or trio formation, alone either with piano or guitar, or both of these. This is a canny move, facilitating greater variety as the evening's two sets cantered along.

The first few numbers were full-tilt, but then the first threesome teamed MacGregor with fellow fiddler Kristan Harvey and acoustic guitarist Anna Massie. The latter soon picked up her own fiddle, once the rest of the band rejoined, just for one number, making it a five-violin assault. The repertoire mixes ancient pieces with recent originals, often within the same tripled sets of tunes. As the gig progressed it became increasingly questionable how much keyboardist Angus Lyon was needed within the spread. Much as your scribe enjoys free-form peripherals (Allen Ravenstine's synthesisers in Pere Ubu, for instance), there was a clumping quality to Lyon's frills and embellishments that often sounded completely out of keeping with the overall flow. He may well have been attempting to bring in elements of boogie woogie and/or free jazz, but these usually ended up sounding clumsy, and at odds with the rest of the players. His inhabited tonal regions frequently conflicted with those already colonised by the fiddles and bass. At times, this became an active impediment. Lauren Maccoll was filling in for Jenna Reid during this tour, her showcase with Massie involving a set of marches, which made a change from the usual fare, before getting back to the strathspeys with Lyon and chief boot-clumper Rua MacMillan. Not surprisingly, for the final rush of manic bowing, all fiddles were firing, a hectic hornpipe hitting hard, as the climax drew nigh.

The following night at the National Centre For Early Music, a different kind of folk tradition was revealed, by the Hungarian band Söndörgő. This was part of a typically extensive tour, as is customarily assembled by the Making Tracks organisation. If we were expecting fiddles and cimbalom (Hungary's indigenous hammered dulcimer equivalent), then we would be disappointed, as this outfit specialises in the tambura (smaller lute), in its various sizes. This band plays a form of Hungarian folk music not typically heard out on tour, partially due to the inclusion of Serbian and Croatian melodies. The rest of Söndörgő's line-up consists of multi-instrumentalists who leap between reeds (saxophone/clarinet), percussion (goblet drum), double bass, occasional trumpet, accordion and tamburas that are large enough to look like guitars, even though they all have only five strings. This gig was only four from the end of a 12-date run, so the Söndörgő quintet were particularly fired up with the gusto of accumulated momentum. Three of the bunch are brothers, one a cousin, and the other a 'mere' school-buddy, the band now celebrating two decades together.

The performance was completely acoustic, which didn't hamper Söndörgő's projection skills, as all five also contributed vocals to several songs, resonating throughout this converted church space. The smaller the tambura, the faster Aron Eredics would strum it, in an arpeggio-ed whirlwind, combining rhythm with speeding solo. Then, the accordion zoomed at its most quickened rate possible, but just to preserve our tickers, it was taken down slow and sensitive for the next number, trilling with emotive dexterity. This deceleration provided only a brief respite from their virtuoso racing, as clarinet and darbouka/doumbek (goblet drum) tussled, and their bassist switched to booming out on a big drum, with wild gypsy clarinet ribbons, drone accordion, and tiny whistle, displaying how a quick switching of instruments could jerk their sound into a completely different shape. The most effective contrast occurred when all band members produced a joint strumming, volume restrained, swelling via group relay, humming around the church rafters, imparting a minimalist, hovering aura that was strikingly out of keeping with their speedster majority. Which is not to say that we weren't also hotly anticipating their next duelling tambura section, to satisfyingly bringing this excellent show to a close.