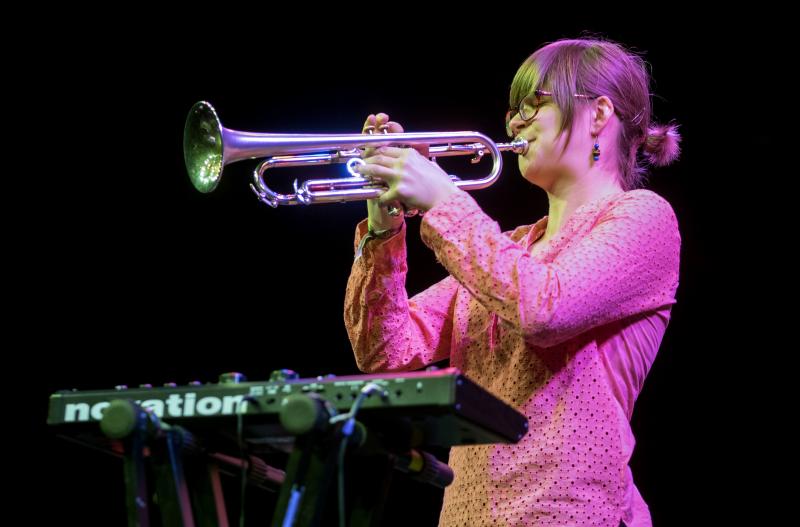 Dinosaur are one of the UK's fastest rising new bands, although their recent re-naming hides a few years of history as the Laura Jurd Quartet. The London foursome still look even younger than their actual ages, thus qualifying as fully fresh-faced. Trumpeter Jurd's music (for she is the sole composer) is considerably older in its countenance, with much of its vocabulary reaching back to the electrified early-1970s sound of Miles Davis, re-configured via a more recent approach to this sonic palette. Jurd also plays a small keyboard, sometimes at the same time as she's blowing horn, her parts tending towards the robo-tinkling, thin end of the aural wedge. Additionally, she's responsible for some of the most nagging melodies, on her weebling keys, cheesily profound, a childlike Moondog-gy tone in tow.

Jurd's trumpet solos rise up out of a more mainline jazz tradition, crystal clear and sharply delivered. It's Elliot Galvin who takes the core keyboard role, his solos and themes more elaborately dwelling within the expected realms. The band invariably change tack when both key-operators are flying in together, adopting a vocabulary that's as much rock or electronic as jazz-orientated. Miles phrases abound in some of the themes, but sometimes exuded as a South African township variant. The third number arrives and Dinosaur's starting to cook, with "Underdog," as Galvin tears out a solo with a brutal edge. Jurd maintains a blistering flow, into a slugging blues creation, with some sharply clipped riffing. The extended "Primordial" is a heightened, vigorous version, when compared to that which appears on Dinosaur's debut album.

This is a band that's been playing together for around 25 years, and longer between some of its members. Trombonist Annie Whitehead prefers this unchanging plateau, as she's a believer in the ongoing rapport that develops between longtime bandmates and friends. Joining her for this debut York appearance are Steve Lodder (piano/keyboards), Jennifer Maidman (electric bass) and Liam Genockey (drums). The latter is unamplified, apart from his bass drum, so the volume is kept down to a reasonable level that settles well in this converted church environment. Except that perhaps his three cohorts are turned up a touch too loud, rendering the drums, rather disconcertingly, as the quietest instrument. This is only a small criticism, as the ears have a canny way of adapting under such circumstances, and your scribe is indeed sitting just in front of the left hand speakers, smallish though they are...

A large part of Whitehead's early years on the scene were spent being influenced by London's South African settlers, eventually leading to a place in Chris McGregor's Brotherhood Of Breath. Understandably, this township vibration still resonates strongly in her chosen repertoire. The set opened with fellow trombonist Mosa Jonas Gwangwa's "Hamba Ngiyeza," with Lodder igniting almost immediately during his first solo of the evening. He's burning up repeatedly during the next few numbers, running an abstract race at the top end of the piano keys, jackknifing sideways across Genockey's limber time. Lodder's angular, spiky clusters are at odds with the joyous bounce of the first few tunes. Catching Genockey's eye, the pair are locked in a rhythmic feat of acrobatics, stopping and starting, then switching the groove emphasis spontaneously. Whitehead and Maidman are playing well, but they aren't quite hooked into this energy wave. Genockey shuffles and skips with his organically dampened rotations, rolling precise patterns around his skins, shifting accents as he runs. Whitehead and Lodder are sensitised to these rhythm-shunts, responding in accord, with paired percussive parts.

Next, Whitehead dedicates "Platform One" to another old playing partner, the long-departed drummer John Stevens. The piece opens with free rumbling, as if we're down at the train station, the trombonist's harmonised sound passing through a flapping rubber mute. A more conventional jazz fusion structure develops, leading towards a new tune (again with a South African feel) which Whitehead momentarily forgets, commenting that such dangers are all part of the excitement of debuting unfamiliar material. She enjoys being scared by uncertainty. Indeed, this often leads to a tension that produces a sharper edge. Again, some of the soloing is interfacing with the beats at unpredictable angles, particularly from the always-mobile Lodder, who's still the most fired-up player onstage. At odds with the beat, which is at odds with itself. Maidman makes her bass sound like a tuba, disembodied into pure lowness during one particular solo. A dedication to the alto saxophonist Dudu Pukwana opens the second set, establishing a cheerful bounce, which is dispersed during the spacey "Hubble," where Lodder turns up the 1970s keyboard sounds too high. The mood of this varied set switches again, to the ska trot of "Eastern Standard Time," courtesy of another 'boner, Don Drummond, of The Skatalites. The close of a set that eventually pushes the gig over the two hour mark is "Tranquillity Base," possessing a moody momentum that slows the funk down into an ambient electronica rhythm, the piece concerned with steadily building atmosphere for a softer landing. This second set would have benefited from a 20 minute trim, as it started to reveal a certain tendency to repeat soloing structures within each composition, often a problem when jazz becomes overly habitual.

Brooks Williams is a bluesman, yet not a bluesman. During a two-part set, this American songster interprets several hardcore numbers from the repertoire, but he also inhabits the generally rootsy terrain, tasting country, folk and Cajun, as well as contributing a significant amount of original compositions. His methods are broad, but always deeply skilled. Williams has been living in England for some years, but originally hails from Statesboro in Georgia, which he describes as being somewhat less cool than Savannah, a quainter, more historic and musically rich city. Opening with Memphis Slim's "Mother Earth," Williams immediately displays his skills on a wooden-bodied resonator guitar, before switching to a straight acoustic for Blind Willie McTell's "Statesboro Blues," just to prove that his home town isn't entirely bereft of significance. The Williams bottleneck attack is hard, coaxing out the natural rattle of his strings, in a briskly strutting version with a pickin' solo. He also rolls out deep basslines, simultaneously addressing the lower regions of toasted warmth, as well as the knifing trills. Williams lets the high notes float, then flicks in filigreed twists, these guitar acrobatics an extension of his vocal mobility and grace, slipped in between each easily-delivered line.

Already an impressive guitar merchant, Williams then reveals his three-stringed cigar-box axe, which is certainly no impediment to his virtuosity. "Sittin' On Top Of The World" follows, and then his own "Nine Days Wonder," also on the cigartar. He finishes the first set with a suitably rockin' "My Turn Now," his own song, inspired by the Isle Of Man's famed TT motorbike race. The three-stringer stays for "Darkness," a raspy blues stalker ('darkness is the horse I ride'), vocals and strings united symbiotically, with low-strung bendings and serrated strums. As the second set progresses, Williams becomes increasingly burrowed inside the dark core of the blues, delivering Bessie Smith's "Back Water Blues," as New Orleans vibrates in flooding sympathy with Old York's recent river-rising: 'it thunders and lightnins, and then the wind begins to blow.' Williams slows and savours these lines, concluding with a double encore of the traditional "Hesitation Blues" and his own song, about the complete lack of furniture in the house of a guy called Bob...

Koshka are a gypsy jazz trio, formed in Glasgow, back in 2001. The line-up features native Scottish guitarist Nigel Clark and a pair of Russian violinists, Lev Atlas and Oleg Ponomarev. The latter is the outfit's chief composer, and most of his tunes exude a Russian aroma, rather than a general Eastern European country-hopping of stylistic traits. This means that the compositions frequently load up with dramatic flair, not least in their tendency to accelerate in a manner which can sometimes sound clichéd, in terms of what the outside observer might naturally expect from Russian folk music. Koshka also create a good deal of variation in dynamics, with pizzicato strutting jolting sideways towards spiralling romantic flourishes. It's a virtually all-acoustic performance, with microphones set at low level, barely boosting the natural sound of each instrument. There's much halting and clipping of notes, making up for the lack of a percussionist, with many of the pieces containing multiple sections within a very short duration. The programme is winter-orientated, with the imposing singer Maria Atlas guesting on a few numbers, adding another distinct dimension to the repertoire, voiced in Russian, French and English. There's also a violin duo section, played as if these axes are ukuleles, then another tune that has each bow re-assembled so that the strings are nestled between wood and hair, gypsy-fashion. Koshka's pair of sets were both of a briefer, classical-type duration, but this was justified by the speed, density, invention and detail of the trio's playing.