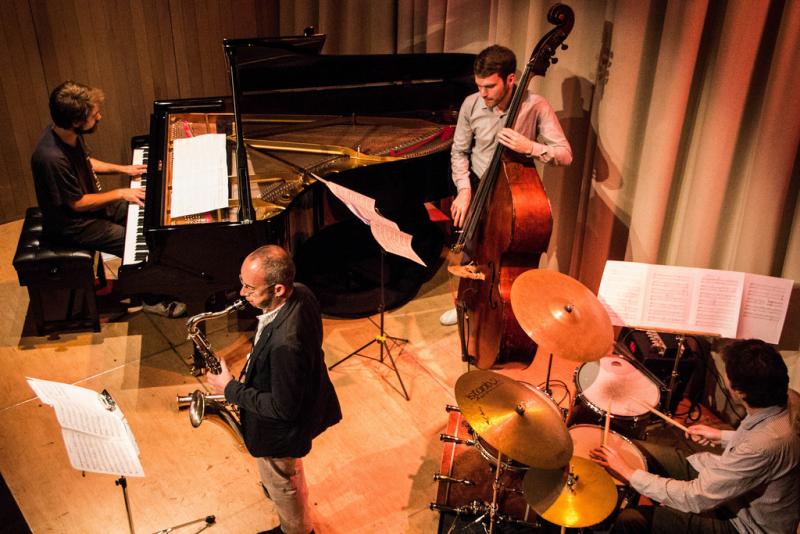 By MARTIN LONGLEY
October 31, 2013
Sign in to view read count
The Julian Argüelles Quartet
The University Of York
October 12, 2013

Saxophonist Julian Arguelles grew up in Birmingham, spent much of his career in London and can now be found stomping around the coastal village of Belhaven in Scotland. Over the years, he's developed an ongoing relationship with The University Of York, on both the teaching and performance fronts. This gig gave Argüelles the opportunity to present his current youthfully spry cohorts, nearing the end of their tour and preparing to record a newly-composed suite. He was joined by pianist Kit Downes (now one of the most notable newer generation players in the UK, both as a bandleader and as part of Troyka), bassist Sam Lasserson (the least familiar member of this quartet) and drummer James Maddren (increasingly ubiquitous).

The first set delved into the Argüelles back catalogue, whilst the second half was entirely devoted to the new suite, as yet untitled. The performance was delivered in an almost completely acoustic fashion, with only Lasserman plugging into a low-volume bass amplifier. This created a reverberant sound that actually made it harder for them to conquer the space, but as the first set evolved, both band and audience began to grasp hold of the music's heated core. By the time we reached the suite, the excitement was fully charged in its emanations towards the large span of tiered seats. Argüelles stuck to the tenor saxophone during the first set, opening with his old chestnut "Phaedrus," then breezing through the unsurprisingly Spanish-tinged "Asturias," which was originally arranged for big band. "Mr. Mc" was dedicated to the South African pianist and composer Chris McGregor, with Downes cutting out to leave a trio formation, then the leader himself taking a similar break. Argüelles opened up "Peace For D" with a completely solo tenor introduction, then as his playmates entered the bounce, a subtly South African feel grew in strength.

The second set surpassed the first in every way, the quartet doubtless fired up by a relative unfamiliarity with the new material. The seven-part suite was challenging in its scope, intricacy and need for a sustained level of burning energy. For much of its near-hour's unwinding the chase was swift indeed, constantly filled with dancing interactions between the players, spurring each other on in the communal navigation of a complex narrative journey. Solos were picked up in relay fashion, as the highlighted emphasis kept changing its hue and its direction. Structures and relationships were unpredictable. In a way, they weren't even solos, but more like raised voices during a lively discussion. Argüelles took up his soprano saxophone, reeling out a coruscating spiral of extreme high notes, pushing the edge of the music closer to freer waters, latching onto a further out-there borderline when set beside the more harmonious compositions of the opening set. Here, there was tension and release, many times over. There were a succession of beautifully sustained repeat climaxes, as each fresh wave of resolution arrived. Argüelles was correct when he observed that hardly any dates on the tour had featured an encore, due to the satisfying surfeit of demanding and compacted sonic activity. Nevertheless, the hardy York crowd clapped them back for more, and the quartet chose a completely contrasting ballad standard to close, "You Don't Know What Love Is" allowing the breathiest of soft tenor exhalations to send this audience off into the blustery night.

Two out of the three original members of Echo & The Bunnymen have recently formed Poltergeist, an instrumental outfit creating sounds that are quite distant from that old post-punk foundation. This solves the problem of being eternally compared to their old output, saving the challenge of having to replace singer Ian McCulloch under the demanding glare of nostalgic fan-expectations. Guitarist Will Sergeant is still an active Bunnyman, but bassist Les Pattinson is no longer involved, having departed on at least two occasions. The drumming position is filled by Nick Kilroe, who is the Bunnymen's latest sticksman. So, Poltergeist represent a significant part of rock history, even if their music offers something unfamiliar to their following.

This was the final night of a 10-date tour. There were very few shreds of long-raincoated, floppy-fringed mordancy. Instead, the threesome sported lightweight white hoodies, all the better to soak up the retro-exotic movie clips that constantly flickered on the white backdrop, amplifiers also draped in white sheets. The lights were low, and the band personalities were kept in check, sympathetic to the collective accumulation of rhythms, riffs, repeats, textures and tones. Sergeant's guitar is pivotal, despite the nimble basslines of Pattinson. The guitar was ridiculously widescreen, bolstered by Sergeant's pre-recorded layers. At first it seemed as though he was live-looping, but then it became apparent that this surface-feel pile-up was beyond the means of one man's foot-pedal. As if on a mission of contrast, Pattinson's bass was earthily shorn of its reverb, grittily physical in its dry-twanging intricacies. Sergeant knitted together elements of surf-twang, haunting spaghetti delay, Robert Fripp-ian block-escalations and his own trebly cluster-cascades. He rarely sought to impress with speed or gratuitous dexterity, choosing an emphatic progression of rumbling, surging, bleeding, howling, grinding and thundering phrases, labyrinthine in their sludgy evolution. At one stage, he hoisted a double-necked electric axe, its top half ranged with 12 strings!

Some of the faster sections sounded akin to Joy Division's sonic sphere, but the overall style stemmed from prog, post and psychedelic, underpinned by the cycling belligerence of Krautrock. The volume was mammoth. Even though cheery communication with the audience was certainly not the point, there was the feeling that occasional satisfied or even surprised half-smiles signified that the band believed themselves to be cooking, enjoying themselves as much as we bleeding-eared stalwarts in the audience. This was very introverted and uncompromising music, translated into a highly entertaining experience. The excitement lay in the slow tension, the slow-building stasis and the eventual resolution of the almost-eternal twang, before another mantra mood opened up our mental guts.

Feelgood were on fire for this gig! An eager crowd established their personal vibe straight away, with a strong dancing element down the front. Yes, this band have always specialised in a twitchy, nervy, high-strung variant on blues-rock, rhythmically wired in a post-Bo Diddley manner. Their bluesy rock'n'roll has always smelt of garage-ey grime. The news had recently arrived of guitarist John 'Gypie' Mayo's demise, and when singer Robert Kane was dedicating the set to his memory, we were almost expecting him to reveal that the cancer-stricken Wilko Johnson had departed. Mayo took Johnson's place in the band back in 1977. Feelgood's current line-up is made up by the players who surrounded the also-departed founder-singer Lee Brilleaux during the 1980s and beyond. There was the feeling that the sudden news of Mayo's death added to the desperate vigour of Feelgood's performance. The historic repertoire was continuing, relentlessly, sounding as vital as ever.

The set shot past in a condensed spurt of manic rockin,' dominated by the chopping, strafing, scratching guitar work of Steve Walwyn, who had his own personal fan club crowding around his side of the stage. There were tensely-coiled readings of "Back In The Night," "She's A Wind-Up," "Milk & Alcohol," "All Through The City," and a blues feature for Walwyn with "Rollin' And Tumblin.'" The 70 minute set continued with a 20 minute encore, taking in "Riot In Cell Block Number 9" and a medley of "Bonie Maroni"/"Tequila," from the live set right back at the beginning of the combo's career. This was a rollin' extension, but failed to match the energy of their actual core set. It would have been virtually impossible to maintain that same pitch for a full 90 minutes.

Here's another blues-rooted combo, but emerging from the music in a completely different direction. They have southern boogie-grind rather than southern pub-rock roots, with much bottleneck usage, for maximum slide-friction. The old trio line-up has undergone a presumably temporary change with the replacement of longtime bassist Chris Chew by Lightnin' Malcolm, who is an already established bluesman. At first he was sticking to his chosen axe, also contributing harmony vocals, but before too long he was swapping guitars with erstwhile frontman Luther Dickinson, playing lead licks as well as taking the main vocal role. This was only the beginning of the threesome's changeovers, as drummer Cody Dickinson was soon stepping out front with his brother's guitar, leading a few songs with his own vocals. Instead of impeding the flow, this added unpredictability and excitement to a lengthy set that started off slightly sludgy, the band taking a while to lift off into the rolling boogie zone.

The NMAS suffered from comparisons with the Feelgoods on the previous night, with their special, live-wire ambiance. Otherwise, this would probably have been perceived as a more rousing performance. The NMAS struck a good balance between tight storming from one number to the next, with a casual looseness that made parts of the set possess a relaxed jamming playfulness. Like Feelgood, there were several old chestnuts from the classic blues repertoire, this time including "Sittin' On Top Of The World," "Rollin' And Tumblin'" and "Hear My Train A'Coming," which metamorphosed into "Mystery Train," in an electrified washboard showcase section, as Cody Dickinson moved centre-stage once again. Luther had many chances to shine, even though he was sharing the guitar soloing duties with Malcolm. Their competition meant that the crowd couldn't lose, as each vocal/guitar spotlight escalated the tension. Luther's own unique stretch arrived with his brandishing of a home-made guitar with a tin can soundbox, a two-stringed expansion of the primitivist blues axe 'popularised' by Eddie 'One String' Jones. This included singing straight into its tin can pick-up, for maximum gutbucket authenticity. To end the set, the trio invaded the audience for a drumming walkabout, sounding like a black Mississippi fife and drum band, minus the fifes. It must have been an almost-capacity crowd, parting its waves as the threesome got lost, continued their snaking until they found the stage-entrance, then left the building well-sated by their monumental bluesaboogie.