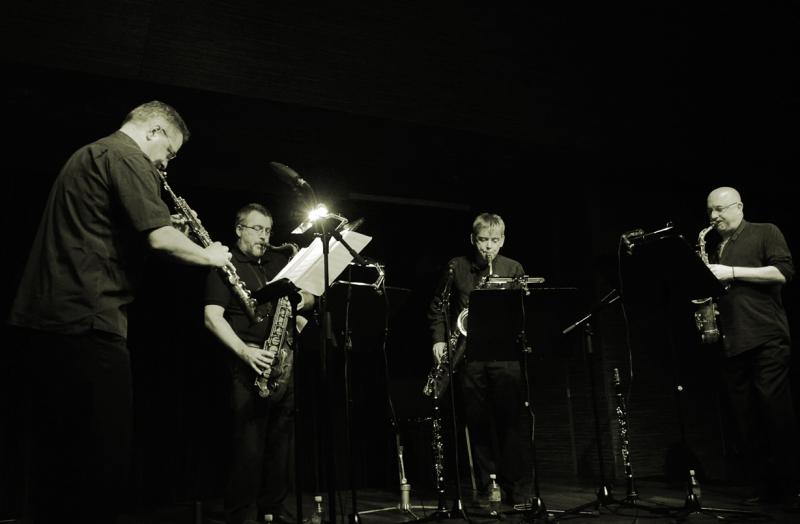 The Delta Saxophone Quartet's best-known album is Dedicated To You, But You Weren't Listening (MoonJune, 2007) which tackled the music of Soft Machine, particularly concentrating on the the output of bassist/composer Hugh Hopper. Delta is a group which ostensibly exists within the modern classical sphere, but this gig emphasised the expansiveness of their musical concerns. The set shifted focus from minimalism to ambient to rock'n'roll, with all trades given a governing voice through being arranged for saxophones. The Chapel of York Saint John University lent an appropriate aura for the spiritual shimmer of Arvo Part's "Summa." Originally a choral work, then transposed for string quartet, the piece continued its journey through Delta's tubes. Chris Caldwell (baritone) and Pete Whyman (alto) are the old guard members who have been running the quartet for three decades, joined by Tim Holmes (tenor) and latest addition Shaun Thompson (soprano). Whyman is principally known within the jazz world as a longtime cohort of Mike Westbrook, and Holmes was a member of another saxophone quartet, Itchy Fingers.

This gig was certainly an underground phenomenon, seemingly designed for denizens of the university only, but your reviewer espied a flyer at York's competing academic edifice two days earlier. The attendance in The Chapel (literally the campus chapel) was adequate, but there were a few more pew-spaces left vacant that would surely have been filled if the publicity had been further-reaching. The programme made a deliberate journey from the first to second halves. Philip Glass and Steve Reich nestled comfortably beside each other, with the Mishima soundtrack opening movement running into "New York Counterpoint." These, too, featured re-jigs from strings (Glass) and clarinets (Reich) to saxophones. Delta also revealed two short sections of their new commission for Mark-Anthony Turnage, his "Run Riot" starkly shunting away from minimalism into a less predictable landscape of dynamic change. A hint of the second set's rockier material came with "Swan," a piece by local York dweller David Lancaster, belching with a funkier breath, after having set a harmoniously contemplative launchpad in its earlier minutes.

The second half introduced pieces by writers whose roots lie in rock, even though they are amongst its most wayward practitioners. Ryuichi Sakamoto's "Merry Xmas, Mister Lawrence" heralded David Bowie's "Art Decade" (the English chameleon starred in the Nagisa Oshima movie that used the Japanese composer's soundtrack). Lancaster provided an arrangement of Brian Eno's "Music For Airports," requiring Delta to exchange saxophones for clarinets. Then it was back to Bowie for "Speed Of Life," another one of his instrumentals. This was the only number which didn't quite survive its transmogrification, with tonalities that didn't sound exactly right, which is not surprising given the skewed sonic terrain of the original. The evening climaxed with a couple of Soft Hopper works, "Facelift" and "Mousetrap" nudging the nature outwards to slugging jazz-rock territory.

Ultimately, Delta didn't reach unhinged levels of virtuoso entanglement. The performance was more studied than that, this calmness no doubt imposed by the formal mood of the gig. Caldwell did his best to personalise the programme with directly communicative introductions to each piece, in lieu of any programme notes. Delta made some wise musical choices, the selected works complementing each other. These compositions displayed a gradual shift through the history of a certain kind of adventurous art music, over a chosen period of five decades, from the 1960s up to the present day. Delta inhabit a pleasing hinterland between jazz and classical: not too wildly untamed, and not too woodenly rigid. Their choice of composers was exemplary, the execution skilled and the venue was partially suitable, though it would have been good to gather in all of this music in a jazz club environment.

In recent years, the Malian kora player Ballaké Sissoko has built up a shining reputation by collaborating with French cellist Vincent Segal. This latest UK tour allowed him to present the music of his homeland in its distilled form, joined by a four-piece combo with guesting vocalist. The gig at the NCEM was sold out in advance, offering a very rare opportunity to hear Malian music performed in York. Sissoko's bandmates were Fassery Diabate (balafon), Moussa Diabate and Oumar Niang (acoustic guitars). The leader came on first, demonstrating the silvery tones of his kora, its strings plucked with dazzling dexterity, sending notes cascading forth in a diaphanous blanket of spangle. Observing the suppleness of Sissoko's thumbs, he could have been the absolute smartphone champion of the city on that Saturday night.

The session's structure was precisely and predictably arranged, providing the sheer pleasure of assured anticipation as the audience watched each band member gradually take to the stage. Next was Niang, at first bearing the traditional n'goni, but then spending the rest of the evening with a 12-string guitar, ably reflecting the scintillations of his leader as he provided his own feast of string-tendril windings. Moussa Diabate stuck to plain ol' six strings, and his attack was sharper, revolving around stinging single-note phrases, though delivered at lightning speed and with maximum note-wobbling embellishment. As each musician entered, the weave strengthened, the melodies losing space and intimacy, but gaining in their joyfully swaying momentum. Fassery Diabate also took several spotlight sections, demonstrating great speed and sensitivity on the marimba-like balafon. Each player subtly moved forward in the spread, then receded to allow another member to highlight their part in the panorama. Then the final layer was revealed as singer Babani Kone took her place onstage. Instrumentals turned into songs, and the emphasis switched to a more pointed gyration. Kone's voice negotiated softly burred deep tones, then vaulted up to deftly controlled high notes, held in a hovering space. She had a very peculiar finger-snapping technique, which was initially intriguing, but swiftly became irritatingly over-used, distracting from the other players and giving the music's glide too much of an imposed rhythm. It's as if she was wanting to take the role of a calabash player. This was one small gripe amidst two substantial sets of absolutely spellbinding music.

It looks like Larry Miller lives to rock. Right from the outset, he was cranked up to maximum performance level, in terms of both adrenalin and volume. Here is a blues rock guitarist who has a similar appeal to that of Joe Bonamassa, Walter Trout, Rory Gallagher and Gary Moore. He teeters on the very brink of mainline rock'n'roll, but still grasps hold of a dirty Delta tone, blistering up the slick rawk solos. Miller also has designs on being a stand-up comedian, or maybe just a simple absurdist. Any tension he might have just built up via scorching pyromania can be instantly the fuel for self-mockery. It's clear that Miller feeds off the energy of his audience, seeking the warm glow of attention. He imagined himself playing to an empty house, even though the venue was packed with a fairly respectable mass of bodies for a frozen Thursday night. His nervy self-analysis reminded this reviewer of England's other blues wizard axeman, Billy Jenkins, in the way that lightning guitar string-singeing technique could ram up against music hall buffoonery. Miller was pretty adept at this conflicting balance of abilities.

His cohorts were all game for rucking, the keyboardist switching from gushing Roland piano to reeling Nord organ sounds, the bassist solidly pumping, and the steamhammer drummer an old hand in Gary Moore's band. Miller didn't bother having an opening act, as he started early and played for around two hours, with only a brief break. It didn't drag in the slightest. Miller and crew's exuberance was infectious. Most of the songs took ten minutes or so to develop their verse-chorus-solo-solo-solo curve, flying through "The Girl That Got Away," "Messin' With The Kid" and "Delilah" (which Miller turned into an emotive ballad, despite completely mocking absolutely everything just prior to its delivery). The only questionable move was playing Moore's "Parisienne Walkways" as an encore, which seemed like a too-obvious choice, and a curiously slow-moving tune with which to climax the night.

Blackbeard's Tea Party are an indigenous York folk-rock combo, with a penchant for hardy busking around the city centre. Not that they'd had much time for such activities prior to this date, which was the climactic homecoming following an extensive autumn UK tour. When considering folk-rock progenitors, the BTP are descending down the line of The Pogues or The Bad Livers rather than Steeleye Span or Jethro Tull, although their guitarist does hark back to touches of Fairport Convention's acidic stringbursting. It was a welcome surprise to find this basement venue heaving with folksy folks, ranging widely in age ranges, with a handful of pirates in attendance to boot. Okay, so we were on local turf, but it was still gratifying to find The Duchess so throbbing on a Friday nite. This well-populated state ensured the ease with which BTP almost immediately stomped their riotous presence, totally together and toughened by weeks out on the road. Indeed, the band now rejoices in a national reputation, making appearances at the major UK folkfests. Even though much of their songbook is traditional, the gang's delivery siphons the material through their own punky style tubes, to match the vocabulary of their original material. There's none of the preeningly self-conscious pomp found in a band such as Bellowhead. This bunch are more interested in the sawdust that soaks up all the blood, booze, vomit and sperm of ancient folkloric yarn-weaving.

Frontman singer and melodeon player Stuart Giddens joined the ranks a couple of years after the band formed in 2009, but is now established as a crucial member. Although retaining a modest image as a regular geezer, he casually operates as a bounding focal point, tossing off accurately phrased couplets with aplomb, in a voice that's pitched equally in folk and rock registers. We could still discern most of the lyrics to each song, but this didn't lessen the forcefulness of their delivery. The other sharp points of the combo's demonic trident of attack are fiddler Laura Barber and guitarist Martin Coumbe. Barber hails from the rustic friction side of the river, delivering solos with sawing edges and swift embellishments. Coumbe's axe strafes were never lengthy, but he managed to fill each decorative outburst with many notes that meant mucho, a smouldering distortion infusing his licks. The crowd did a lot of the work, but the players jumped in to feed off this energy, trouncing through a set that wheeled by in its dazzling variety of melodic convulsions. They didn't feel the lack of a conventional drummer due to the interlocking hand-slaps of their djembe/cajón duo. Song highlights included "Landlady," a tale of sexual stamina unbound, told with tongue-twisting swiftness, the self-explanatory "Mr. Slippyfist" and "Whip Jamboree," the title tune of the latest album. It was the wildest of beer-drenched nights, and at noon the next day, the piratical crew were back to busking in front of All Saints Church...