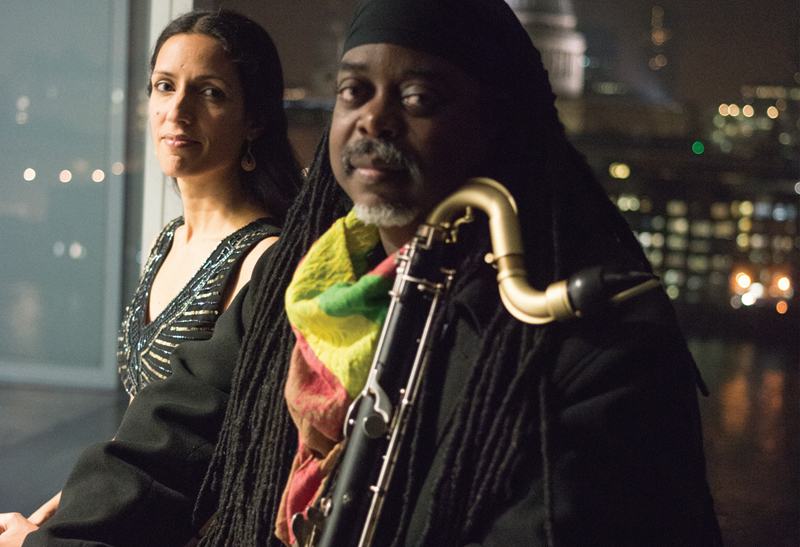 Courtney Pine's recent explorations have contrasted massively with the bulk of his career. Most of the time, he's fronted a fairly large, pretty driving and somewhat dense ensemble, its details changing but its powered, festival-orientated stance remaining quite stable. Suddenly, he's dipped down into an intimate duo format with pianist Zoe Rahman, who has lately been a band mate in the larger outfit. In this newfound setting he's elected to concentrate on the bass clarinet, and also to favour introverted ballad selections. Their album, titled simply Song (The Ballad Book) was released only a couple of months earlier. To crown the new experience, this gig at Pocklington Arts Centre found the pair in this quaint East Yorkshire town, playing in a much smaller theatre than is usually the case for Pine. Although well-populated, the gig wasn't sold out, which was surprising given that big name shows here always tend to reach capacity. Maybe the Pocklington jazz scene is under-explored, as the venue sell-outs are often rootsy, folksy or bluesy artists. Not that all of those musical types weren't present in this pair's wide-ranging repertoire. Pine joked that he doesn't get up to these wayward country parts too often, and appeared curious about how this audience would receive the music.

At first, the evening's tunes were taut with a nervous energy, flitting wildly from considered introspection to a pugilist expression. It's almost as though Pine had stored up vast reserves of energy in the dressing room, which needed to be released regardless of the material's softer nature. Rahman acted as the almost ragtime-ey rhythmic hoofer, combining mellifluous flamboyance with the practicalities of a romping suggestion of the beat. The two sets provided time for a gradually evolving character, with Pine eventually becoming less busy, starting to stretch out into the subtler corners of the largely classic standard songbook. Not really even particularly jazzed, but an older form of classicism, taking in popular stageshow numbers and spirituals, with a few 1960s-era pop/soul ditties completing the spread. Whilst Rahman maintained the approachable, dependable spine of each melody, she also took off on the occasional flight, but it was Pine who mostly delivered the dramatic extremes. Both sets enjoyed what might be called a challenging accessibility, sending tiny droplets down their knife-edge. There was a compelling, unpredictable balance between tender melodic tasting and regular eruptions of free friction, Pine picking out traits from the old-time experiments of Eric Dolphy, retaining a lush depth, but controlling a fine line of honed trebly squeals, often landing back home on the seductively familiar line of a tune. He imparted a ritualistic focus, striking up a dialogue with Rahman that seemed to be still in its youth, still unexpected to the participants, each time they probed and dissected an old favourite.

This integration of styles was particularly impressive given the mass popularity of the source material. It was quite a feat to take "A Nightingale Sang In Berkeley Square" on such a winding journey, with the possibility of the listener forgetting that this was the song that was still in motion. Phases flitted past, organically connected, but passing through varied emotional and sonic states. "The Windmills Of Your Mind" (penned by Michel Legrand) might be familiar as a pop pick, but Pine and Rahman heaved it onto the autopsy table for a friendly procedure of questing re-arrangement. Ultimately, it was the spirituals that offered the peak of poignancy, as "Amazing Grace" and even more so, "Motherless Child" were incarnated as epics of personal revelation. There was a seat for Pine, but he remained mostly on his feet, stalking to each side of the stage, as if finding new ways to project his voice, reaching out to communicate with his congregation, braids flying from under pirate headscarf, white smock flashing as he roamed off to another position.

The Illinois troubadour Ben Bedford made his debut at The Black Swan Folk Club on general election night, but he still managed to draw a reasonable gathering of the curious. Across nearly a decade, and three albums, Bedford has been shaping a distinctive songwriting style. His chiming guitar-picking style lay prickly beneath his smooth, resonant vocals, making ringing embellishments to songs that were mostly originals. He's deeply concerned with history, and mostly family history, as folk-singers should be, perhaps. He even managed to have his parents present, in the midst of their European sojourn. He gave his "John The Baptist" a percussively bluesy delivery, gradually recalling the mountain holler of Loudon Wainwright III. This could be a stylistic comparison, but Bedford is more subtly humorous than that older, more famous minstrel of cutting madcap anarchy. Even so, there's a similarity with Loudon's appropriation of blues, bluegrass and general old-timey traits, with Bedford's song about bluesman Charley Patton being particularly evocative of the LWIII character. One of his stand-out songs concerned The Fox, spinning the tale of an early environmentalist crusader and factory saboteur. Then there was Bedford's Civil War song, "Lincoln's Man," loaded with substantial lines. His songs are often ultra-specific, and specialised in their subjects, as with "Goodbye Jack," written to author Mr. London. Bedford is a youngster very much attuned to the past, which makes for a performance rich in literary content, as a bonus to the more expected anecdotal, songcrafting and musical skills.

Colum Sands is a radically different sort of troubadour, although still a master of historical observation. This son of Rostrevor, County Down sung-spoke his own introductory ditty, displaying his warm humour straight away. He began his career with The Sands Family, featuring siblings Anne, Tommy and Ben. He's also a record label owner and a radio broadcaster, amongst several other artistic activities.Sands has a gentle charm that almost fulfils the traditional perception of the mystical Irish creature, imbued with the pure essence of gratuitous tale-weaving. "I travel through hedges and ditches," he sang. "In search of the reason and rhyme." Sands soon revealed himself as the ultimate folk-guitaring sage, as he spun out his wise words. "They dream their dreams, take out their bins," he sings in "Two Angry Dogs." He plugged his book, on sale next to the room's entrance, but suggested that it might be best to merely fantasise about owning the tome. Always a wily, witty host, he took the almost capacity crowd on a tour of his life in Ireland and way beyond, his international touring activities lending Sands a deep connection with multiple cultures.