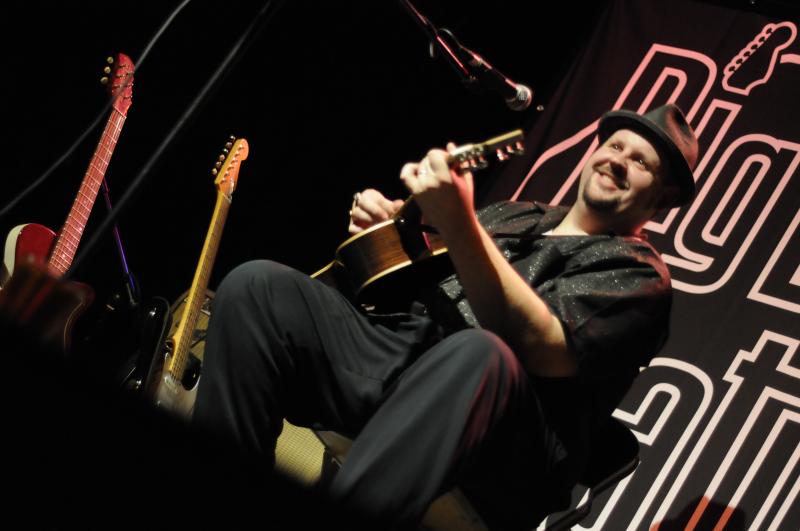 The Bloater returneth, just over a year after his last appearance in York. Back then, he was joined by his full combo, but this 2013 show was a part of the Big Boy's solo tour, making use of intimate spaces for maximum eyeball confrontation. The Basement is a very small den lying underneath the city's alternative semi-art cinema, so even though the audience was a highly discerning tiny huddle, it still managed to more than fill all of the available chairs'n'stools. Bloater held court from his personalized stage space, his tiki cocktail bar to one side, an array of guitars and an old Fender amplifier to the other. Amongst his treasures were a cheapo Korean almost-cardboard Danelectro and a hand-crafted three-string cigar box gutbucket axe, complete with bullet-shell pick-up bridges. Nestling under all was his own rug, inspired by a touring experience with Delaware boogiemeister George Thorogood, who had brought his own thick pile carpet along for the ride, as well as his special Hoover, in its dedicated flight case. This was just one of the amusing anecdotes dropped in by Bloater during the course of his nearly 90-minute set. The tales were often as long, or even longer, than the songs.

Last year's set trawled wider in style, but this time Bloater's one man repertoire found him concentrating on the blues. Classic cuts mingled with original compositions, their delivery also split between old school porch interpretation and instant layering via sampling foot pedals. In this way, Bloater managed to combine rootsy grit and high technology, all in aid of a directly down-home expression. His voice is best described as having an enjoyably sculpted hoarseness, deep and resonant. His guitaring moved from detailed thumb'n'finger picking up to the full whammy bar twangeroo, usually after having laid down a slapped "drumbeat," and a couple of chopping rhythm parts with his pedal-aids. Bloater's building-up technique might not be completely slick yet, but this all added to the general air of off-the-cuff jollity. The songs were cannily selected, and even if their authors represented familiar choices, Big Boy's chosen number was usually a less than likely selection. Lightnin' Hopkins, Ike Turner, Fats Domino, Muddy Waters, H-Bomb Ferguson and Screamin' Jay Hawkins were amongst the excellent roster of rollin.' It was also an edifying treat to hear original songs "Leonard Cohen," "That Ain't My Name," "Pallbearer's Song" and "She Gets Naked For A Living," in their skeletal form. Also, the Bloater receives the closing 2013 award for most merchandise plugs made during a performance!

This was a hedonistic summer festival gig, transplanted indoors for the winter season. Dreadzone might best be described as a dub reggae electro-rock trippy-pop combo, and in 2013 they're celebrating two decades of determined stepping. The band's particular mixture might now sound slightly dated, too redolent of the 1990s hippy rave scene, but their crowding up of Fibbers illustrated the strength of their core following, which is now comprised of grizzled herb veterans along with a healthy infusion of younger converts. A hand count was requested by the spirited MC Spee, and there were plenty of folks prepared to admit that they were freshly-deflowered Dreadzone virgins. The outfit's roots lie in Big Audio Dynamite, whose own roots lie in the Clash. Keeping the set list current, Dreadzone featured a chunk of Escapades, their newly released album. These selections pointed out the outfit's chief weakness, a predilection for penning songs that are overly anthemic, with a tendency to become irritatingly over-familiar in a very short time. Even their best known "Little Britain" single falls into that same category, along with encore item "Captain Dread," both of them taken from Second Light (Virgin, 1995), Dreadzone's most influential album. It's the stretches where the Leo Williams bass floods up to boast its immense weight that the band are at their most compelling. In short, the deep reggae aspects rather than the cheerfully accelerated techno-banging bouts.

Usually preferring a full band scenario, 24-year-old bluesman Oli Brown experimented with a duo format for this autumn UK tour. He described this as a homecoming gig, perhaps meaning England rather than York specifically, as Brown has lately settled in Canadian parts. His playing partner was Lyle Molzän, a percussionist from that latter land. The set opened up with Brown playing solo, slinging an acoustic guitar. It was this segment that brought to our attention his ambitions within the general soft-ballad, singer-songwriter field, barely identifiable with the blues sound that garnered initial attention. This highlighted a compositional style that bordered on MOR pop, allowing the song lyrics to take an ill-advised prominence given that they're often steeped in cliché. Molzän soon came on to thump cajón, this ever popular Peruvian box placed in an unusual frontal position rather than being actually sat upon. He used combinations of brushes, a small shaker and his fist to produce some varied sounds before eventually graduating to a drum kit. Brown continued on acoustic guitar, a twilight zone before he picked up the first of his impressive electric axe array.

The stage was finally consumed by extreme rocking volume and dynamics, the pair's attire layers shed to reveal matching Bro and Zän t-shirts. It was this part of the set that probably fulfilled most audience expectations. It's not normally a wise move to languish in lazy assumptions over musical content, but in this case such a thing was justified. It grew into a very different sort of gig, fuelled by excess in terms of sonic assault, technical dexterity and generally improved taste levels. Brown seemed like a completely different performer once entering into this energized arena, appearing much more naturally attuned to the heavy bombardment of blues-rock. His covering of the bass tones transformed the set-up into that of a virtual power trio. Brown's not particularly enamored with taking extended solos, content to trim his heavy duty riffing with occasional accents and embellishments. It's as if the White Stripes or The Black Keys were descended from Bad Company and Deep Purple instead of Howlin' Wolf and Led Zeppelin. There's a thick-hewed substance to the songs that thunders through any reservations the listener might have had about Brown's songwriting abilities during the acoustic opening run. It's clear that he has an eye on the mainstream rock scene, but Brown ought not to shun the blues music which has hitherto been his forté.