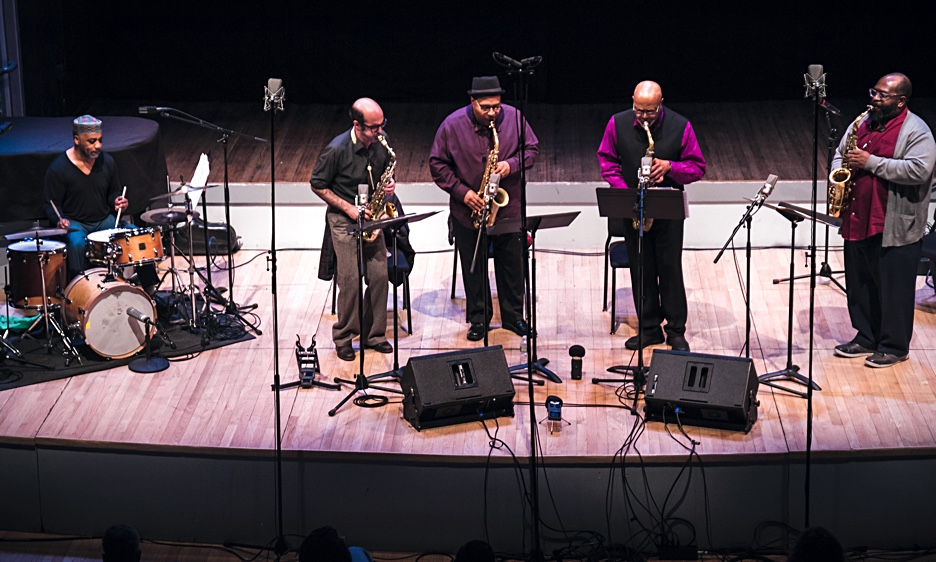 Terry Riley and his son Gyan Riley enjoy an ongoing duo performance situation, in a forum where the elder composer places the emphasis on spontaneous improvisation, impromptu sonic texturing and intimate musical dialogue. Catching him in this setting, it's easier to appreciate him as a hands-on player, as well as a grand scale arranger of concepts. It's more casual, and humorous, more directly exchanged with the audience. These Rileys seem to like using the Poisson as their chosen venue, a joint that has in recent years also presented annual variations on Terry's reputation-founding work, "In C," from way back in 1964. It was a shaper of what turned out to be minimalism.

Although not strictly operating within any specific genre, the approach of this duo tends to embrace a feeling for jazz and improvisation. It's the way in which the sprightly 83-year-old Riley, mostly on piano, but sometimes blooming into electronics, wove rhythmic spells with Gyan's rippling guitar patterns. When Riley senior blooped up the electronic matter, it had a startling effect, following his watery investigations on the acoustic piano. Sometimes, he reached into a new pool of what might be called Latin-Balkan licks. Also, Gyan's chosen amplifier sound and string-tones don't follow any wholly predictable style-trajectory, and his technique is generally not jazz, not rock, not folksy, and not classical, in nature. Whilst much of the set was calmer, there were a few sections that involved much harsher sounds than we'd normally associate with this pair, getting into effects pedal crunching and cycling electro-wrenching.

As it turned out that they'd been playing for around 90 minutes, this was a firm indicator of their continual invention of fresh tactics, as the set had seemed (without referring to time-keepers) much shorter.

Oliver Lake's Alto Madness involves four of those saxophones, steeled for spiked and shrill precision, in a new kind of quartet, variety provided by a lone drummer. Unlike Lake's old World Saxophone Quartet, which delighted in swapping around the horn ranges, as each member jumped from high down to low, here is a foursome that adheres firmly to the stringent discipline of the alto variant. Lake was joined by worthy partners in the shape of Darius Jones, Michael Attias and Bruce Williams (the latter being a recent addition to the WSQ).

This was only the third gig by Alto Madness since they formed in 2014. At first, the ringing tones were awakening, gradually stirring and spreading, with Pheeroan AkLaff rolling around skins, flash-alighting on cymbals. Lake held a grittier horn, whilst the other three saxophonists made higher and purer cries. Next up, Lake's crew delivered "Backwards" with a classic free jazz feeling, developing into a pointillist marching movement, all of their backs turned to the audience. Then Jones swivelled around to face the rows, beginning a complex slow ballet of turnings, as the hornmen went through varying states of frontal-rotation. This not only affected the visual mood, but also resulted in directional sonic changes. Ultimately, all four were pointed forward, making such a conventional orientation have the quality of transgression, now that we'd been viewing their rear aspects. The departed WSQ co-founder Julius Hemphill was the dedicatee of "Tone Poem For J.A.H.," receiving a more resonant, harmonic roundness, with Jones holding us all in a collective stranglehold during his completely solo display, squealing and plumbing for tubular throttle vibrations, honking as a refined study of this horn's full potential.

Trumpeter Amir ElSaffar's Two Rivers ensemble was augmented by the Iraqi singer Hamid Al-Saadi, presented by the Pioneer Works art encampment in far-flung Red Hook. It was so warm outside that the old factory space's roll-down metal door was kept open until just before the music started, as Brooklyn's spring had already turned hot enough for summer.

The group also featured tenor saxophone, bass, drums, and a pair of ouds, with ElSaffar expanding his palette by singing and shivering scintillatingly across the strings of his Iraqi santur (hammered dulcimer). The leader presented pieces from his "Crisis" suite, the approach having a looser, jazzier character compared with some of ElSaffar's more elaborate compositions. It was beneficial to catch him in more relaxed mode, firing off warm-blooded horn solos, periodically turning these into molten-spray eruptions. Jazz and Arabic ornamentations made fitting bedfellows. At one point, when ElSaffar quickly picked up his trumpet, the results sounded closer to Balkan jazz fusion.

Eventually, ElSaffar's old teacher Al-Saadi took to the stage, sitting magisterially, wearing four large rings on the outside two fingers of each hand, impeccably dressed in a suit, with a perched felt hat. His vocals were too loud out front, at first, but either our ears adapted, or the volume was reined in, as the rest of the set was dedicated to a subtle series of upward vocal curves and gentle dips, Al-Saadi hyper-sensitive to a song's dynamics. Was he leading or responding, or subtly smearing these roles? One of the oud players switched to violin, for a sparse introduction, momentum gathering as a further swap to a goblet drum announced a rapid quickening, with bass and saxophone tentatively joining, themes negotiated in an equal voice betwixt advanced jazz and traditional maqam.

This was your scribe's sole visit to The Loft, upstairs at the City Winery. It's a fairly recent expansion into a smaller upstairs club offshoot, but now the Winery is on the brink of shutting down and moving into a presumably swankier Pier 57 premises further uptown on the Hudson River. The Loft doesn't have the slickness of the main downstairs room, ending up with a more basic rock venue aura, more suited to the hard-pummelling blues produced by singer/guitarist Tommy Castro and his Painkillers. It was worth arriving in time for opening act Eliza Neals, from Detroit (but lately dwelling in Jersey City). She sang lustily and churned out gutsy solo floods on Kurzweil organ, ably assisted by the jagged guitaring outbursts of Frankie Maneiro.

Castro and company were also steeped in the good-rockin' powerblues, with a straightforward line-up of drums, bass, keyboards and the leader's full-on fronting. The journey was set to roll far around a blues core, though, with country rock creeping inside "Make It Back To Memphis," most of the detailing happening via guitar solos, over a pounding beat. During the quieter numbers, Castro showed off his high gospel wailing, before going walkabout around the club, eventually riding back on a fast boogie train. Further variety was maintained by the entrance of a funk number, but ultimately Castro is a brutal blues-rock man, even if before too long, he switched to walking on the soulful side. The set climaxed with "Changes" (Jimi Hendrix / Buddy Miles), a stomper with a tearaway 'Hammond' keyboard solo. This was a generous set that refused to flag...