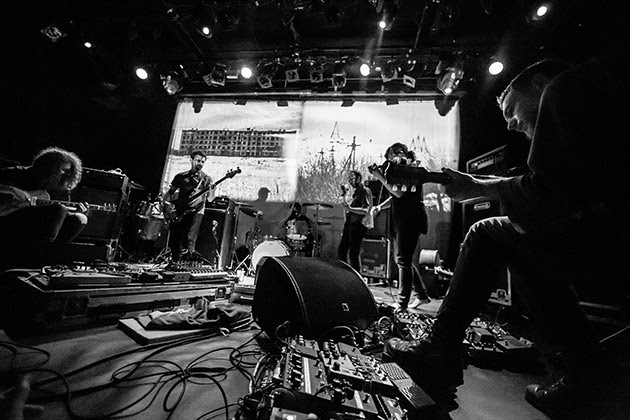 By MARTIN LONGLEY
October 20, 2015
Sign in to view read count
Godspeed You! Black Emperor
The Music Hall Of Williamsburg
September 30, 2015

On the ground level, there was a tendency to simply watch the flickering images, glimmering out from old school projectors, rattlingly housed within the mixing desk corral. As most of the players in this Montréal collective, particularly the guitarists, were seated, it was difficult to discern more than their heads. This was an engaging perspective on one level, sending the sounds off into even greater abstract realms, but ultimately it was better to clamber up to the balcony, leaning outward to view the entire spectacle from above, notably the acres of effects pedals set out around the band's feet. A cynic might be puzzled as to why such an array is needed, when the symphonic thrum of this combo is so often set on a fairly unchanging plane.

It's not as if the palette evolves radically, but more that the sensitive dynamics of expansion and contraction, ebb and flow, space and flood, are ever-changing. Even so, once we were able to view the players and their equipment, it somehow became easier to connect the music to some rooted sense of gig-ness. In other words, downstairs it was more like watching a film with a live soundtrack, whilst upstairs it became closer to an introverted psychedelic happening, the images integrated into a general field of activity. Godspeed prefer it doubled, with pairs of drums, bass (mostly one electric and one upright acoustic), plus up to four guitars at once, and only the violin left feeling relatively lonesome. The opening luxuriated in the slowest possible build from subliminal thrum to open crescendo-activity, with Godspeed playing for exactly two hours, sometimes prey to encouraging the wandering of attention, before invariably yanking back the ears with a swelling of bombastic proportions, those dynamics on an even keel.

This quartet of Mali's finest was led by singer Kassé Mady Diabaté, who was joined by Ballaké Sissoko (kora), Lansiné Kouyaté (balafon) and Badjé Tounkara (n'goni), for around 90 minutes of woven acoustic scintillation. The formal concert hall setting imposed a certain degree of studied concentration, especially compared to the last occasion that your scribe witnessed this group, around midnight, in a field (at England's WOMAD festival in July of this year). The advantage, though, lay in being seated, relaxed and focused directly on the stage, with none of those devilish festival distractions in place.

Diabaté's voice is a soaring instrument, with any audience translating difficulties bypassed due to the sheer communicative power of its sound, its syllable-shaping powers. He's a griot, which is a familial position, entrusted with being a repository of songs, history, and tales, communicating all three in a fashion similar to that of an itinerant folk troubadour. Aside from his solo works, Diabaté's best-known recordings have been with Ketama, Afrocubism and Toumani Diabaté's Symmetric Orchestra.

The three players tended to become as one during the central glide of the songs, but were all given ample space to fly off into a solo display. This was particularly startling when Kouyaté rippled off runs on his balafon, a marimba that features a vibrato-buzz as an integral part of it's gourd-rattling sound. His career so far has included stints with Salif Keita, Mory Kanté, Baaba Maal and Manu Dibango. It was Kouyaté who led the charge in providing one of the set's strongest songs, the balafon adopting a different melodic thrust, assisting Diabaté in snagging onto an uplifting vocal curve, closing out the extended performance with a peaking stretch. Generally, much of the set didn't attain this level of expression, but it was well sustained, running a measured marathon rather than a flighty sprint.

The august tenor man George Coleman returned to his accustomed roost at the Standard, accompanied, as ever, by his steady sidekicks. This is a quintet that has grown into a natural force, familiar with each other's moves, but secure in the knowledge that leaping out for excursions is facilitated by the security of seasoned experience. Coleman, perched on his high stool, appeared extra-assured during this second set of the evening, comfortably settled, primed to roll out solos of velvet warmth, embracing the audience with his fulsome sound. Fellow tenor saxophonist Eric Alexander formed the other side of the vanguard, his robust tone being more conventionally strident, almost at alto level when set beside that of his leader. The two approaches provided a tasty pairing, as each solo spree engaged with the spontaneously chosen standards.

The commanding pianist Harold Mabern enjoys spiky clusters, gracefully delivered by his wing-span mitts. Coleman emitted a beaming smile as he cocked his ear to a John Webber bass solo. When they're negotiating the themes, Alexander and Coleman weld in harmony, with a delicately swinging momentum. Coleman might be nonchalant when choosing a tune, but then he'll count the next number in almost immediately after the decision has been made, heading off on another chocolatey stream. Coleman's high keens and throaty runs were driven by Mabern's bluesy pointillism, the set closing with a gospel clap-along led by the restlessly mobile Alexander, as he made a circuit around the front tables. This set found the Coleman quintet at the peak of their powers.

Tedeschi Trucks are essentially a supreme-quality covers combo. They're also fundamentally a soul band, even though they would alarm purists of that form. It's a soul set-up, with full horn section and backing singer ranks, but the delivery of the songs includes blues-rock extremity, raga-psychedelia, avant squalling and good old fashioned sacred steel church screaming. Just like the Allman Brothers Band, guitarists Derek Trucks (a former member of that outfit) and Susan Tedeschi have established the tradition of residencies at the Beacon, this one stretching across four nights. Their ravenous fans were out in full force, conjuring a special atmosphere right from the outset. This is a communion for a cabal of enthusiasts.

Tedeschi is the lead singer, blessed with a powerfully soulful voice, keeping her guitaring mostly to a rhythm role, allowing her to give full attention to the soars and finely controlled screams of her lines. When Trucks is standing beside her, another guitar voice isn't exactly required, as he's constantly issuing complex, scorching, sliding and yowling solos, chopping back into his own rhythm squeals when not stepping forward. The combination between Trucks and Tedeschi is finely balanced, spiced up by a few showcase parts for the backing singers. The horns and keyboards (including clavinet and Hammond organ) also enlarge the vocabulary, as do the double-barrelled drumming team.

The majority of material is soul-blues, but there were also break-outs into rippling late-1960s instrumental abstraction, and much harder post-Hendrix freak-outs. This married couple are very fond of Joe Cocker's work ("The Letter," and "With A Little Help From My Friends" sounding more like his version than The Beatles original). Then there were songs from the repertoires of Eric Clapton, Leonard Cohen, Bob Dylan, Bobby Blue Bland and Julie London (with the latter's "Cry Me A River" re-configured into virtually unrecognisable up-tempo form, backing vocalist Alecia Chakour stepping forward to interpret). The ubiquitous keyboardist Jon Batiste guested on "Bound For Glory," but his efforts were overshadowed by the TTB's own keysman, Kofi Burbridge. Eventually, Tedeschi took a few guitar solos, offering a more stingingly traditional blues technique, when set beside the bottleneck howl-frenzy of Trucks. The two hour set concluded with an extended Sly Stone medley, pounding out the funk. When Trucks takes his axe to the limit, he attains a rugged transcendence, picking solo figures, alternated with heavy chord-slashes that produce a hovering drone, a distorted cousin to similar texture-planes found in buzzing African likembes, mbiras and balafons, as well as the drones of Indian classical music. Similar, but with the volume turned up to 11.