By STEPHEN LATESSA
August 21, 2005
Sign in to view read count 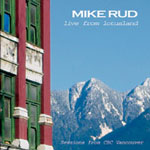 Canadian guitarist Mike Rud is a player of great touch and lyricism. Live From Lotusland features nine tracks recorded at CBC studios in Vancouver from 2002-04. The music within is highly melodic and inviting, featuring musicians who are clearly at ease with each other.

Ray Brown's great "Blues For Junior is given a magnificent reading as a duet for bass and guitar. Russ Botten's bass lopes along amiably like an elephant trudging through the heat while Rud's guitar darts over and around it like a tireless mosquito. The effect is truly charming. Botten's solo growls and purrs with laconic grace as it emerges midway through the song.

Tenor saxophonist Mike Allen contributes a lovely, breathy intro to the delicate "Suangel, a ballad for the leader's wife, before Rud takes off with his own lovely skipping statement. Drummer Dave Robbins provides gentle yet insistent interjections while pianist Tilden Webb lays down some elegant remarks and Botten hums and buzzes in the background. This performance is a model of how the intense individualism of jazz can blend into a sum that transcends its varied parts.

I'll Be Seeing You is a standard that is almost indestructible. The take here is almost impossibly rich, with Webb backing up Rud like a saloon player supporting a besotted crooner. It demands to be heard straight through at least twice.

Live From Lotusland is a strong effort with scores of lovely moments. It shows without a doubt that the hours Rud logged in Vancouver were well spent.