Base3: Live From Earth 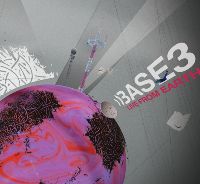 Culled from shows in the Philadelphia area, BASE3 features lead soloist and very active experimental guitarist Tim Motzer, who integrates jazz-rock, avant-rock and ambient soundscapes into his adventurous repertoire. Having collaborated on albums with German composer, touch guitarist and synthesist Markus Reuter in the recent past, here, Motzer and associates perpetuate a boundary-less trek into innumerable musical galaxies, abetted by a democratic, group-centric focus.

"GodParticle" is a prime indicator of what Live From Earth is all about. Largely improvised, the trio works through expressionistic idealizations akin to electronics-shaded jazz-rock, spun in a free-jazz mold. The band seldom ventures towards pure cacophony, mixing it up with pounding grooves offset by drummer Doug Hirlinger's flailing rim-shots and Barry Meehan's titanium-laced bass lines, with Motzer's multifarious baritone guitar work seasoned by polytonal distortion and airy panoramas.

The band toggles between loose frameworks and weighty, climactic choruses amid enticing improvisational segments and off-kilter treatments. The artists embed multiple storylines into "GodParticle," with variances in pitch and fluid passages, while upping the ante on numerous occasions. The outing marks an antithesis to the norm, where the musicians' multihued sound designs and seething dialogues spawn an abundance of persuasive schemas along the way.