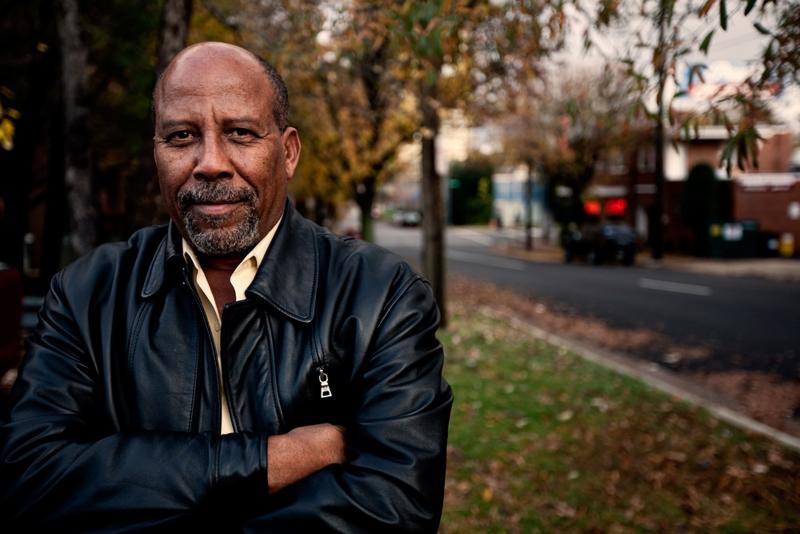 It's sometimes instructive, or even enjoyable, to catch a combo twice during their tour. Perhaps this might lead to what seems like a repeat showing, and on other occasions there is an insight into wildly varying tactics. There's always much talk from musicians about being affected by the room they're playing in, but when Glaswegian folk rockers Trembling Bells gigged in Coventry and Birmingham within three days, the respective venues prompted very different approaches.

Monday night rules were broken, as The Tin in the Coventry canal basin became unusually crowded, a mostly standing audience bowing down to the eardrum pressure of a p.a. system that was crunched up higher than the small space required. As is so often the case, our hearing receptacles soon adapted, aided by a central placement, right in the crossfire path of the band's twinned lead guitars, Michael Hastings and Alasdair C. Mitchell alternately shooting out solos, exchanging the role of ascendancy for each song.

The Bells first rang together in 2008, coming together in Glasgow, taking materials from forebears such as Fairport Convention and The Incredible String Band, but gradually upping the proggy, psychedelic extremities, forging their personalised evolution of a tradition that was itself an evolutionary step, back in the late 1960s. The new Tremblies album has been released by Tin Angel Records, which is operated out of this same venue, so the gig represented a homecoming of sorts.

Drummer Alex Neilson was last seen here as half of the Death Shanties improvising duo. As a founder of the Bells, he sings on a few numbers, but the bulk of the vocal duties are handled by Lavinia Blackwall, who also plays electric keys and occasional guitar. Her high and pure lines are delivered in such a manner that it's hard to avoid comparisons with Sandy Denny, Blackwall's training in early music also showing through. Already, two of the new songs have become focal points of the current set, with "Killing Time In London Fields" boiling with running tension, a transubstantial, progged epic that moves through different melodic phases, from ripping to floating, the organ setting turned full-on, Blackwall's vocals geared for maximum drama. Then there's the rampaging "Bells Of Burford," and as a late bonus, "I Is Someone Else," which employs a guitar-heavy middle section that's lifted from David Bowie's "The Width Of A Circle." All of these rocked out with the easy precision and assurance of a band that's already been weeks on the road. The set climaxed with Blackwall headbanging her tresses whilst attempting to destroy her keyboard, a total freak-out explosion that was followed by an a capella song, teaming her and Neilson, who'd already delivered a song or two of his own earlier in the set. Assistance for calming down, following the frenzy.

Bassist Simon Shaw wore a Can t-shirt for the Coventry gig, exchanging it for a Nico t-shirt at the Birmingham show. We wondered if he sports a different fave artist on each night of the tour. The Kitchen Garden Café had sold out all its tickets, and this smaller, seated venue provided a very different environment, to which the Bells adapted with great sensitivity. This is not to say that they stripped back to an acoustic nature: instead, they changed the dynamics, toning down the volume, but retaining the thrust, making the projection less exaggerated. Whilst the Coventry gig was ultimately superior in its extremity and power, this was an alternative perspective on the band and their material. They came on like more of a hardcore folk outfit, revealing the essence of their songs, even encoring with a different choice, "The Auld Triangle," as popularised by The Pogues.

Sandwiched in-between the two Trembling Bells gigs was Willie Watson, also a purveyor of folk music, but of a completely purist, acoustic character. This New York singer, guitarist, banjoman and occasional harmonica tooter was a founder member of the Old Crow Medicine Show, but has lately taken to stripping back his sound to the troubadour basics. He made his solo debut in 2014 with Folk Singer Volume 1, and he's promising a second shot of hardcore classics, coming soon to your virtual record store. Nearly all of the songs in Watson's present repertoire are readings of established oldies, whether they spring from country, blues, gospel or merely mainline folksiness. This Hare'n'Hounds gathering was intimately full, with every table and seat-row filled, but the room still not being overly crowded. This was a group of specialist punters who were ear-cocking their way through the 90 minute set, savouring the authentic historical reproduction of this zingy songbook.

Watson is so distilled as a performer that the experience was very much like time-warping back to the 1920s, or the 1960s version of the 1920s, or when he actually delivered an original, the 2015 incarnation of multiple decades. Some of the numbers could have stepped out of the 1950s, but whichever decade was the source, this was the naked holler'n'string-tingle of old timey days. Watson's voice is athletically mobile, highly expressive in its flight, as he whooped, twanged, cried and drawled, loading up the emotional resonance. His guitar and banjo playing were aggressively attacking, a spray of hurtle-picked notes and phrases. Rarely do we hear a banjo proponent who can flash through such involved five-string riff-showers with such accuracy and delineation. Watson kept the night entertaining with his good-natured, crowd-opening chat, his one lack being a reluctance to talk about the songs, tales behind their history, and who penned them.

The ditties flashed by in droves, often less than two minutes long. Watson included many of those featured on his album, a notable highlight being "Keep It Clean," an old Charley Jordan blues from the 1930s, and then the more familiar Lead Belly-identified trad classic "Midnight Special." Another hot one was the similarly traditional oldie "Stewball," garnering an audience singalong. Just about the only criticism to make was that Watson should have split his show into two parts, giving the audience a break. A 90 minute set of solo shorties did eventually become an onslaught of song material, without any pause for digestion.

Even if you deem yourself an Ethiopian-orientated vinyl-digger, you might not have chanced upon keyboardist Hailu Mergia's works. Last year's reissue of 1977's Tche Belew, and the previous 1985 cassette revival release on the Awesome Tapes From Africa label increased the chances, though. He was a member of the Walias Band during his 1970s heyday, but this Coventry gig was certainly not any kind of retro re-awakening of that repertoire or sound. Well, possibly the repertoire, although with Mergia's trio partners of bassist Mike Majkowski and drummer Pawel Szpura, both of them arriving from a free jazz (or free rock) background, there was a definite thrust towards a violent modernisation.

Mergia made his name in Addis Ababa, but jumped ship to Washington DC in 1981. It sounds like he spends a lot of time attending out-there jazz gigs, as this new trio flexes right at the edge of a hardened stylistic approach that's very much an updating of his Ethiopian roots, surging with an avant-fusion aggression, pulsating with angular funk grooves, ramming with a totally unexpected attention to fractured instrumental textures. The melodic heart of Ethiopian music still beats within, but Mergia is no nostalgically complacent revivalist. With the assistance of his partners, he's sitting right here in the present moment. Given his age and avuncular appearance, this came as quite a shock.

Mergia moved from electric piano to accordion, investing the tunes with varying degrees of eerie atmosphere, but also flooding out crackling bursts of freethiopian jazz, Majkowski and Szpura adding a breathtakingly tight spring-funk propulsion, keeping the time free, perpetually soloing and engaging in a running battle with their leader, to decide who was going to push the music further, faster and higher. The innate, old school Ethiopian qualities came through more strongly on the occasions when Mergia started singing. Otherwise, this was an inspired manifestation of fusion, revealing the positive powers of the form. Venue main-man Richard Guy introduced the band, personally moved aside some tables to create a dance space, and encouraged movement in the audience, but surely creating steps to match this music would have been a major challenge, and the floor remained mysteriously empty. The dancing was all in our heads!

The Destroyers have now become the ideal festival band, but the problem with that evolution is that the translation back to a 'regular' gig leaves them seeming larger than the life of a 'usual' Saturday night. Nevertheless, the upstairs room of this Kings Heath pub was so full that it must almost have been sold out, and the seething crowd was intent on recreating a micro-festival party vibration. With this local Birmingham band, all the musical (and physical) gestures have grown into an exaggerated scale, the singalongs, the crowd instructions and the highly accessible, almost-novelty vocal content. The outfit's orientation has shifted since the departure of poet Paul Murphy. This gang, which seems to enlarge every time they play, are tightly rehearsed, a fighting unit of mostly horn players (trumpets, trombone, clarinet, flute, whistles, tuba) who romp with virtuosity, aided by a punchy mix of sonic equality. They also boast guitars, accordion, electric bass and drums.

The heart is Balkan, but several of the songs wander far out into a descendant fusion zone, co-opting multiple elements, usually those that are believed to be more entertaining. Indeed they are, on the first occasion that they're witnessed. Agile fiddler Leighton Hargreaves has become the frontman, vocalising on songs which are pontificating about big brother spying activities, performing rights licenses and the band's own compact disc distributions. Some of these songs revolve around very simple vocal repetitions, and the concepts can become tired after the first hearing. There are also an abundance of visual clowning routines, but many of these, such as the whistle and fiddle juggling-with-two-bows, are also regular staples. The "Vortex Cannon" appears to be a new addition, a song replete with a prop that's biggest e-cigarette we've ever seen. They closed with their longest, purest instrumental run, illustrating that with hardcore reproducers and/or genuine Balkan practitioners being so popular on the touring circuit, it wouldn't be too much of a risk for The Destroyers to dive back in to the deeply traditional instrumental repertoire, as they often did when beginning their career-journey.