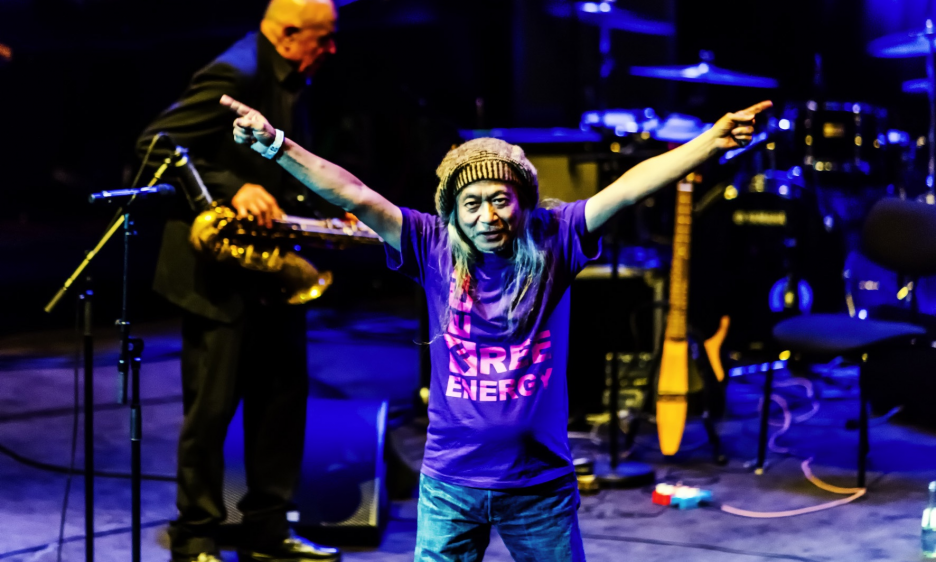 Stadtgarten is one of Germany's prime music venues, now heading into its 32nd year of existence. It's situated to the western side of Cologne, just across the train tracks, and next to several surrounding parks. The Stadtgarten building is divided between music hall and bar/restaurant, the latter being a sensible means of support for the often wild sounds (sometimes wildly uneconomical) to be heard next door. In more recent times, outside funding has bloomed, and an even more ambitious programme has become possible.

The calendar focus is primarily on jazz and improvised music, but there are frequent excursions towards rock, electronics, global roots and modern classical sounds. Artistic director Reiner Michalke has exceptionally fine taste, as already witnessed internationally during his substantial stint programming the nearby Moers Festival.

Stadtgarten's main theatre is of good size, but not too large to lose its intimacy. The room's sound system has both detailed clarity and behemoth volume-thrust, with all instruments equal, even within a fist-fightin' maelstrom of massed individualists. One big band is customarily sufficient, but on this so-far so-quiet Sunday evening, two of North Rhine-Westphalia's enlarged ensembles were about to inhabit the stage, sometimes even at the same time.

The Cologne Contemporary Jazz Orchestra tends to create music that stands well inside the tradition, mostly in the manner of Gil Evans, Mike Gibbs, Maria Schneider and other painters of cinematic jazz narratives: lyrical, studied, bright and sleek. Wayne Shorter's "Infant Eyes" slid by at a slow tempo, Frank Sackenheim soloing on tenor saxophone, swelling and gliding. Presumably, the following "Ritual" is penned by pianist Jürgen Friedrich, who opened the piece by triggering a swirling section from the innards of his instrument. The free billowing eventually entertained thoughts of a rhythm, developing a purposeful tread. The CCJO delivered a polished set, but the following extravaganza by The Dorf was destined to surge out into the dangerously diced-up realms of jazz beyond even our ken.

The Dorf came together in 2006, around the Ruhr area, founded by saxophonist Jan Klare. Even when lacking German lingo translation skills, it's possible to glean that his between-number patter was highly amusing. The music itself also possesses absurdist moments, but is mainly devoted to savage sonic eviscerations, enacted with brutal precision, even without the aid of exact scoring. Klare's own spirited directions are usually enough to coax out a tightened razor reaction-time amongst the substantial spread of players.

High contrasts were at play, with vocals, electronics and sousaphone on the battlefield of audibility, but with the muscular sound system, heard at just the right levels within a compacted, almost industrial barrage of mixed textures. The extreme crackle, fizz and pustulous bursting of the four electronicysts infested the complexion with rupturing spatial displacement. Astoundingly, this action enhanced the other 'conventional' instrumental structures, not obscuring, but overlaying with a coating of bursting, sizzling, synthezoid fry-up. The massed horns ebbed and flowed in waves, acting as an entity, with soloing possible at any time, by anyone.

Klare remained on top, in command (credited for 'air movement'), riding this bucking bronco of revolutionary fracturing. It's a commendation indeed, when an ensemble can still create music that's surprising, in these days where we always assume that all combinations have now been heard already. All was circling, coalescing, the double drums shown off, alto saxophone and electronics joining in for some skeletal dub reggae. As the set intensified even further, the encores kept coming, and members of the CCJO took to the stage, converting to the laws of mayhem, which relaxed for a stately swaying, glowing with dignified sound-colours, getting more crowded, and slowly more violent, and ultimately, as close to anthemic as we could withstand.

Jaki Liebezeit is amongst the very finest of rock drummers, although his work with Cologne combo Can, where his reputation was made, often embraced strong aspects of satellite modes, particularly his extended funk and African patterns. Liebezeit died on January 22nd, 2017, aged 78, leaving behind not only a wondrous legacy of recording and performing work, but also a vast cross-genre influence on artists from multiple musical realms and generations. His best work was with Can, between 1968 and 1979, but Liebezeit also made excellent records with Phantomband, Drums Off Chaos and the English bassist Jah Wobble, amongst illustrious others.

This tribute concert (produced by the Stadtgarten venue) was held exactly a year after Liebezeit's demise, inviting many key collaborators, including most of the surviving Can members: Irmin Schmidt (keyboards), Rosko Gee (bass) and Damo Suzuki (ritual vocals). The massive Kölner Philharmonie was sold out, and it was invigorating to cram out such a hallowed hall with a deeply alternative rock/jazz/electronic gig of this nature.

Drums Off Chaos is the all-percussion unit started by Liebezeit, so its three other sticksmen continued the drive towards rhythmic nirvana, opening the evening's proceedings. Reiner Linke, Maf Retter and Manos Tsangaris initiated a pulsing, circuitous groove-set, invoking the repetitive, organic momentum so favoured by Liebezeit. Some observers have used the word 'robotic' when describing his style, but there were always minute variations and accents, never a strict order of repeat. A rebellious robot, perhaps.

This trio would return at several points during the two sets, also acting as part of the cumulative house band. Rosko Gee soon became the backbone of the night's first half, continuing the bass role he played on Can's often underrated late-1970s albums (classics that were Saw Delight and the eponymously titled Can). Jochen Irmler also joined on keyboards. He was a key member of Faust, another great band from the same era as Can. The other current Faust faction are much more active as a band, so this was a rare opportunity to catch Irmler in the flesh.

Early in his career, Liebezeit played with trumpeter Manfred Schoof's quintet, during the mid-1960s. Next, Schoof (playing flugelhorn) and old Globe Unity Orchestra colleague Gerd Dudek (tenor saxophone) delivered a set in a much more relaxed mode, when compared to the free jazz they were playing during Liebezeit's involvement.

The most exciting segment arrived when bassman Jah Wobble hit the stage, already magnetising via sheer force of personality, before he even played. The vinyl-manipulating experimenter Philip Jeck didn't quite make it to the gig, so Wobble played in duo with drummer Marc Layton-Bennett. He gave a brief interview, eloquent and direct, then spontaneously decided to open with a drum solo (then duo), before switching to his accustomed electric four-stringer. The most tingling moment of the entire tribute was when Wobble raised his arms towards the celestial reaches, giving profound gratitude to Liebezeit's continuing essence.

Can's remaining main man, Irmin Schmidt, moved his position in the running order, to open the second half with a solo piano performance. As the evening had already slid through several moods, all the guests manifesting different aspects of Can-and-Liebezeit sympathy, Schmidt chose to begin sensitively, therefore justifying his introductory placement. His piece was introverted, sombre and free-flowing, establishing a thoughtful mood, with prepared interior spaciousness, building towards repeat patterns It was frustrating to a certain extent, that he wasn't tempted into joining a group improvisation, with Suzuki, Gee and Drums Off Chaos, for instance.

In complete contrast, the English duo of Jono Podmore and Ian Tregoning launched off into another zone completely, offering a pulsating electronics rumble that harked back to the 1980s and '90s, with a combination of industrial rupture and ambient slow-techno. Podmore (known as regular Schmidt collaborator Kumo) favoured ample warps from the theremin, whilst Tregoning attended to his keyboard/mixer/laptop array. They contributed one of the night's most arresting stretches.

As the show developed, it soon became clear that none of the groups would be attempting any Can numbers (at least not recognisably so), and that the night's flight path would be determined via heavy improvisation and intuitive rolling. The very tactics usually employed by Can themselves.

Unfortunately, there were a pair of lesser performances, the second one unworthily situated right at the potentially climactic point, and incongruously pitched at a bland Europop level. Robert Coyne (son of Kevin) operates at the other end of the spectrum from his departed father, categorisable as a mainline, dreary, whining singer-songwriter type, without much of a distinctive style. The veteran Italian pop singer Gianna Nannini made a visitation from some other universe, her songs and stage-craft sounding like they'd remained undeveloped from around four or five decades back. Even though Liebezeit had played in her band, the actual inclusion of this act was jarring, in a bad fashion. Certain elements of the audience appeared enthusiastic, though, so perhaps her cultural resonance assisted this reaction. Who knows?

Just before Nannini glitzed onto the stage, the old Can vocalist Damo Suzuki had delivered another one of the night's most exciting mini-sets, invoking wild spirits via his uninhibited, skewed stance and guttural, rasping Noh Fun throat-ravaging. It was quite a task to transcend the concert hall situation, but Suzuki gripped tight with his bandmates (including another major Krautrock figure, guitarist Michael Rother, of Neu!), producing a concentrated burst of groove-psychedelia, Dudek returning at the piece's peak, to deliver a searing, soulful tenor solo.