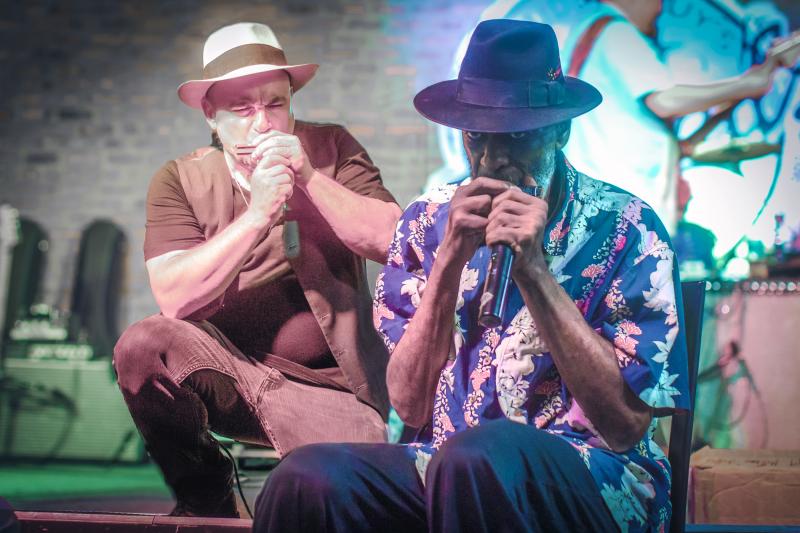 Perhaps the B.B. King Blues Club in NYC was modelled on Buddy Guy's Chicago joint, which opened way back in 1989. It certainly has a similar feel and concept, although Buddy's is more intimate than B.B.'s and noticeably more devoted to blues, rarely straying from the core. The New Orleans-style menu is another similarity, as is the first-come, first-served tabling policy.

Matthew Skoller sings and plays harmonica, enjoying a residency at the club, and playing there right from the start of his career, which is knockin' on three decades now. His albums have been released by Alligator, Delmark and Blind Pig, amongst other labels. Skoller's quartet features the standard guitar, bass and drums line-up, playing two sets on the eve of Labor Day, the first hitting the 90 min mark,and the second more concise, at around 45.

Skoller rocks at the edge of the swamp, harp amp fired high for maximum distortion. He sometimes removes that microphone, singing through an unsullied channel, but for Slim Harpo's "Baby, Scratch My Back," he's fully immersed in the gritty treacle, guitarist Tom Holland pulling out his prime chicken-scrabbling licks. The sway continued, with six-string bass pumping out the undertow. The 76-year-old singer and guitarist Eddie C. Campbell was sitting down at the stage-front, so Skoller invited him to join in on "Last Night I Lost The Best Friend I Ever Had," the old Little Walter song. Campbell suffered a stroke in 2013, and remains quite fragile, but he pushed his chair to the lip of the stage, whipped out a harmonica, and proceeded to mesmerise the crowd with a sterling rendition, including a harp duet with Skoller. Campbell might still be in recovery, but his voice remains a powerful conduit for emotion. Southpaw guitarist Holland revealed a wide range of approaches, often sounding like Robert Ward, with his twangy vibrato surf-drench. Skoller's harp was particularly unwashed during "Messin' With The Kid," his chief aim being to get this pre-Labor Day crowd dancing, shifting emphasis to the shuffling, funkifried side of his songbook. Skoller and Holland played harmonised twin-lines, like metal axemen in full flight, the latter performing a distinctive descending-leg-stomp move at regular intervals. They closed with a country hoe-down blooze, confusing us all even further with their fast-switching styles.

Dengue Fever are regular Empty Bottle visitors, once again making the jaunt from Los Angeles to proffer their distinctive amalgam of Cambodian pop and transcendent psychedelia. These two elements marry unnaturally well, with a dash of cheesed 1960s Farfisa organ forming a bridge. At first, the long, narrow venue was filled almost to capacity, but whether some folks had arrived for the opening acts, or whether it was early to bed at the end of the Labor weekend holiday, who can say? Around halfway through the set we were left with the hardcore followers, who appeared noticeably attached to their fave combo. There is good reason for this, as the set rocketed through with a momentum that embraced parallel aspects, united naturally over the last decade's togetherness. Lead singer Chhom Nimol, a Cambodian transplanted to California, provides humorous communication with the crowd, her voice possessing drama, emotion, sincerity and kitsch factors, all simultaneously.

The songbook is a mixture of 1960s Cambodian covers and band originals, a handful of these sung in English rather than Khmer. The taller males of the band have arrived from a punkier, rockier enclave, bassist David Ralicke pogoing as he thrums, lead guitarist Zac Holtzman, making a run of infectious riffs, or copious acid solos, leavened with surf twang. His most impressive axe is a two-necked beast that successfully grafts on what may or may not be some kind of chapei dong veng hybrid. Whichever way, the end result is a dazzling concussion between unlikely stylistic elements. A pho soup sound this could be, but each ingredient tasted uncompromisingly natural.

Space is the place in Evanston, a north Chicago suburb. It just looks like a slick restaurant from the front, and indeed it is, but a side corridor leads to the back of the building, where we find an equally well designed music venue. There's a club vibe, but more informal, and with an intimate set of tables, meaning that a relatively small crowd can make the joint look well populated.

The youthfully energised Christian Scott aTunde Adjuah, from down in New Orleans, matches his virtuoso trumpet acrobatics with a gift for verbose audience communication. It's a testament to his storytelling skills that he still rivets the attention, even if we've heard some of these tales before. This is a band that reverberates with a rapport that's growing out of strong road-friendships. They look like they adore gigging together, enough to feel relaxed about making running-joke jibes with each other. They're at the peak of their prowess, unless of course, they subsequently find themselves able to take it even higher.

Scott's range of customised horns is expanding, with a new creature that looks like it might be a bass trumpet, although it doesn't sound markedly low-toned. Even so, it has an impressive amount of curving tubes. He favours the reared-up bell sported by Dizzy Gillespie, and Scott's tone and delivery is capable of fighting in that same arena of heavy jazz competition. This band is one of the few to mess with fusion and make the results sound like a personalised musical form, selecting carefully from African and Latin sounds, ears also cocked to hip-hop and modern soul.

Freshly signed to the Ropeadope label, Scott was doing the expected, and unveiling compositions from the forthcoming Stretch Music album. Close to the set's beginning, flautist Elena Pinderhughes and altoman Braxton Cook delivered a pair of equally cutting solos, and as "Sunrise In Beijing" unfolded, Scott was blasting out with a compacted detailing. Drummer Corey Fonville integrated his electro-pads, combining sounds in patterns that most others wouldn't expect. Scott embarked on his accustomed band introductions, some of the longest in recorded history, but he managed to keep his rambling descriptions interesting for the duration. The monster, curlicued horn came out for "Perspectives," which turned out to be one of the most elaborately gripping numbers of the night.