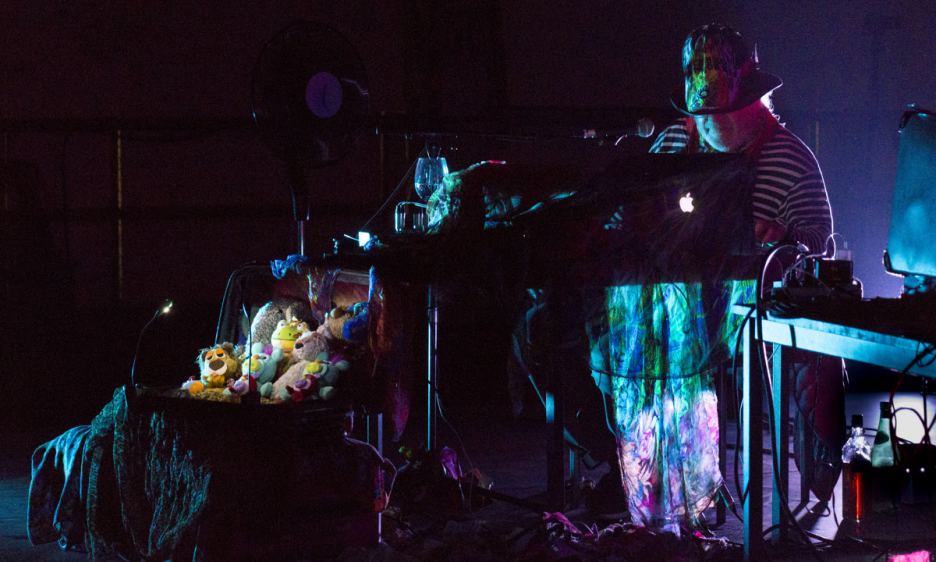 Situated close to the Grand Place, Ancienne Belgique is a key Brussels venue, with an adventurous approach to programming. Its main stage boasts a precisely-delivering sound system, where clarity becomes power, and all instruments are equal. There's a new old movement in Turkish psychedelia, partly digging up its golden era of the late-1960s and 1970s, but also continuing with newer artists and hybrid, modernised song-forms. Several of the venue's stage-spaces were utilised during this entire evening of Turkish psychedelic music, beginning upstairs in the AB Salon with a 6pm presentation by Daniel Spicer, a writer for Jazzwise and The Wire. He's recently had published The Turkish Psychedelic Explosion: Anadolu Psych 1965-1980, dedicated to the music's heyday, and then entering into a poppier late-1970s manifestation.

Spicer's talk was interspersed with music cuts and visual footage, enlightening the curious audience by revealing perhaps unfamiliar artists, and peppering his informative narrative with humorous asides. Not all of this music is hardcore psychedelia: as with British and American genre examples, some songs veer towards pop or straight rock, with acid-dropping reduced to a light drip. It's the same with the two bands presented later on the main stage, as the music bore hallmarks of those earlier decades, but revolved around a milder rock-pop sound, with liberal touches of folkloric influence. Even though not flooded with fuzz guitar outbursts, or shimmering mists of flute or sitar (or even saz), the evening's artists still managed to look backwards and forwards at the same time.

Singer Derya Yildirim opened the night, with Grup Şimşek, whose line-up featured drums, bass, retro-organ keyboards and lead guitar. Yildirim herself concentrated on the lead soloing three-stringed electric saz, frequently setting up a dialogue with the 'conventional' guitar. Whilst being rock and pop influenced, this crew's songbook has an overriding folkloric feel, with a recurring singalong feel, like a Turkish-styled variant on the Fairport Convention relationship with roots.

Headlining on the main stage, another singer, Selda Bağcan, drew in an audience that seemed very familiar with her decades-long repertoire, presumably a crowd of Turkish or Turkish-descended hardcore fans, as they sang along with many of the song-words. A veteran 70-year-old star, with a reputation as a protest singer, Bağcan actually looked more like a cuddlesome grandmother figure rather than a psychedelic rebel. Despite any gentle visual aspect, her voice remains a powerful conduit for emotive crowd-prompting, this gig possessing an unusually communal vibration. So communal, in fact, that real security problems grew, as several audience members displayed a persistent desire to clamber up on stage and hug her, or just as often, pose for social media documentation. The security staff tried to be relaxed, but such stage incursions clearly had to be stopped.

The Boom Pam line-up (they are Israeli rather than Turkish) features electric lead saz, guitar, keyboards, bass, tuba and drums, once again highlighting a bouncy, folkloric swaying motion, well-suited to near-constant crowd clap-alongs. The atmosphere was charged. Sometimes, Selda would simply let the audience finish a verse, or even handle an entire chorus. Cellphones were brandished with plague-force.

To end the night, upstairs in the smaller AB Club, the fast-rising Turkish singer Gaye Su Akyol seemed to just about cram in most of the crowd from downstairs, stage visibility being made problematic. As the gig progressed, your scribe broke through the numbers, gaining a fuller view, shocked to see that, under Akyol's diaphanously spangled cape she was clad in black hot pants and thigh-high black leather stiletto boots. This matched well with her and her (masked) band's surprisingly surf-goth-garage-rock attack, coming on way more aggressively than the contents of Akyol's recent album (Hologram Empire) on the mighty Glitterbeat label, which promised songs that were much more reclined in mood. Akyol's deeply resonant voice rose powerfully above the twanging guitar riffs and sweeping organ sounds, numbers alternating between atmospheric and rocking. Ultimately, this was a very substantial evening of Turkish folk-rock in several of its possible guises.

The pianist, keyboardist, composer, improviser, vocaliser and stuffed creature collector Charlemagne Palestine was born in Brooklyn, but has been living in Brussels for the last two decades. Time for an expansive exhibition at BOZAR, the city's impressive arts complex, which includes a concert hall, several smaller venues, two restaurants and multiple visual display spaces. In keeping with his eccentric mien, Palestine's installation was called Aa Sschmmettrroossppecctivve, and his complementary performance was deemed to be Newwwsswirlll. This last event was held in the slowly-opening Kanal encampment, a division of Centre Pompidou in Paris. It was part of the Kunstenfestivaldesarts, and involved a duo with Nico Vascellari, artist and vocalist.

Even Google has trouble finding Kanal, but eventually it turned out to be a massively sprawling, retired Citroën showroom. Circling its exterior, eventually an entrance was found, and then, once inside its vastness, the visitor had to walk some distance up a series of low-gradient ramps, eventually discovering the high corner where the show was unfolding. Apparently the performance was barely 35 minutes in duration, so your scribe managed to miss most of it, but heard the sounds on the upward way. The tack was heavily minimalist, but in a rippling progression of textures, building up an ambient mass. It didn't sound massively substantial, or unusual in its approach, but it did manage to pervade the entire building in suitably subliminal fashion, as Palestine made his toy bears talk, filtered into alien guise via heavy microphone effects, an alternative Eastern robo-choral sound infiltrating a secular church of the automobile.

Meanwhile, at Palestine's BOZAR exhibition, time moves more slowly. It colonises several rooms, nooks and a staircase, where its creator has covered virtually every available surface with his variegated stuffed creature accumulations. All beasts are represented. Even some imaginary beasts. Palestine's own music lurks in the background, infiltrating the environment. There are a few old television sets, a smattering of old videos from the old days. Palestine's piano is infested with soft playthings, drooping inside, and hanging from its lid. There are larger beings, looking benign until our eyes catch their faces, as they stare into an array of large mirrors. Certain sinister expressions exist on creature visages, just at the point where they meet their own reflections. There might be an overall kitsch-value in the colours, the fur, the ears, the general profusion, but the artist makes sure that there are glimmers of evil in our peripheral vision, just like in children's tales, just like in fairy tales. We have a majority smile, smudged by the occasional twinge of dark fear.

Perhaps the thunderous organ of Anna Von Hausswolff can provide some continuity from Palestine's insistent patterns. This Swedish singer and keyboardist may well record albums on church organs, but the sound back up in the medium-sized AB Club was enough to pummel even the ears of those who lap up sonic extremes. To lean against the venue walls meant to physically vibrate in sympathy, as bass tones rumbled the structure, tickling the buttocks and churning the rib-contents. Perhaps it was just a touch too loud: if the band wear earplugs, the sound engineer wears earplugs, and much of the audience wear earplugs, what's the point? The buttock tickling, of course!

Even though she's been on the scene for a decade, the recent Dead Magic album has significantly upped Hausswolff's profile, not least with its absolute classic song, "The Mysterious Vanishing Of Electra," which was unsurprisingly one of the heights of this intense set. Towards the conclusion of the show, she'd emerged from her keyboards, concentrating on singing, declamatory, booming, authoritative and frightening, as the rest of the band provided ample guitar-krruunging emphasis for these often lumbering dirges. It's expected, but she can't escape pointed links to Diamanda Galás and Nick Cave, such is the doomy drama of Hausswolff's interior world, disgorged onto the public stage.