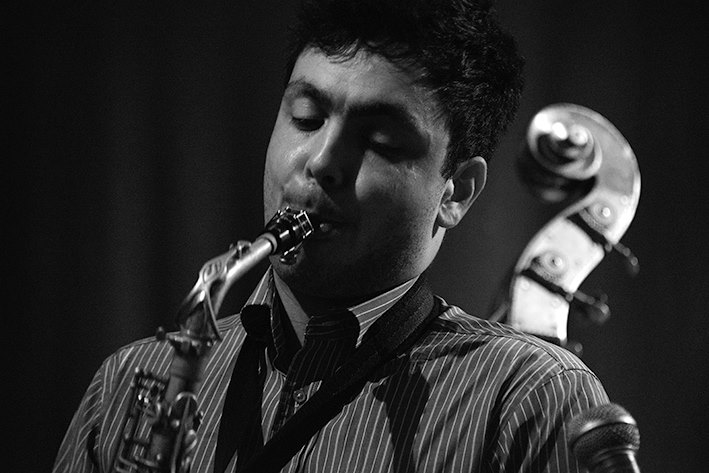 Some of Tom Harrison's band sidemen are more familiar to seasoned UK jazz fans than the leader himself, but the London saxophonist's film music project will doubtless contribute to improving his own profile. It's the kind of conceptual set-up that is likely to appeal to promoters looking for a unique direction, and will be particularly appealing for festival programmers. The Birmingham Jazz team made one of their occasional forays to a different pub, moving from The Red Lion in the Jewellery Quarter to The Bartons Arms, which is a few steps away from The Drum arts centre in Aston. This is one of the most impressive quafferies in Birmingham, both architecturally, and in terms of its beery contents, courtesy of Oakham Ales. The gig was staged in the upstairs room that has long hosted jazz gigs, stretching back three decades to drummer Tony Levin's fondly-remembered guest-inviting sessions. The space is ideal, but one small gripe is that the heavy reservation of all the room's large round tables had the effect of creating an atmosphere of established exclusivity, as a first impression given to the newcomer.

The original idea was to allow more stage-space for Robert Mitchell's piano, but in the end he decided to bring along his electric keyboard. Mitchell is a renowned bandleader himself, not averse to conceptual compositions. Completing the quartet were bassist Ryan Trebilcock and drummer Dave Lyttle, the latter coming across from Ireland. The bass position was originally advertised as being taken by the American-in-London Michael Janisch, who was later replaced by Larry Bartley, with Trebilcock making the ultimate fleshly appearance. This was no massive disappointment, as he's one of the finest bassists on the scene, and a regular visitor to Birmingham.

Harrison adopted a very personalised approach to selecting the movie themes used as his inspiration and impetus. The first piece was of suite-length, stretching to around 30 minutes, "Scrambled Egos" responding to the Stateside chemistry teacher/crack-dealer black comedy series Breaking Bad. Except that Harrison's work didn't particularly evoke the mood of that show, sounding light rather than dark, mellow as opposed to tense. Nevertheless, that didn't prevent Harrison's themes from being engaging. Percussionist Lyttle immediately gripped the attention, his resourceful techniques adding a sense of unpredictability, as he made sharp cymbal-scrapes, rim-rattles and suddenly dropped the sticks to play with his hands. Next up was a response to John Carpenter's Halloween, which avoided calling to mind the original music, but once again provided something else of satisfying substance. The first set's best playing, in terms of ensemble thematic development and individual soloing was "The Shadow Of Your Smile," taken from The Sandpiper, a 1965 flick which featured Richard Burton and Elizabeth Taylor, with the song popularised by Tony Bennett. The condensed melodic substance acted in sharp contrast to the leisurely unwinding of the previous pieces, making a strategically strong move towards convention which was actually quite arresting. Again, Lyttle was making fast hand-flashes, this time across the hi-hat, and Harrison delivered his most striking alto solo of the set, providing a suitable climax. The second set had another surprise in store, with a funked-up strut through Star Wars. These are not the themes that we'd normally expect from a film music project, particularly not nestled together. The Sandpiper meets Star Wars? Where else could we savour such a choice pairing?

This was not a typical band booking for a traditional jazz club. Northampton trombonist Tad Newton has a wide-ranging repertoire, not much of which is old school New Orleans jazz. His territory is more within a swing realm, but twisting and turning into the Blue Note catalogue of the 1950s and '60s. Nevertheless, such old stylistic divisions ought to be naturally swallowed by now, more than 70 years down the line from when the paths diverged. In essence, the Jazz Friends selected a collection of tunes that still aren't heard together so often during a single gig. Newton formed this band just over three decades ago, and it looks like his Danish bassist Tomas Pedersen is the longest-serving member, having notched up close to 20 years on the road with this combo. For the Solihull gig, trumpet and flügelhorner Lester Brown was guesting, accounting well for himself within the regular ranks. This was the club's last gig before the summer break, and also marked the retirement of its chief organisers, so everyone was set on reaching a peak, and succeeding admirably with this lively sextet.

The first set kicked off with "Satin Doll," then "(Back Home Again In) Indiana," but there was a sideways jump with Newton's homage to Horace Silver, choosing his "Song For My Father," which completely transported the combo into a Latin soul jazz dimension. Drummer Ronnie Fenn was particularly adept at driving these stylistic changes, switching from swing momentum to a bouncier motion, full of rapid fills. The pneumatic rhythm team buoyed up Brown's airy flügel soloing, then there was a soprano saxophone showcase during "You Go To My Head," with reedsman Trevor Whiting choosing from an armoury that also included alto and clarinet. The leader took a vocal on the spirited "Jeepers Creepers," then breezed through a muted trombone solo, swiftly followed by Brown's trumpet, also muted. Fenn utilised some more sharply hissing hi-hat fills during "Watermelon Man," topped by a fluid alto solo from Whiting. The band stripped down to a trio for "Lady Be Good," highlighting Alan Haughton's jokey pub piano impersonation, then with "Jive At Five" and "Lester Leaps In," they were firmly back in swinging mode, for a spirited close to the afternoon session.

The recent death of pianist Horace Silver had a predictable effect on JALCO's Blue Note Records 75th anniversary celebration programme. Their set opened with a pair of pieces penned by this towering figure of hard boppin' Afro-Latin soul-jazz. The essential "Señor Blues" made way for the less obvious "Peace," these numbers followed by Joe Henderson's "Inner Urge" and Wayne Shorter's "Infant Eyes." This latter downplayed the usual heavy featuring of soloists, choosing instead an ensemble sound that savoured suspended textures of aural finery. Silver returned with "Cape Verde Blues," with this bias towards the pianist facilitating a stronger Caribbean content than would usually be presented by JALCO. It was Afro-Latin syncopations all the way, studded with a diamond-sharp trumpet solo from Marcus Printup. This orchestra always excels, but there was a sense of heavily marshalled self-control in their delivery, with hints of fire only beginning to fleck around the edges when they broke into "Skippy," this Thelonious Monk tune arranged by Ted Nash. Music director Wynton Marsalis himself played a dynamic trumpet solo, chased by a strong trombone run from Elliot Mason. The second half neared its climax with an elaborately spiky rendition of "Un Poco Loco," that Bud Powell classic. Vincent Gardner dragged slowed-down trombone phrases over the racing beat, at odds with the fleet time of the tune, deliberately setting up a pulling tension. Nash leapt in, seizing his chance for a fluid alto ripple. These were the occasional outbreaks of a more spontaneous, lusty-driving creativity, but the majority of the gig was more self-consciously crafted, slick and poised, but lacking the original sound of discovery that would often pervade those old Blue Note recordings. The evening concluded with an encore that involved most of the players leaving the stage, with Marsalis remaining, along with the core rhythm trio. This offered an opportunity to hear his horn, loosened by having enough space to breathe, unfettered by dense arrangements. This is where his phrasing agility was given a showcase, soon to be joined by saxophonist Walter Blanding, for a relaxed tussle. It was a striking way to close the evening. Perhaps the rest of the orchestra expected to be called out for a further encore, but as it happened, this quintet segment turned out to be the finale.

Except that later the same evening, at The Spotted Dog's regular Tuesday jam session, who should stroll into this hidden Irish pub than Marsalis and Blanding, clearly seeking some late night sparring action. It was a strange sight indeed to observe these starry Americans in a small pub environment. For the handful of folks who attended both gigs, this was an ideal way to experience Marsalis in a hugely contrasting mode, from concert hall to after-hours joint. He and Blanding each played their own spots, then united for a solo-trading spate with trumpeter Reuben Fowler, a London visitor at the Dog. Blanding had just brought along his curved soprano, and proceeded to flabbergast the gathering with his serpentine circular-breathing epics. Marsalis kept things spliced and diced, scattering rapid buckshot particles with accurate aim. Ultimately, the listener had to conclude that jazz is most at home in the close quarters of a club or a pub, where reactions are instant, a lightning social and sonic etiquette of organised chaos, on the hoof, and completely of the moment.

The uprising of innovatively charged UK bands has become so established that we're now experiencing the dawn of the 'supergroup,' even if the players involved are only familiar to followers of this particular scene. So, the Monocled Man trio brings together members of Fringe Magnetic, Troyka and the Kairos 4tet, meaning trumpeter Rory Simmons, guitarist Chris Montague and drummer Jon Scott. All three deploy various types of electronic augmentation. The precise combination of these artists creates a music that's not so similar to that of their usual host combos, but it will still appeal to most of their existing followers. The bad news was that the audience at The Hare & Hounds was extremely sparse, but the good news was that the performance was unaffected, the tunes delivered with a committed energy and precision. The venue's upper room is also blessed with an excellent sound system, mixed with crystal attack, so the Monocled ones were comfortably angular in their ideal habitat. Lacking a bassist, the onus was on Montague to inhabit the lower regions, coating his strings with effects that often made him sound like an organist's footpedals, padding around mysteriously. Simmons mostly found himself as the vanguard instrument, high-wiring above the involved contortions of guitar and drums.

The internal lockings were ever-metamorphosing, but every unstable combination always connected with razor-skimming accuracy. Keyboard-impersonating textures were frequently injected to thicken the atmosphere, sometimes as drones, at others providing more of an active melody. Simmons moved between trumpet and flügelhorn, revealing different levels of friction around the edges of his solos, individual expressions that could also be classified as ongoing melodic structures, though filled with constant detail and embellishment. One number found him building a line on his small keyboard, leaving Montague free to rip out a more abstract guitar solo. The one lack might be that the guitarist's riff-and-bass line-building duties prevented him from using his own voice as a soloing balance. Meanwhile, Scott's drumming was always in motion, balancing the needs of structure with the urge to make constant asymmetrical accents. Meeting in Leeds and London, the threesome have gigged together frequently, though not in this particular configuration. They already have a debut album available on the increasingly prolific Whirlwind label, operated by the US bassist Michael Janisch, now a long-term London resident.