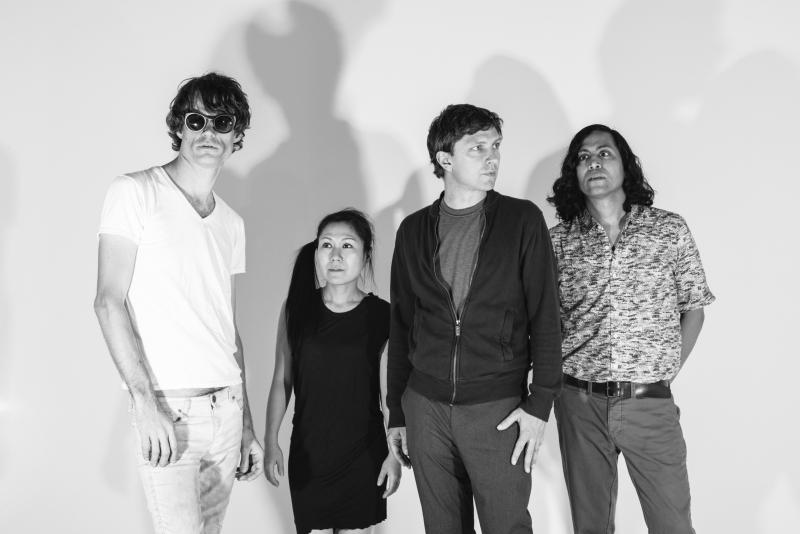 The Tubes are touring to celebrate four decades of existence. Always something of a cultish alternative, and quite possibly bringing the punters out in droves due to a certain nostalgic curiosity, this Bilston show was the last night of their UK leg, and the atmosphere was suitably charged. Hailing from San Francisco, this bunch of japers have always been concerned with the satiric poke, probably closest in killing methods to those of that oft-sleazy documentarian of those heady times, Frank Zappa. Musically, they'd have an uphill struggle matching FZ, but The Tubes are still a band of slick, accurately targeting players, mostly deploying pomp rock motifs, but also hefting in genre tics from the post-Sinatra universe, the prog grandiloquence era and the glam punk struttiness of the New York Dolls. It's these other frills that offer the thrills, when The Tubes get into their heartily-mocking pastiche. Even if the music sometimes sounds quite straight and sincere, singer and genial host Fee Waybill will debunk the proceedings via one of his multitude of costume changes.

Speaking of Waybill, it must also be mentioned that this is that rare beast: a tour, decades on, that features virtually all of the original band members, totally communing and surely tighter than ever, as the dates reached their end. Guitarist Roger Steen frequently jolted numbers up by slashing in with a serrated solo, these being impervious to self-mockery. Drummer Prairie Prince stoked with rumbling thunder, rolling around a massive kit that also found space for timbales and bongos, for those Latin outbreaks. Rick Anderson was also there with the propulsive basslines, the line-up completed by strident keyboardist David Medd, a comparatively recent recruit.

It's not clear whether we'd gain massive satisfaction from lolling around in our boudoirs, airing this set on our domestic sound systems, but in the heat of the fray, The Tubes delivered a stage-show that was consistently gripping, entertaining and surprising. Waybill littered his spiel with the fuck- word, but this was a cover for his informed wit and persistent observations on society's shortcomings. His overall stance was often superior to the actual content of the songs, even if we weren't completely caught up in the poodle rawk noodlings of some pieces. Waybill sashayed onstage in a variety of guises, clad in prison garb, television host leisurewear, buttock-revealing bondage leathers and coolster swing vocalist suit. His vocal stylings were suitably authoritative, richly resonant. Waybill saved the best until last, as alter-ego glam punk giant Quay Lewd tottered on in high heels that must have been two feet thick, his hands on Steen's shoulders as he inched towards the microphone. Of course, it was the evening's high-point song, the truly anthemic "White Punks On Dope," still sounding monumental, as a powerful mixture of itself and its own absurdity-core. Was he pleased to see us? That's an affirmative, judging by what lurked down below in his silver spray-ons. Oh, but then Lewd whipped out a bottle of water from his crotch-pouch, bringing a small dose of reality to the fore...

Over the years, the Youngblood Brass Band have been regulars in Birmingham, not least because of the supportive scene at this Kings Heath venue, the upstairs room easily filled on a Wednesday night. There are a bewildering profusion of American brass outfits, laying down a more stationary version of the marching band concept. The Youngbloods are the ones that aren't from New Orleans, and the ones that implant the highest levels of hip hop. They hail from Oregon, Wisconsin, officially assembling in 1998, but with roots stretching back two decades, even if they do still exude a youthful energy.

The entire gig was a 90 minute assault of brass blasting, intelligently sculpted, formed out of multiple influences, from disco to free jazz, and funk to rap. They have the bouncing feel of New Orleans parade music, but snare drum percussionist David Henzie-Skogen (one of three battlin' sticksmen) leapt forward frequently to deliver acidic gushes of rappin' couplets, like a one- man Beastie Boy. He and the band have managed to trim a lot of the festival- styled 'encouragements' from their performance and The Henz has a pleasingly abrasive form of audience address, sharply taking the piss out of us, and indeed himself.

The doubled trumpets, trombones and saxophones are all well capable of launching into inspired solos, and frequently do so, but some of the most nimble playing comes from surprisingly low quarters, with co-founding sousaphonist Nat McIntosh back in the ranks (he departed for a spell), contributing vocal multiphonics to the spread, and sputtering with a dainty finesse. Then, he'd switch around to the upended fartography that we all might expect as the norm. Another striking shift was made with a brief bass clarinet and trumpet abstraction, before the bold bounding re-booted. Even though some of their cover versions didn't set your scribe's torch alight, he not being an admirer of Chaka Khan or Michael Jackson, the Youngbloods finished with a jazzed re-working of "Killing Me Softly," as popularised by Roberta Flack and the Fugees. Ultimately, though, the band's original material is far superior.

The trumpeting bandleader takes his name from the old song, " (Won't You Come Home) Bill Bailey?," as popularised by countless old school jazz combos during the century or so since its composition. The name found on Bailey's passport is almost certainly Richard. His influence on this Burton-upon- Trent sextet is marked, with copious amounts of anecdotal information given out between the tunes: a friendly ramble, but with the humour sometimes coming across as slightly lame. This smattering of familiar chestnuts subjected to novelty re-jigging would be best advised for partial jettisoning, as the band are at their sharpest when just delivering the numbers straight, offering up a high standard of soloing precision, and a tight formation that presumably springs from regular gigging and diligent rehearsal. Even though around half of their repertoire is traditional New Orleans fare, Bailey makes a point of including tunes that are less expected, either because they're rarely selected, or because they pounce from just outside the jazz border.

This weekly Sunday lunchtime session at the Westwood Club is called Jazz-a-matazz, and has a successfully ambitious strategy, when many such slots appear on either a monthly or fortnightly basis. This was the Bailey band's first booking at this long-established refuge on the outskirts of Coventry. With matching orange shirts and a preference for longish locks, the Bailey band collectively cut a distinctive visual configuration. The leader's stack of music ledgers teetered atop an up-ended suitcase bearing his combo's name. The pace was set with a trouncing bolt from the starting point, courtesy of "At The Jazz Band Ball," their choice of signature tune. The flowing locks were sported by four out of six players, but stringster Peter Robinson opted for a polished, shiny dome. He frequently had the spotlight shone on this reflective bonce, taking more than the usual number of guitar and (particularly) banjo solos, demonstrating a notable broadness of vocabulary on the latter, sprinkled with dextrous finger-work.

The old New Orleans march "We Shall Walk Through The Streets Of The City" was appropriated for the soundtrack to the 1948 Howard Hawks movie, Red River, and was here offered in purist form with a nimble banjo solo. Another canny swerve was made with a rendition of "Moon Over Naples," the instrumental precursor to the "Spanish Eyes" song, with yet another stand-out banjo solo, this time impersonating a mandolin. Then, Bailey declared that their choice of Buddy Holly's "Raining In My Heart" hadn't been heard within these portals in a jazz context, and probably wouldn't be again. This ditty (without vocals) was specially selected to reflect the sudden change in the conditions outside, from sunshine to downpour. The leader slipped in an outstanding muted trumpet solo during "Trouble In Mind," and a horns-only interlude lit up "Lady Be Good." Not many tradders pay tribute to George Melly, but Bailey explicitly gave a shout-out with his exuberant singing on "Doctor Jazz." Roger Keay also reeled out a frequent run of hot solos on soprano and tenor saxophones. Near the end, there was a dip with a novelty re-write of "Summertime," viewed from a pensioner's vantage point, but the All-Stars climaxed well with a joyous strut through "Royal Garden Blues."

Deerhoof are a mismatched-looking bunch, their membership including a tall, beanpole-gangle drummer with sporadic speech containing pertinent philosophical observations, and a comparatively tiny Japanese singer/bassist who is a combined jumping bean and mystery-mime gesticulator. One of the jousting lead guitaring pair (Ed Rodriguez) prefers the curly-poodle West Coast hippie look, and this combo do indeed hail from San Francisco, at least historically. Nowadays, they dwell in at least three Stateside cities. Here in Digbeth, Birmingham, they have packed out the venue's rear courtyard space with a foetid bunch of non-air-conditioned punters. Being Americans, the band were quite shocked by the still atmosphere and intense heat conditions. This, they observed, was perhaps going to be their sweatiest show.

Even so, the sightlines weren't too bad, and the sound system was very good, so conditions for rocking were optimum. Yes, we can term Deerhoof ditties as 'rock,' but this is of a breed rarely shared by other combos, combining as it does prog-punk, kitsch-pop, surf rock, free jazz, psychedelic trancing and heavy metal (sticksman Greg Saunier discussed local anti-heroes Judas Priest at length, for so long that we forgot his original train of thought). Unbelieveably, Deerhoof just celebrated two decades of existence in 2014, still managing to retain the kind of practiced randomness and poised chaos that would normally denote a freshly-formed unit. This entire set zoomed by with an angular unpredictability that made it sound like an improvisation, although the Deerhoof songbook is so crammed with multiple movement micro-bursts that this couldn't possibly have been the case.

Yelping, staccato verses clipped into surging twin-guitar battles (Beefheartian or Thin Lizzy-ed?), screaming crescendos like 1969-vintage rock. Saunier cycled around complicated drum-figures, embellished by lashing detonations. Deerhoof are melodically intact, amidst a field of extreme atonality and repeated mini-climaxes. They are absurdist mischief-makers, sincere lovers of commercial hooklines and committed anarchist dismantlers, often during the swift evolution of a single song. Some numbers revolved around low-slung electronic pulse-ruptures, thereby allowing Satomi Matsuzaki to down her bass and concentrate on singing, whilst springing about the small stage with a temporary freedom. Already, such songs as "Paradise Girls," "Doom" and "Exit Only," from last year's 12th album, La Isla Bonita, are valuable assets to the repertoire. Matsuzaki closed the evening out with "Panda Panda Panda," featuring one of the most complex audience sing-and-response instruction sessions ever witnessed by mankind, but the crowd picked it up and the song ran right to the finish line.