Live From Birmingham: The Ghost Of A Saber Tooth Tiger, Danny Bryant & The Delegators 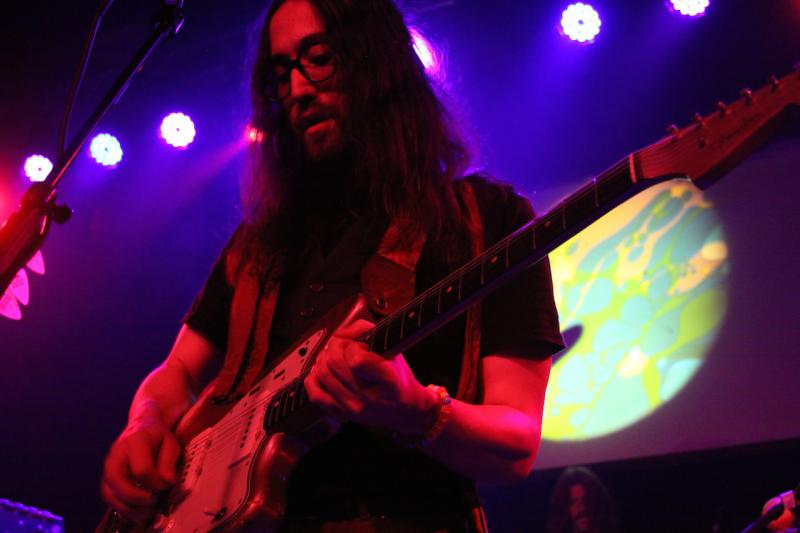 By MARTIN LONGLEY
September 9, 2014
Sign in to view read count
The Ghost Of A Saber Tooth Tiger
The Hare & Hounds
September 1, 2014

Sean Lennon expressed seemingly genuine surprise at the room's crowded nature. After all, GOASTT don't really push the knowledge that Lennon is frontman to this deeply psychedelic miasma-orientated combo. The gig's local publicity was extremely and supposedly deliberately low key, but at the very least, mere curiosity alone would have been sufficient to gather a reasonable number of Beatles obsessives, at the beginning of this rare UK tour. Fortunately, this outfit doesn't require such associations to deliver a striking night's music. Lennon and his co-creator Charlotte Kemp Muhl are devoted to the extremities of rock, coating their quite poppy ditties in a viscous tar of late-1960s distortion, phasing, delay, echo and/or general sonic-obscuring layers of the dirty-washing variety.

The entire crew were garbed in 1967-through-1973 clobber, with Sean looking much like Pops Lennon, around Beatles demise-time: black, feathered hat, and long locks, updated by current Brooklyn spectacles. This is doubtless deliberately unsettling. Muhl was surprisingly a shadowy figure, concentrating on her nimble bass lines and contributing backing vocals or co-vocals that were as deeply mired as Lennon's in special effects. Their keyboardist favored Mellotron-like swathes, adding to the beautifully-separated morass of the guitars. The leaders almost seemed slightly nervous, Lennon rambling in his appealingly jokey introductions. There was no such hesitation in his guitar playing, with most of the key solos erupting from his molten strings in high-frazzling appreciation of the excessive UK voltage, compared to the weedy US and Japanese standards. His effects pedals promptly cut out for a spell. It was often difficult to discern the words, but the payback was in a richness of psychedelic vocal surfacing. The pair of covers was also finely picked, with an orgiastic number by nearly forgotten late-1960s rockers Gandalf, and as a final tune, Syd Barrett's "Long Gone," piling up the swirling density even further. Despite Muhl's voiced distaste for encores, we could easily have lapped up another ten minutes or so of these heightened freak-outs...

Only 20 minutes before stage-time, Danny Bryant's wife woke him up and reminded the bluesman that he had a gig to play. This 34-year-old English singer and guitar-slinger had just flown back from a five-week Stateside tour where he was fronting Walter Trout's band, while that esteemed blues-rocker was getting used to his new liver. Startled into motion, there wasn't much sign of such a recent slumber, once Bryant lurched into power-blues hurricane mode. Like Trout, he skirts the tender line between disappointing hardcore blues fans with rawk bombast, or sounding too rootsy for the mainline metal-greasers. Yes, Bryant sometimes slips into bloated lovelorn ballad blandness, but his lumbering, sludgy guitar sound is ever-present, grinding out a bluntly heavy solo chunder. He's not massively interested in any squealing high-note picking, instead concentrating on a mid-line gush of gruffly heavy riffage, powerful in its urgent body-blow weight. Bryant's vocals rise above all this, suggesting a soul-blues root to his hollering yowl. The bass and drums trio partners don't make any untoward moves, with the latter's crashing snare often becoming too insistently dominant.

Most of the songs were Bryant's own, with "Take Me Higher," a selection from his album Temperature Rising (Jazzhaus, 2014), being a particular grower. Meanwhile, "Gun Town" provided a gentler space for contemplation, at least before its guitar solo erupted. Getting to the blues core, he threw in "Hoochie Coochie Man" (penned by Willie Dixon, dominated by Muddy Waters), and then proceeded to deliver surely the heaviest rendering of Bob Dylan's "Knocking On Heaven's Door" ever heard. Somewhat bullishly built, Bryant urged folks to purchase his fitness video at the merchandise stall, then issued another robust guitar solo, mean and frazzling as it spilled out from the Bilston stacks.

The Delegators
The Hare & Hounds
September 4, 2014

When did ska turn into rocksteady? When did that transitional form become reggae? And just where does bluebeat nestle? None of that matters much when the dance floor's full, and the Delegators are demonstrating their abundant retro re-creation abilities, pumped up directly from London. Besides, they're not averse to trimming their edges with jazz and soul elements, with most of the songs being self-penned, after the style of the times, principally the mid-1960s. Together for six years now, nearly all of their numbers are sprightly up-tempo trotters, singer Janet Kumah fronting in the ultimate sense of the word, with a star-quality slickness.

Her powerful voice acted as a bold communication link with the audience, dance gestures precisely honed for meaning, and married with exact timing to the music. Kumah managed to make all of this appear pretty natural, capitalizing on a spontaneous feel, even though it's clear that these Delegators play and rehearse with great regularity. Most of the members also provided charged backing vocals, topping off the tightly chopping lightness of the tenor saxophone, organ, guitar, bass and drums. Kumah was personable, but also a touch too bossy as she urged the crowd into singing, clapping and moving forward—but when she took a break from the stage for a pair of instrumentals, the void was very noticeable. Some of the songs from the Delegators debut album are notably catchy, not least the title track "All Aboard," along with "Trouble" and "I Didn't Mean To Break Your Heart." The set was probably a tad too short, and both band and audience would probably have benefited from two halves, with a replenishing break.