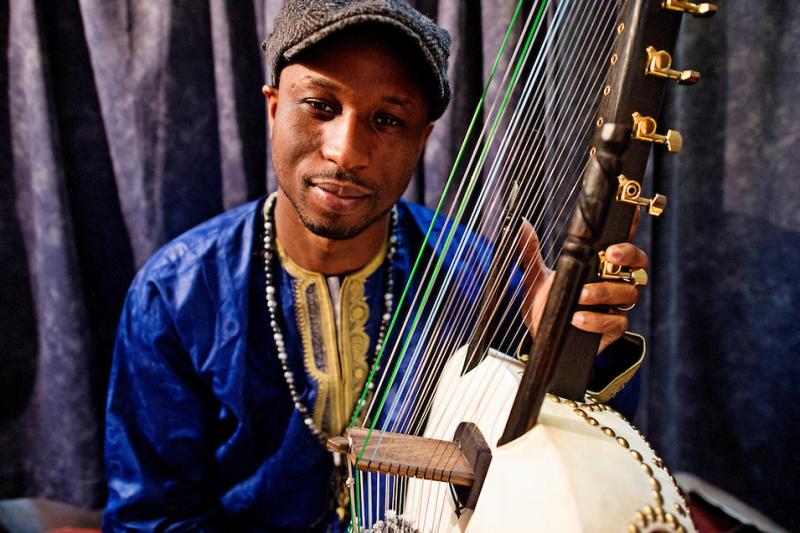 Singer, guitarist, rapper and comix artist Jeffrey Lewis is always itching to change the name of his backing bands. Here's yet another, with the Jrams being a bass-and-drums pair (Heather Wagner and Caitlin Gray), keeping the tourbus lightly populated for maximum road-grease on the leader's endless touring schedule. He was returning to The Actress & Bishop's upstairs room after a couple of years, to find the performance positioning improved, with the band playing on a slightly-raised circular corner-stage. He pulled a good-sized crowd, populous without being cramped, allowing a good vantage point for all. Lewis has finally advanced technologically. Previously he'd quaintly presented his narrated comic book segments of the set by physically flicking pages whilst standing on a chair. Now he's actually brought along a projector, angled at a wall-taped white sheet. More conventional, perhaps, but allowing more peepers to see his artwork in action. On this evening Lewis chose a complete history of colonialism in Vietnam, and a disconnected creeping-brain creature's adventures, just a couple of his typical comix preoccupations.

Mostly, though, the gig's about rockin' and rollin,' alternating between near acoustic ramblers and amped-up punky fits. Lewis is a complete individual, but he's continuing the lineage of riff-chugged wordsmiths that include Bob Dylan, Jonathan Richman, Lou Reed and Mark E. Smith. The last pair even had their songs covered during this set. The Fall's "Cruiser's Creek" marked the point where the gig ignited, with the threesome on particularly fiery form, not that most Lewis shows don't already involve varying degrees of wired tension, clenched nerves and joking releases. He's following the less-acknowledged trail of whitey post-beatnik rap gushing, as mastered by the above-named artists. When Lewis gets into a rambling rush of syllables, he displays a remarkable feat of memory, a substantial gift for evocative turns of phrase, and a snarling delivery that always convinces a crowd that he means what he's spouting. The Jrams fed off this, shooting back energy that further goaded their leader. The trio played tight shit, but still made it sound chaotic and ramshackle.

Lewis sang about his love of English food items, about the unnerving screams of his new neighbour, and about meeting (maybe) Bonnie 'Prince' Billy on the L train in NYC. All of these frightening, in their own ways. When he scuffed on the distortion pedal, his acoustic guitar became a monster, and the band rocked out like the Velvets or Sonic Youth, then he'd snap it off and return to a ballad state. The end-run was magnificent, the night peaking with a recent analysis of the Pussy Riot imprisonment, with "WWPRD" going way beyond that starting point, to comment on the whole whoring practice of band sponsorship by big business, increasingly prevalent within the modern music scene. Bassist Gray also switched to a tiny keyboard on several tunes, and for this one, she taped down a single key, to create the kind of drone-tone familiar to Indian classical music fans, then launched off into one of her nimbly propulsive basslines, whilst trading vocal lines with Lewis as the heat magnified. He's a glowing raconteur, choosing to encore with a pair of Lou Reed songs, advocating a retrial of the dead one's less popular Mistrial album from 1986, which he says was omnipresent in the bargain bins of NYC. First there was the softly drifting "Tell It To Your Heart" and then "The Original Wrapper," which nestled perfectly next to Lewis's own verbal streamings, punctuated by savage guitar bursts that were made all the more powerful due to their two-second instantaneousness. Yes indeedy, this gig certainly ranked high on the always-peaking Jeffrey-ometer!

Andalucian Jesús Fernández was both the lead dancer and choreographer for this two night presentation of his Cádiz flamenco production, at a venue that's probably unknown to most Birmingham music freaks. The Elmhurst School For Dance is approaching its first decade of activity, and still has the gleam of newness to its portals. The performance theatre has a steep bank of seats, and a glove-like acoustic warmth, making a highly fitting home for an intimate music/dance evening. Fernández kept himself firmly centre-stage for the duration, so the piece was crafted to display his own talents, with a surrounding cast (from Cádiz and Madrid) of a guitarist and singers, with a certain amount of doubling up on palmas (flamenco hand-clapping) and percussion. This was a form of gentrified flamenco, when compared to the usual straggly locks, open-necked shirts and surprisingly mobile beer bellies. Less hardcore, but this was no bad thing, lending a whole host of modern dance trimmings to the moves, becoming more theatrical, paying greater attention to a visual panorama, to the dynamics between subtle minimalism and outbreaks of more active climaxing. This was conveyed via a sensitive relationship between music and gesture, caught under sparse lighting, painted with precisely directed pin-points of illuminated action.

Fernández combined his detailed movements with a more earthy energy, mixing in some humour with the drama. The theatre's sound system caught the voices, guitar and palmas in a well-balanced spread that still resembled an acoustic sound, though sensitively amplified. Performer positioning was constantly shifting, with a trio chorus standing in various locations, lit differently each time, and guitarist Jesús Núñez moving his tiny stool around to surprise the audience with a fresh set-up for each thematic segment. The work possessed a very male-orientated perspective on flamenco, very much concentrating on Fernández as a central performer, sometimes directly in dialogue, both physical and verbal, with lead singer David Vázquez. Towards the end, Anabel Moreno revealed her dancing potential, having previously rationed herself with palmas and backing vocals. It would have been a good idea to have given her an expanded role, heightening the female contribution. She clearly could have handled such a shift in focus.

Muzikstan was a mini-fest within the larger Celebrating Sanctuary season, bringing together artists from divergent rootsy traditions. The Old Print Works provided a good example of how, with basic internal embellishments such as mood lighting, comfortable sofas, a makeshift bar and nostril-tingling samosas, a bare factory environment could be transformed into an cosy music space. There was even a small bakery situated on the long corridor journey to the toilet facilities, though this was happenstance rather than integral design. The headlining act was Senegalese kora player and griot (storyteller by heritage) Kadialy Kouyaté, leading a four-piece band. During the previous weekend's Sanctuary all-dayer he'd performed solo and in duo, but this was another facet, revealing the kora as a lead instrument, backed by guitar, bass and drums. Kouyaté's silvery striations were comparably evocative, but amplified with a cutting edge, shimmering across a thumping and pumping electric foundation. Most of the solo features were played by the leader, but there were phases of interlocking lead guitar licks, along with some pliant basslines and snapcracking drum parts. Most of the tunes maintained a vigorous forward momentum, but a couple of them stood out as being notably melodic in their repeated hooklines. Three or four numbers before the end of the hour long set, the climax arrived, when a ritualistic rhythmic repetition pushed the dancing crowd into full trance mode. Not so much a set of light, shade or variation, but more of a mission towards steadily-entangling hypnosis. A later climax was provided by veteran local dj Zuppa Inglese, spinning Afro-sounds that took in Nigerian Afrobeat and Congolese soukous, stopping off in Bollywood on the way.

The Peatbog Faeries hail from way up in the north of Scotland, on the Isle Of Skye, where the urge to fish is so compulsive that it's causing a delay in the release of the band's next album. They've been together for two decades, or possibly a few years more, which might account for their folk fusion bent remaining true to the sound of the 1990s dancefloor, in the days when crusty hippies willingly tangled dreadlocks in their bagpipes. Here in Birmingham, the still-enthusiastic audience appeared to be closer in nature to a mainline folk crowd. During the course of the evening's first hour, the attendance evolved from sparse to fulsome and wildly charged, even whilst clashing with an unnameable sporting event. The Faeries certainly command a following who seemed clued-in to this repertoire, and who were eager to start up their pogo-ing steps from the outset. This was a genuinely surprising reception for a combo that has been around for a long time, and whose fortunes might have been expected to be in decline by now. Of course, this electric vibration was also a direct result of their playing abilities, assisted by the venue's crisply pumping sound system.

Peter Morrison is the frontman. Clad in kilt and hoisting the bagpipes, he's dominant both visually and sonically. He expressed a softer personality when playing his selection of whistles, with this variation providing some dynamic level-changes within an approach that's largely ruled by stomping and skirling. The bedrock of their instrumentals is provided by bassist Innes Hutton and drummer Stu Haikney, with a tendency towards somewhat metronomic hammering. This might be anathema to appreciators of syncopation, but it succeeds as a folk-dancing goad. Keyboardist Graeme Stafford is responsible for the electronic bulk, although the band now seem less reliant on their old techno influences, heading in a more organic direction. After all of their various detours into trance, rock and reggae, they've settled on a fusion that centres around Scottish roots music itself, the fusion element coming from their general delivery, with a hardened amplified sound. The style remains unsullied Celtic.

The second set relieved what might be the combo's main problem, derailing the ever-present density by featuring Morrison and fiddler Ross Couper in an unaccompanied duo. The return of their bandmates was lent greater power by their temporary absence, giving the eardrums a respite. The Faeries also snuck in a couple of slower, gentler tunes. Then, they entered a brief South African phase, highlighting Tom Salter's guitar chops, at first with just him and the drums, then down to the man alone, which was a curious piece of minimalism, explained by his cohorts returning to the stage armed with glasses of red wine. Then it was time for the final overloaded onslaught of folk'n'roll, bullish but beautiful in its decorated driving.