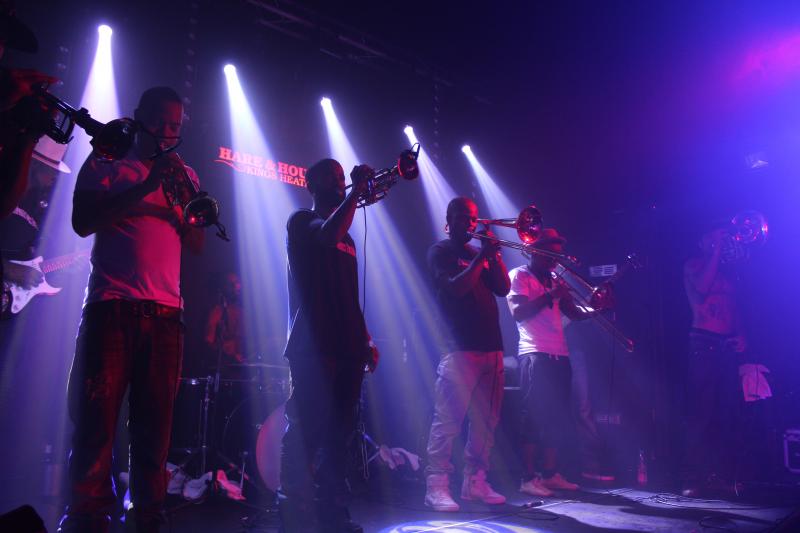 The Hypnotic Brass Ensemble don't struggle to cram the main upstairs room of the Hare & Hounds, as now-regular guests of its Leftfoot promoters. Although now dwelling in Brooklyn, the Hypnotics mostly grew up in Chicago, and seven of them are brothers, sons of Phil Cohran, who is famed for being a Sun Ra disciple in the late 1950s and early '60s. Amidst the ongoing flood of post-New Orleans parade-style bands, each torch-bearer of the style has to bring their own personality to the brass-structure, usually via the grafting of compatible musics. Most often this means hip hop, but funk, soul, gospel and free jazz often rear their horns. Perhaps to make themselves more mobile, the Hypnotics nowadays leave the sousaphone and euphonium back home, and have moved towards having a more conventional band structure in the back line. In later years, there's a drum kit, bass and electric guitar to underline the sprawling front line of trumpets, trombones and baritone horn. Plus, most of the band sing or rap, to varying degrees.

The Hypnotics employ a hip hop feel, but it's not straight rapping, being equally amenable to funk and soul inflections, as well as meandering into a kind of beatnik spoken word zone. They've created their own composite band style that sets them apart from their fellows, combos like the Youngbloods, Hot 8 and Soul Rebels. They also respect the originators of this 'modernised' form of New Orleans marching, the Dirty Dozen, and their descendants, Rebirth. The set keeps matters mixed, blending vocal and instrumental numbers with well-balanced dynamism. This crew always maintains a high degree of partying excitement, so their gigs should be judged on how high, or slightly lower, they differ from the 'norm.' With extended crowd-surfing right to the back of the bar, crazed trumpet-wing stabbing, manic drum features and full ensemble chanting, this gig was well up to their expected level. Some of the older tunes are more ingrained in the collective consciousness, such as "Party Started" and "Kryptonite," the set climaxing with what sounded like either "Tank" or "Gypsy," which could have been grown from the manic musical hotbeds of the Balkans or Haiti, or both. Whichever origin, it's their most compulsively danceable tune of the set.

Erja Lyytinen is a Finnish blues slide guitar specialist, which might be viewed as a rarefied occupation by some. She's built up quite a reputation on the European blues circuit, but only managed to pull a modest crowd of around 50 punters, for this Thursday night show in the fairly voluminous Robin. Nevertheless, Lyytinen easily satiated this rock-hungry gathering, and surely word will spread further for her next tour. It's only during the last few years that Lyytinen's profile has grown, via regular road-hogging. Most of her soloing does indeed employ a bottleneck, but she does occasionally side-step into conventional picking. Lyytinen's voice is also suited to the uprfront, forceful delivery, mixing up hardcore blues, mainline rock and a few stray elements of pop balladry.

She's at her strongest when playing the undiluted blues, particularly with "It Hurts Me Too," after Elmore James, one of her biggest influences. Lyytinen's own songs are lighter in tone, but also possess a sharp wit on the verbal front, usually with a modernisation of the blues form from a female vantage point, turning some of the accustomed clichés upside down. There's a great micro-moment when her "Hand In Hand" closes out, after having 'critiqued' an old boyfriend over several verses, with a spat-out exclamation of "bastard!," just as the song crumples to an end, and just the way it is on her album, The Sky Is Crying. Lyytinen is a queen of the banter, even if this makes her slightly too much of an entertainer, ever eager to befriend the crowd. She's sincere, but with a streak of satirical defusion. Another highlight was "Steamy Windows," an ode to car-sex, and surely one of the most adhesive songs in her set, with its heavily hooklined chorus, courtesy of original composer Tina Turner.

After a late start, presumably due to some soundcheck delay or equipment failure, the near-capacity crowd filed in for a prime show delivered by The Impossible Gentlemen. A preparatory airing of their latest album, Let's Get Deluxe, prompted fears that their sound would be lacking in bite, its music covered by a sheen of smoothness, and a general blandness. The live experience is another matter, loaded with extra energy and a notable rapport between the players, now that this outfit is almost accidentally becoming a long-running affair. Their lively sense of humour is an additional asset, as they reacted to Adam Nussbaum's hi-hat pedal malfunction, grabbing hold of some extra adrenalin to combat their running trials. The most recent album's tunes are dominant, but there are also selections from the band's first two releases. The communication between guitarist Mike Walker and pianist Gwilym Simcock is particularly strong, as they graft their lines together closely during each involved thematic chase. Simcock has grown towards adding synthesiser tones to expand his sound, whilst Walker tends to deliver with increased sonic extremity in the live arena, pushing up his smoking distortion edge. Iain Dixon is more wide-ranging, working between tenor or soprano saxophones and bass clarinet, but also introducing a small keyboard set-up, turning him into the combo's chief palette-changer. Steve Swallow has now departed, replaced on the bass stool by Steve Rodby (previously present as the band's producer), a much less stylistically distinctive player, but still a sturdy element. Due to their tardy start, the Impossibles had to force an encore into the time-span, due to sincere and overwhelming enthusiasm from the audience. By this time, they just couldn't be stopped.