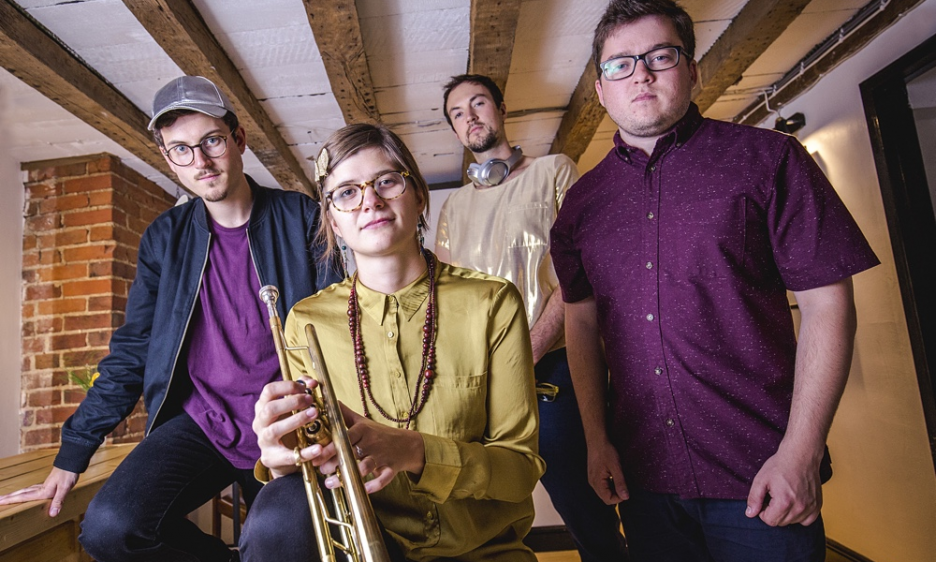 Tonite, for one nite only, this is the band called Dinoseb, or perhaps Polarsaur. For some mysterious reason, Dinosaur's regular sticksman Corrie Dick went missing, to be guest-starred by Seb Rochford, most famed for his own combo, Polar Bear. Even more shocking was the manifestation of this supreme fill-in drummer in his shiny-domed state, now completely hairless after decades of boasting the biggest bush in Britain (at the very least). His distinctive look might have disappeared, but Rochford's distinctive percussive approach remains intact.

The Dinosaur repertoire now rotates around their second album, Wonder Trail (Edition Records). Keyboardist Elliot Galvin's array has lately been shrunk to the tiniest of portable consoles, matching trumpeter Laura Jurd's own electronics unit. She's using this more, but not necessarily at the expense of horn solos, now perfecting the one-handed technique on both instruments. The Dinosaur sound has moved closer to that of rock, pop or electronica outfits, whilst still retaining a strong jazz core, probably most rooted in the early 1970s tribal-Stockhausen avant-funk phase of Miles Davis, though manifested with a more whimsical nature, floaty spacey rather than dirty kosmik.

On "Shine Your Light," Jurd had a pinprick exactness, spouting filament threads, matched by detailed electronic overlays. Rochford's drumming was measured, full of detailed runs and patterns. Next came a muted flugelhorn, then a swift return to trumpet, Rochford swapping rubber for sticks. There was a chirping of tuneful melodies rather than rampant soloing, adopting more of a group vocabulary. The joint vocals have taken on a folksy feel that's reminiscent of This Is The Kit, fey and faint. Conor Chaplin's bass frequently sounds like synth-line lowness. The older "Extinction" opened with a skeletal Medieval funk, shared between trumpet and bass, "And Still We Wander" provided a satisfying conclusion. A certain amount of jazz feel is being lost at the expense of other facets, but Dinosaur are still maintaining the unusual melodic content, still sprinkling starry textures over their compositions, which are increasingly songlike, as opposed to being extended soloing vehicles.

Meatraffle came up from London, with allegiances to rock, electronica and jazz, in that order. They're signed to the frequently adventurous Moshi Moshi record label. They have a singing and trumpeting frontman (the enigmatic Zsa Zsa Sapien): he's not a maestro horn high-wirer, and he's not a great vocalist, but he has a stranglehold intensity, locked tightly to the keys, guitar, bass and drums, Meatraffle's trance repetitions and dogged layerings. They have messy edges, all the better to bleed out the power of their songs, with the bass of Cloudy Truffles frequently coming to the fore, her deft fingerings crafting compulsive low-lines, and her occasional lead vocal duties offering a melodic contrast to Sapien's narrations.

The Courtesy Group played just before Meatraffle, a local Birmingham outfit who have been together for two decades. Their heavy, chugging, repetitive wordiness recalls other indigenous bands from old times, such as the Noseflutes and The Prefects. Singer Al Hutchins is a communicator in the extreme, joking between songs, committed and menacing whilst in the midst of a ditty. He stalked around, tugging his extended microphone lead, sitting on leather armchairs, hurtling against walls, staring out audience members. Twinned guitars, bass and drums thundered in unison, grinding with metallic angularity. Chaos was controlled.

Vampire or pirate? Johnny Depp is both, and he's even a Keith Richards, though he doesn't offer any lead guitar solos. That responsibility is left to Joe Perry, who is infinitely preferable as part of the Hollywood Vampires (formed in 2015), when compared to his old Aerosmith role. The concept of this combo is to exhume numbers popularised by now-rotted rock stars, with the mighty Alice Cooper taking the lead vocals. Except when Depp actually stepped up front to sing David Bowie's "Heroes," which was the tattooed, gypsy fortune teller pirate's greatest moment during this gig in the hangar-like space of the Genting Arena, not far from Birmingham's airport. At the apex, there were propulsive classics such as the close proximity readings of "The Jack" (AC/DC) and "Ace Of Spades" (Mötorhead), forming a glorious card-playing sequence (if that's the right 'jack'). At the point in the set where a series of departed artist images floated past (during one of several Vampires originals, "My Dead Drunk Friends"), and the riffs mounted up in a monumental heap, a certain melancholy mist seeped around the vaulted heights, blended with a sour celebratory mood. Captain Beefheart was just about the most alternative creator so honoured, though the Vampires neglected to play one of his tunes. Perry transformed into a bluesman, soloing liberally during Tiny Bradshaw's "The Train Kept A-Rollin'" (in its Yardbirds incarnation style) and Peter Green's "Stop Messin' Around," both of these having been previously handled by Aerosmith.

It was a superb combination, slick yet ramshackle enough to create a palpable tension. Even though surrounded by the trappings of stadium rawk, the Vampires existed in their own sweaty basement garage Goth club, fantasising about the excess superstardom which they now possess. The sound balance was excellent too, particularly for such a bombastic large-scale show such as this, allowing guitars to cut, knit and mesh in an unholy din, and kicking Alice forward so that every nuance of his mighty rock'n'roll sleazester voice could be greasily fondled by we drunken audiophiles. When he hit the climactic "School's Out," we fainted in ecstasy, this being one of the greatest alternative rock songs ever produced (and your scribe's first 7" single acquisition). We also had Ian Hunter suddenly stroll on, strumming acoustic guitar, to casually singalong Bowie's "All The Young Dudes," that being this Mott The Hoople mainman's biggest spinner. Were we all caught in a waking communal nightmare?!

The Flapper has an ingrained track record as an alternative rock venue, perched on a canal and surrounded by flats, its basement having hosted the Acid Mothers Temple on numerous occasions, plus some other bands as well. On the night of this slow Monday gig, it looked like it had only a few weeks to live, sold to the highest condo-bidder, but then a reprieve came, and the joint now has at least another year on life support, carrying on the weirdo rockin.'

Black Asteroids are a basic Birmingham line-up of bass (Simon Donovan) and drums (Chris Allen), but their space rock sonics spread wider than might be expected, through volume and effects. Even so, the limitations of being a duo eventually become apparent as the repetition and minimalism slowly throbbed too far down a lone dead end. Some added free-form abstraction would have opened up further possibilities, but the Asteroid path ultimately ended up being too monomaniac. The preceding post rock foursome Solars (also local) explored a more varied set of tactics, less brutal, but with increased arranging capacity, working with lattice guitars and boasting tunes with varying characters.

Singer and harp-blower Paul Lamb is one of the UK's prime bluesmen, now having notched up a substantial four decades as a bandleader. Lamb was flanked by a pair of guitarists, with bass and drums to the rear, rolling into "Baby, Please Don't Go," with solos bursting alternately from Ryan Lamb's guitar, and the leader's own harmonica, in-between the deep growl vocal lines. The harp amp was set for full-grained flooding, whilst second guitarist Chad Strentz took a lead vocal, Ryan Lamb (Paul's son) delivering another escalating solo during "Sometime Tomorrow." Considering the stature of this band on the British blues scene, the audience was disappointingly sparse, particularly for a Friday night.