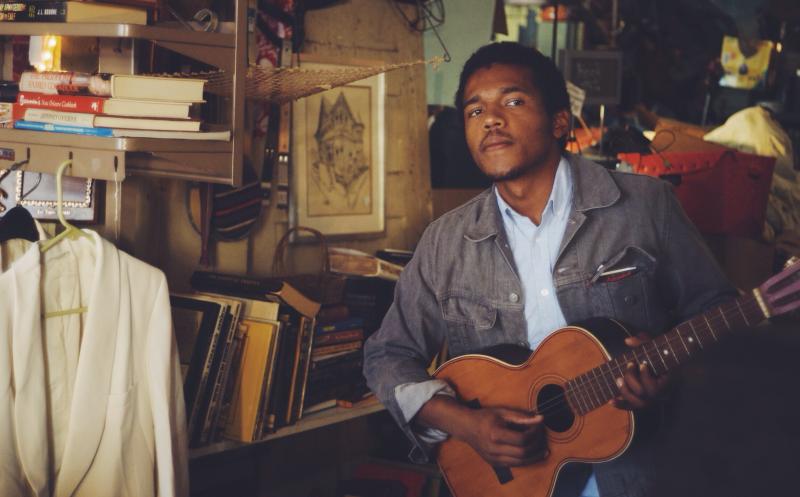 Usually, audience demographics are spread closely in line with the age of a performer, but such things were not predictable at Stateside bluesman Benjamin Booker's gig. Although born in Virginia, this 25-year-old singer/guitarist now dwells deep down in New Orleans, adopting many of the traits commonly exhibited by gnarled oldsters three times his age. The crowd in the venue's smallest room (Academy 3) looked to be three-quarters in the forties-and-above age range, with the remainder being around the late-teens or early-20s mark. Curious. Or maybe not so much, as Booker only uses blues as his beginning point, adopting the low-down swampy Fat Possum grind of R.L. Burnside, Junior Kimbrough et al, going right back to Lightnin' Hopkins. His actual delivery involves a pumped-up recent-rock pace and songwriting tack, loading in The White Stripes and The Black Keys, driven with a manic energy, lashed with distortion, feedback and general critical overloading. Hence the more youthful pockets in the audience, possibly picked up via his opening-slot stint for Jack White.

None of this matters much. If only every gig featured an uncategorisable audience along with its uncatgeorisable music. Hey, there was even a significant moron element voicing its presence at the show! This was a tumorous growth in the crowd that seemed to be well into Booker, but had a perverse means of displaying this, shouting out during his quieter sections, and snorting comments that were on the border of being insulting. Maybe they'd only heard a song or two, maybe they'd been guzzling beer all day.

Booker was backed by bassist Alex Spoto and drummer Max Norton, the latter imbued with a particularly hell-for-leather compulsion to reach the end of each song, smashing and slamming with an exhilarating degree of hard-hitting energy. The leader demands such extremity, to match his own cranked-up rifferama. The trio mostly opted for a thundering wall of sound, an accelerated boogie that teetered on the divide between hard roots and even harder rock. Sometimes the tunes didn't match up to the vigour, and the rolling didn't prompt too much in the way of either headbanging or fleet footwork, but most of the crowd probably felt like standing there and adopting an eye-of-the-hurricane stillness. An effective mid-set tactic was for Spoto to swap bass guitar for fiddle, and for Norton to pick up a mandolin. At first, Booker downed his guitar, and matters got really minimal, then for a second number, he picked up his axe again, and offered a more trundling aspect to this downhome section of the evening. Then it was a return to the core rockaboogie sound, until what seemed like maybe the 40 minute point, where they'd exhausted the contents of the debut album.

Then, Booker launched into an extraordinary instrumental extravaganza that took the set almost up to the hour mark. This was more indebted to Jimi Hendrix and The Stooges, as he began to rip out the full howling capacities of his guitar, whanging it around to shape feedback, cranging it down on the floor, stepping on it and hammering a beer can on its strings. The climaxes rose and fell, with bass and drums working closely in their dynamic improvisation. Meanwhile, Booker was perched on the frontal stage barrier, teetering back into the arms of the crowd. After just distributing the band's backstage beer, shaking up a can and spraying them, he suddenly toppled, guitar in hand, soloing crazily as he rolled on the sea of welcoming hands. The venue's regulatory signs threaten immediate expulsion for crowd-surfers, but Booker was thankfully immune to such punishment. Musically, things were getting deranged. Here was the full excitement hinted at in the songs, but now delivered with a feeling of genuine unhinged uncertainty. Perhaps they do this at every gig, or maybe this is some fresh area of exploration. After 15 or 20 minutes, the tension was still tight, the rock'n'roll scream arcing right up there at its highest level.

Grey Wolf specialise in old time Stateside folk music, principally from Appalachian parts, although they do habitually trawl back across the Atlantic to acknowledge Irish and British roots. Sometimes a tune might swim over there and back, and then overseas again, constantly re-configuring itself, subject to folk evolution. They hail from Ludlow, and the line-up is Jim Allen (banjo), Ben Walsh (fiddle) and Martin Thomas (guitar/mandolin), although there is a certain amount of swapping around between the latter pair. The trio were relatively fresh from their two appearances at the Moseley Folk Festival, and this was an opportunity to catch them in an extremely intimate setting, at this cosy Kings Heath home of roots music.

The wolves banter and bicker like an old married threesome, constantly poking fun at each other, and at their general circumstances. Despite mocking Allen's difficult time with tuning, and poking a sharp stick at the banjo in general, their antics are pretty amusing, providing added entertainment between the tunes. They also sling in a number of less expected songs, by Diana Jones, for instance, the recently rising Nashville singer-songwriter. Then there's the more likely inclusion of numbers by Doc Watson and Sister Rosetta Tharpe. They also played "Cuckoo," an innocent-sounding song whose roots lie in Medieval England, but which might actually be dealing with the realms of sexual commodity. Allen displayed his skills in the frailing style, with Thomas handling most of the vocal numbers, the three of them rejoicing in the kind of rapport that's only possible within a frequently-together unit. There's an equality to the group spread of sound, but each player is continually soloing-in-motion, rising up in turn, according to where the ears of the audience might alight at any one moment.

Blondie usually put on a good show, but there was a palpable electric crackle between them and their audience on this night. Even though the Academy's main room is pretty spacious, this was still a more intimate setting when compared to some of the band's previous appearances in Birmingham's largest venues. Big enough to garner an enthusiastic mob, but small enough to allow relatively close proximity to the stage, having the charged feel of a club-gig. Blondie were also fired up for rockin' fun, unavoidably coming on like a greatest hits jukebox, but also tipping in a substantial number of newer songs, some of which have potential for future hook-embedding: "Euphoria" and "Sugar On The Side" continue their old tendency to probe styles a step or two sideways from rock'n'roll, with the latter tune featuring Colombian electronicist Systema Solar, present on the backdrop video.

Otherwise, it was an impeccable rush of classic compositions, from "Hanging On The Telephone" to "Heart Of Glass," "Rapture" to "The Tide Is High," and "Atomic" to "Union City Blue," this last reserved for the three-number encore. There were also a clutch of fresh covers, with gobbets of "(You Gotta) Fight For Your Right (To Party!)" (Beastie Boys), and a locally-targeted resuscitation of "War Pigs" (Black Sabbath).

Such is the enormous legacy of popular hit single Blondie tunes, it's partially frustrating that they don't dig up a few more obscure truffles from their early albums. Ultimately, though, the 90 minute or so set sent the audience reeling with its sheer weight of memory-jerking monsters, drawing in lovers from many zones, including punk, pop, reggae, disco and hip hop. This band always had their fingers on the pulses of emerging scenes, ready to turn the alternative into a still-cool populist plundering.

Debbie Harry is a sprightly singer and mover, considering she's on the cusp of being a septuagenarian. Main man Chris Stein kept himself more in the background, sending co-guitarist Tommy Kessler out to the front. Drummer Clem Burke had no such reticence, powering the band with an amazing excess of energy, imprisoned behind his plexiglass screen of onstage sonic containment, spinning his sticks eight feet in the air, but always catching them on the beat. Maybe the entire tour was conducted at this level, but it seemed as though the band were particularly fired up for this performance, eagerly feeding off the rapturous crowd reaction. In the end, this was one of their best gigs on Birmingham soil, and superior to shows that your scribe has also witnessed in other cities.