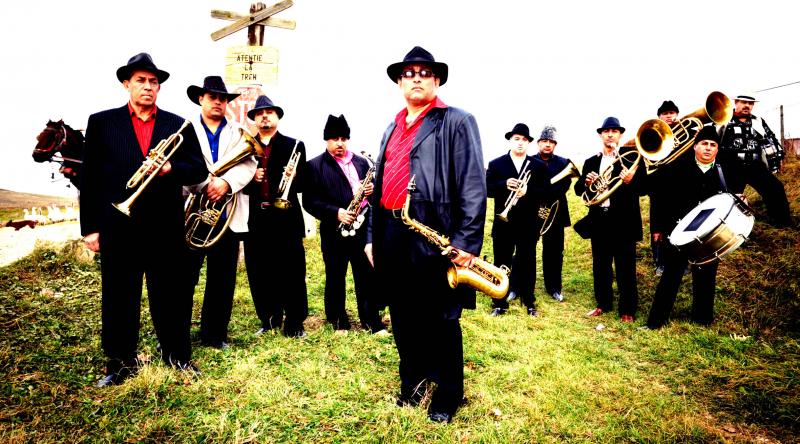 Herald the hedonism! An Alabama 3 gig typically presents a rolling rock'n'roll party vibration, but adopts electronic practices, as well as being saturated in rootsy juices. Delta blues, dub, country, soul, gospel, hip hop and house are all pulped up in this anarchic collective's bloody sack of styles, and slung full-face into the assembled audience, who also appear to be drawn from a bewildering variety of musical clans. This hardy Bilston venue is benefiting from a new lighting rig, and the sound mix was particularly well-delineated for an almost-two-hour show.

Even though tightly directed, the three-piece vocal front-line imposes a deliberately casual looseness on the proceedings, making their routines appear to be improvised rambles. This London band hanker after Americanism, and you really would believe that each of their lead singers hail from the Southern States. Main man Larry Love is the grizzled, bony, wasted, rock'n'roll archetype, clad in a floor-length fur coat and sporting a Stetson. Meanwhile, the Very Rev Dr. D. Wayne Love adopts a narrative emcee posture, a kind of urbane gangster-poet, delivering rambling rants of sociopolitical observation, coupled with an absurdist wit. Aurora Dawn is a more conventional soul-rock belter, slick, loose-limbed and entwined with coolness. This front-line combination is perfect, and all three are wrapped in shades, to escape grisly reality.

Guitars, keyboards, a dj/laptopper, drummer and Harpo Strangelove, a cutting harmonica-blower, all contribute to a sound that's superficially shambolic, but always driving hard into the right hole. The Alabama 3 make their stageshow appear to be perpetually teetering on the edge of chaos, but for this to hang together they must be pretty damned rehearsed. There's a massive confidence that allows them, and particularly the vocalists, to take chances, tossing responsibilities to one another, whilst concentrating on taking a swig of beer or champagne. Larry Love seemed to think that he was in Wolverhampton, but The Very Rev Love shouted out for Bilston, correctly placing the combo on the Black Country plane.

Embarking on a Saint Patrick's Day tour, Belfast's Craobh Rua quartet arrived in Birmingham two days after that frothing date, welcomed by a capacity gathering in the cosy Kitchen Café. Artists always enjoy playing here, a close bonding with their audience guaranteed. The translation of the band's name is 'Red Branch,' after the Red Branch Knights Of Ulster, from Irish mythology. A hardcore folk sound was preferred, with a line-up featuring fiddle, banjo/mandolin, guitar and uilleann pipes/whistles, the players huddled in a tight group, heads down for a stirring sequence of reels, jigs, hornpipes and songs. The latter had a ballad tendency, and it was here that the material was at its lightest. They shared out the jokes, anecdotes, explanations and introductions between all four members, though it was guitarist Jim Rainey who dominated, radiating the jumpy qualities of his scatterbrained wit.

For some mysterious reason there was a large cluster of womenfolk towards the rear bar-side, intent on gabbling throughout much of the performance, even during the band's between-tune announcements, often obscuring the subtleties of both music and words. It's hard to achieve the right balance during a gig which had a celebratory atmosphere, but also featured abundant stretches of a fairly quiet nature. Towards the second set's climax, there was a tendency for flighty song and audience singalongs, so this became less of a problem eventually. One last fragile passage came with Turlough O'Carolan's "Squire Wood's Lamentation On The Refusal Of His Ha'penny," easily the best title of the session, opening with just whistle and guitar, then Desy McCabe switching to pipes, and the whole band entering the chase. The flighty evening ended with a racy rendition of "The Battering Ram," followed by a pair of west coast favourites.

First, absolutely inexplicably, the rows of seats were still fixed for this rollicking Romanian gypsy brass gig. The stalls of the Town Hall are multi-purpose, and can be cleared of seats, with drinks-vending tables situated to the rear, turning the space into a club zone. Unfortunately, this didn't happen. Even though Fanfare Ciocărlia tend to play at racing speed, and with deeply involved time signatures, some attempt at dancing is usually likely, even if feet and bodies are inhumanly misplaced. So, this large ensemble had to work much harder to produce their desired atmosphere, not helped by the oddly sparse attendance and the very prompt 8pm start. No sooner had the audience arrived (and some still hadn't), than they were plunged into an immediately hyperactive musical frenzy. These Romanians, from the village of Zece Prăjini, play every note as if someone's getting married, and has been partying all day. It takes a while to acclimatise, so fortunately there was an interval, in the name of re-grouping.

Fanfare is the term used to designate a brass band, and Ciocărlia means 'skylark.' The band have existed in this touring form for nearly two decades. The repertoire included two or three oft-heard classics from the Balkan region, but also a clutch of re-designed numbers from the spheres of jazz and popular music: "Caravan," "Summertime," "Born To Be Wild" and the 007 theme, although not much like any way that we've heard them previously, and also inserted within other tunes. The general structure involves a back line of low-plunged traditional tenor and baritone horns, huffing out basslines with remarkable nimbleness, and then a pair of percussionists, working with a very minimalist set-up. The contribution of a tiny ringing cymbal that rested atop a big harness-slung bass drum was quite crucial. Out front, the trumpets made coordinated flourishes, and the chief soloing horn was an alto saxophone, striated with reverb, way beyond the already spacious natural sound of the hall. This fared surprisingly well, as nothing could halt or impair the rapid percussive attack of the involved soloing constructions, always seeking to perch on a higher and higher rafter.

In the end, the Romanians took a rather flat beginning, herding their lost audience towards the front rows, goading them into standing, then even coaxing a few females up onstage for a brass-worshipping dance. The second set took off into another dimension, populated by some of the best songs, and featuring the most riveting solos. There was one tune that employed a dual lead vocal technique, but many more that swapped the vocal roles around, from frontman to sideline helpers. Then, for the encore, the band paraded around the hall, and out into the foyer, with not one tune but three or four, offering up a substantial long goodbye, including that evocative theme from Emir Kusturica's Time Of The Gypsies movie, the traditional "Ederlezi." This wasn't exactly their natural habitat, but the Romanians managed to invade, colonise and convert into a designated party zone.

This Coventry gig was the Saturday night climax of a two-day Synthcurious mini-festival which featured an afternoon of films, discussion and electronics activism. Wrangler have a low profile considering the pedigree of the trio's players. Not least Stephen Mallinder, a founder of Sheffield's Cabaret Voltaire, one of the most significant UK alternative industrial-funk electronic music outfits. He's partnered by Phil Winter, from Tuung, those pioneers of folktronica, and Benge, who's played with original Ultravox singer John Foxx. The opening set came courtesy of Attrition, a local Coventry act that's been active almost as long as the Cabs. Nowadays, Attrition is mostly Martin Bowes, no longer working with co-founder Julia Niblock. The set was much better than expected, as Attrition's sound is now stripped to a darkened core, shorn of its old Gothic trappings. Bowes has scalpeled the palette down to a harder, minimalist anti-glam doom-pop, loaded with attractive amounts of alienation.

By comparison, Wrangler shrouded themselves in a mystery aura, performing in near-darkness. Even though this trio are sonically equal, Mallinder couldn't help being the focus, not least due to his vocal role, but also by standing in the centre, projecting a covert leader-vibe. Considering their fully pulsing and blipping sound array, Wrangler didn't have much equipment on view, everything kept to small boxes of electronics, seeming very hands-on. Benge hit two small sample-triggering drumheads, very starkly set up on a pair of thin stalks. The songs built up a similar scope of activity, commercial in intent, but subliminally glistening with a moody hue. Both audience and band became immersed and ensnared during this communion, with flickering images providing part of the atmosphere, hypnosis insinuating to every corner of the room, an encore blast from the past provided by "Sensoria," a slithery old funk classic from Cabaret Voltaire themselves.