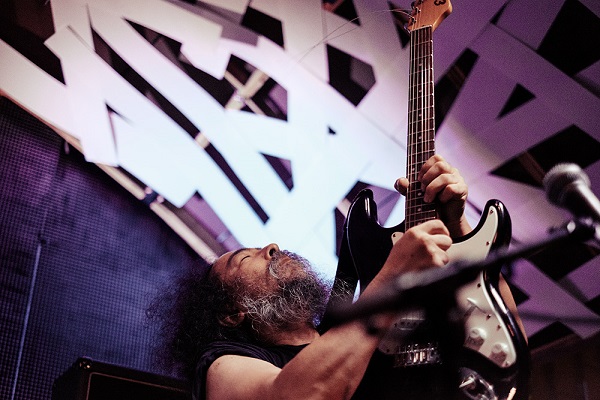 Acid Mothers Temple can be creatures of habit. In several cities, they often return to the same venue each time they tour. Also, their highly specific orientation towards extreme freak-out psychedelia has the effect of assuring an audience that certain exotic and abandoned Japanese goods will be delivered. For their Birmingham show, both of these promises are fulfilled, but there is another element arriving, a factor of profound surprise. Maybe it's the presence of newer, younger bass and drum members, or maybe just a spontaneous hallucinogenic combustion, but this set swings open its portals to the possibility of funk, and even disco, pulsating underneath the expected guitar eruptions and synthesiser ruptures. This is most strikingly apparent during "Pink Lady Lemonade," the tune that absolutely always appears right at the heart of each AMT performance. Usually, it will build up slowly around a repeating guitar spangle, gaining pace and density over its epic length. This time around, all of this still happened, but over a steadily intensifying disco bounce. This was no dilution, and didn't interfere with leading guitarist Kawabata Makoto ascending to his accustomed pinnacle of sonic revelation, but it did have the advantage of insinuating an unfamiliar aspect of uncompromising glitterball celebration to the tripped-out vision.

The AMT set-list has also undergone quite radical change, with a clutch of unfamiliar numbers, mostly infused with the funk, even if persistently dislodged by Higashi Hiroshi's untamed electronics. As a shocking contrast, he gets completely rustic, blowing harmonica in a sparse space-blues ritual stretch, a midway detour that acts as a volume-pause before the Makoto guitar escalations resume. Besides the orgiastic core psychedelics, the AMT have always provided excursions into folkloric weirdness, cosmic whispering, blues rollin' and, now, disco-funk, all the better to strengthen the power of the freak-out, when it inevitably rears up once again. This was one of the AMT's more unhinged, and primally sustained journeys...

The long-running B.E.A.S.T. organisation (Birmingham ElectroAcoustic Sound Theatre), and its massive multi- speaker array, have found a relatively new home up on the top floor of the Bramall Music Building at the University Of Birmingham. Up in the dome, they are running a series of concerts that display some of the best electroacoustic works in the UK, and often beyond. A hundred speakers might be B.E.A.S.T.'s upper limit, being one of the globe's largest sound systems, even if many of those boxes might be quite tiny. There are always the bulging, floor-squatting bass bins, though, to handle the stomach-churning depths. Music might be sculpted by sound processing dissection, inside a laptop, but when it leaps out into the outside world, a skilled diffuser is always a boon, guiding every element into its ideal speaker, and space, within the spherical sound-stage.

As ever, there were several pieces by established composers, the programme completed by new student work. As some of the students are already busily constructing their own career profiles, the line between these stages can often be smeared. There's something about the top floor's circular dome-construction that's especially conducive to speaker placement, corners banished up above, with small speakers suspended around the actual domed ceiling. This particular sequence was titled Emergence, allowing a broad definition of that concept to be explored via its six works.

ADVERTISEMENT
Old hand Adrian Moore bookended the first half with a pair of his "Sea Of Singularity" pieces, establishing a platform for sonics more restrained and environmentally contemplative than is frequently the case. A notable composition from the first half was "a<<<>>>b," by Christopher Haworth, who chose to face the audience from a conventional stage position, rather than diffusing from the centrally-positioned mixing desk. His initial approach was to pluck away at isolated flecks, gradually increasing their density, but eventually working up to an increasingly full blanket of thoughtfully-sculpted noise. His curve of activity increase was particularly well-choreographed, building up to a brutal finish. The evening's star composer was veteran player Denis Smalley, presenting an extended piece that had only just been premiered in May of this year, celebrating his 70th birthday. Here, the development of "Fabrezan Preludes" was much more gradual, preferring to avoid a predictable explosion of activity. The three sections possessed a soothing sense of slow growth, spreading multiple layers of soft clouding throughout the dome. Generally, this was an opportunity to hear electroacoustic music in its less theatrical, more introverted manifestation.

Thijs VanLeer is one of rock music's most individual characters. The flute and Hammond organ are his chosen weapons, those two not normally being paired by a single being. He also retains a somewhat bizarre high- yodelling extremity to his vocals, even at the advanced age of 68. These disparate elements are at the service of one of progressive rock's most quirksome outfits. Leer is clearly growing out of jazz and blues, mangling those foundations up via rock classicism, and even inbreeding with a younger generation of punkier inspiration in the form of lead guitarist Menno Gootjes, who has completely immersed himself in the band since 2011. One of the triumphs of this outifit is that besides the expected delivery of classic compositions, stretching right back to their 1969 formation, Focus are also adept at penning new material which avoids the common pitfalls of most bands who have received their greatest attention in their early years. Leer's fresh sounds resound with a spiky excitement, crouching tensely beside the old works, attacking with a complex prog-punk aggression. Leers also slips in a prominent degree of buffoonery, as relief from all of the virtuoso density, even letting loose with some straight-ahead 1960s-style bluesy choogling. The invention is sustained over an epic set-length, not least during the sprawling multi-mood suite of "Eruption," from their second album, way back in 1971.