By DOUG COLLETTE
March 5, 2011
Sign in to view read count 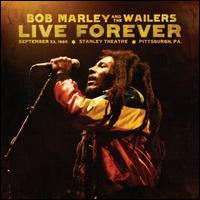 Like Miles Davis and Jimi Hendrix, Bob Marley is one of those rare musical figures who achieved mythic status during his own lifetime. The Jamaican reggae master's legacy has grown posthumously— due, in large measure, to the astute archiving of his recordings. Live Forever documents his final performance.

At the time of this September, 1980 show at Pittsburgh's Stanley Theatre, Marley was less than a year from his death due to cancer, so the invocation of his Rastafarian faith, with which he greets his audience, is eerily defiant. And if Marley is any less overtly zealous here, on songs like "Natural Mystic" and "Burnin' Lootin,'" than during the previously released Live! (Island 1975), his relatively subdued, wizened stance has as much to do with other battles besides his health, specifically. the 1976 assassination attempt that rendered him an exile in London for an extended period.

It was only natural to change the billing for The Wailers, upon the departure of founders Bunny Wailer and Peter Tosh in 1974, if only to give Marley's name proper precedence as chief songwriter for the group, as well as its evolving visionary: Here, "Them Belly Full" and "The Heathen" sound as politically and socially shrewd as Bob Dylan's culturally momentous songs, but Live Forever is also testament to the band's growth in numbers and expertise.

The Wailers as a sextet deserved more attention than just as a mere backup group. Sly Dunbar and Robbie Shakespeare may have been the only reggae rhythm section comparable to siblings Ashton "Family Man" Barrett on bass and Carlton Barrett on drums, while the dual keyboards of Earl Wya Lindo and Tyrone Downie inserted as much contemporary color into the sound as guitarists Junior Marvin and Al Anderson.

None of those four get much more room to solo on "Crazy Baldhead" than percussionist Alvin Seeco Patterson, but the integrity of the unit maintains and extends the atmosphere conjured by Marley, so that even the most conventional compositions, like "Could You Be Loved," sound of a piece with the evangelism of "Redemption Song." Meanwhile, the I-Threes vocals, especially on "No Woman No Cry," recall the soul and R&B roots of reggae.

The deceptively colorful graphics that adorn this double-disc set (there is also a collector's edition including a book and vinyl) are perfectly appropriate to the enclosed music, the sound in turns portentous ("War"/"No More Trouble") and perfectly joyous ("Get Up Stand Up"). The clarity and resonance that disappears from the band's own soundboard recording, to be replaced by a secondary audio source near the end of the show, sounds like nothing so much as Bob Marley singing from the beyond—a palpably spooky coincidence, reinforced by Patricia Meschino's essay, recounting of the sequence of events leading to this musically and culturally significant event.

CD1: Greetings; Natural Mystic; Positive Vibration; Burnin' and Lootin'; Them Belly Full; The Heathen; Running Away; Crazy Baldhead; War/No More Trouble; Zimbabwe; Zion Train; No Woman, No Cry. CD2: Jamming; Exodus; Redemption Song; Coming in from the Cold; Could You Be Loved; Is This Love; Work; Get Up Stand Up.