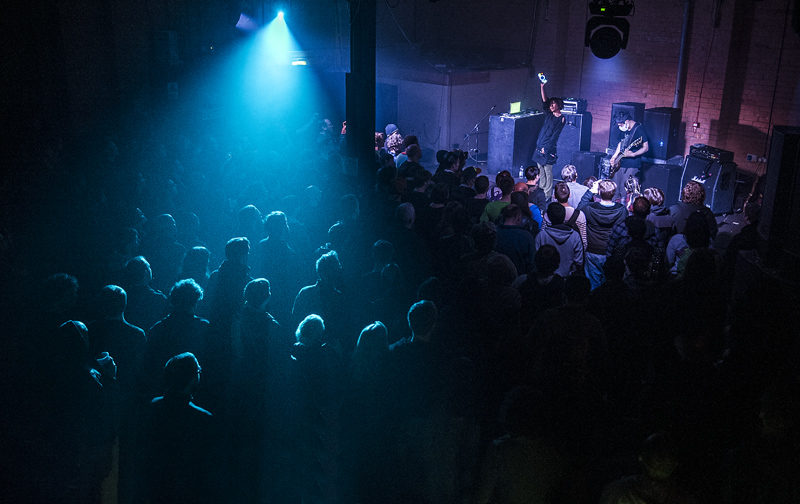 The Irish duo Tir Na Nóg should be applauded for its longevity in addition to its ability to keep the music vital, exuding an aura of in-the-moment spontaneity. The wonderfully intimate Kitchen Garden Café, in the Birmingham suburb of Kings Heath, was the ideal venue for the pair's relaxed, mood-bathed explorations. This was apparently their fifth appearance here, in this home of global roots music.

Singer-guitarists Sonny Condell and Leo O'Kelly first began collaborating in 1969, so their individual form of folksong was infused with subtle suggestions of psychedelic and progressive rock elements. They were concerned with penning original material, developing a very personal style. Their first wave of classic albums on the Chrysalis label arrived in the early 1970s, when they were also being recorded for session broadcasts on BBC radio, with DJ John Peel being a crucial supporter. The duo divided in 1974, but resumed playing together a decade later. Their name is taken from Irish mythology, meaning 'land of the young,' another name for the 'Otherworld.'

Turns were taken with handling lead vocals, harmonies shifting in ascendancy. The twosome both played acoustic guitars, but these were gently amplified and fed through a small clump of effects pedals. Both players caught samples for repetition, but O'Kelly was particularly involved in crafting layers and adding carefully restrained electronic beats to some of the songs. "Venezuela" was a notable beneficiary of this build-up. O'Kelly also took up the fiddle for around a quarter of the tunes, positioning it in the crook of his arm. Condell regularly slapped a North African goblet drum, then twanged a jaw harp on one ditty. The rapport between the two took on the feel of an after-hours jam session, but tightly was organized in its looseness. Their own songs possessed a unique tone, but there were a trio of impressive cover versions: Nick Drake's "Free Ride," which appeared on their third album, an incongruously acidic Bob Dylan number, "Love Sick," and a tune from the Silver Apples, that old alternative electronic duo. This last song, "I Have Known Love," was a representative from Tir Na Nóg's latest vinyl EP, which they proceeded to play in its entirety, making the complete collector's item sound well worth grabbing. Contents include "Picking Up Birds At Funerals" and "The Angelus." The always-included "Daisy Lady" ended up being one of the encore numbers, because they'd forgotten to play it earlier. Tir Na Nóg captivated its select audience, entrancing them with a special kind of warping and wefting of folklore, the open tradition woven into the inner personal.

Here's another twosome, although Melt-Banana used to be a full four-piece combo. Even so, these Tokyo denizens now create a competitively wall-of-sound barrage, regardless of being a cut-price incarnation since 2012. Technology now makes it easier for drums and electronics to be controlled manually via the use of a handheld device, which singer Yasuko Onuki brandished like she was conducting an imaginary orchestra. Linked to a laptop, the mini-console appeared to allow triggering of drum-rush solo stutters, providing an element of personal control, rather than just letting the computer files roll on, inviolate. It also gave Onuki something to flourish, raising her arm or flailing in a circular motion, responding to overloaded guitarist Ichirou Agata. These are the founding members, together for just over two decades. Their rapport is innate.

The live drums and bass weren't particularly missed, with today's sophisticated speaker systems working to provide full aggressive sonic slamming. This approach could be risky in a venue with a primitive sound setup or a substandard mixer, but on this evening all was triumphantly crystalline, powerfully arrayed. The songs were typically concise, rammed with speed-thrust, negotiating complicated rhythm patterns, and demanding superior rehearsal capacities. If most of the numbers were brief, there were even more fleeting pleasures awaiting, as Onuki heralded a mini-set of eight short songs. When she says short, she means short, with most of them being well under 30 seconds in length, like curt micro-symphonies. Then, as a contrast, the climax-run involved some extended guitar blistering, with vocals suspended in favor of electronic texturing. Melt-Banana has always given equal attention to guitars and electronics, melding the two with a complete absence of prejudice. Shockingly, they included a cover version as an encore, interpreting the Louis Armstrong chestnut "What A Wonderful World." Onuki managed to retain the song's melody, even at great velocity, tobogganing over Agata's guitar avalanche. Her vocals are blessed with an agility that matches his every extreme guitar slalom.

Around two-thirds of the way into their first UK tour together, Toumani Diabate and his son Sidiki had been given ample time to develop a performing rapport, not that such a thing wasn't already in place for the recording of this Malian kora duo's recent debut album. Warwick Arts Centre is actually just outside Coventry, which is just over 20 minutes on the London train from Birmingham. The theatre is WAC's medium-sized space, and it was well on the way to being filled, its audience hushed for the initial entrance of Sidiki, who played a solo introductory passage. Before too long, Toumani glided onto the stage, picking up his own kora, which was set at a lower level than Sidiki's, the son preferring a higher stand and stool as a playing position. It was anticipated that witnessing the pair playing live would assist in unravelling the complex interlacing of their lines (the koras are literally strung with fishing line!), but nothing is so simple, as their elaborate phrases are intimately intertwined in a constantly shifting ascendancy. Solos aren't so easy to pick out, as each piece is akin to an extended meshing of individual voices, working across each other, behind, around and inside.

Fortunately, the crowd were perfectly attuned to the music's elaborate unwinding, settling into a calmed, meditative concentration. The lighting was at a gloaming level, creating conditions that might have induced sleep in a weary punter. Even if the listeners found themselves drifting in and out of focus, this was no bad state, as 90 minutes seemed subjectively like 45, a sure sign that the music was working its spell. Shortly before set's end, Sidiki shifted a microphone closer, and started to sing, softly, casually, as if spontaneously. It was a secret means of altering the atmosphere, right at the close. Many other performances, hanging onto a single-minded mood, might have courted tedium, but this gig left the audience believing that it could have been short-changed under the rules of the European clock. In reality, it was an epic journey of acoustic wonderment, subjectively fleeting due to its magical properties.