By Jim Santella
September 21, 2005
Sign in to view read count 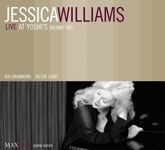 Jessica Williams never lets her audience down. This second volume of live performances at Yoshi's in Oakland, California provides yet another example of her creative muse in action. With her piano trio, the artist sculpts each selection as if it were made out of sand. Gently prodding, she finds a solution that's satisfying as well as intellectually fulfilling. Volume 102 would probably be just as creative, since she seems to never be at a loss for musical words and phrases.

Last year's Volume One earned a top rating for its superior qualities and was selected by this writer as the best jazz album of the year. Volume Two follows with the same spirit and the same highly recommended result.

"Summertime" and "Flamenco Sketches" bookend the album with deeply felt ballad interpretations that reach into your soul. Williams expresses the feeling with perfection, and her musical partners enhance the mood with just the right inflection.

"Lulu's Back in Town" rollicks with a barrelhouse demeanor that relates the relevant role that the piano has played in history. Before vinyl, before tapes, before CDs, the piano brought joy to hard-working folks all over the world. It still does.

Sonny Rollins' "Paul's Pal" gives the trio plenty of room to stroll. Here, Williams relaxes with the straight-ahead mood that has carried jazz from city streets, public parks, and bordellos to movie theaters, grand auditoriums, and devoted clubs such as Yoshi's. With walking bass, ride cymbal, and cohesive interplay, the trio finds fruition. Williams interprets each selection with a crystal-clear understanding of what moves us.