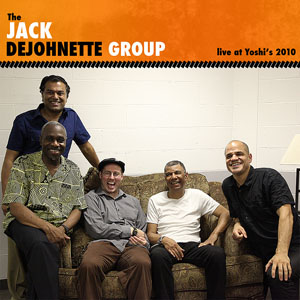 In the text file accompanying his digital download-only Live at Yoshi's 2010, Jack DeJohnette is quoted, ..."Each piece is different every time we play it." Fans of this veteran drummer—for whom a precise count of all the artists he's worked with (let alone all the recordings he's appeared on) would be an exercise in futility—would have to agree. DeJohnette's quintet— which made a stop at the well-known Oakland club during a summer tour in 2010—opens with a 21-minute version of "One for Eric," completely reimagining a song that, since first appearing on the drummer's Special Edition (ECM, 1980), has become a regular part of the DeJohnette songbook, later revisited on Audio Visualscapes (Impulse!, 1988).

Shifting its theme from a burlesque bump and grind, driven by guitarist David Fiuczynski's overdriven, bluesy stance, to frenetic double-time, it's all just a setup, ultimately, for a foray into freer territory, where alto saxophonist Rudresh Mahanthappa solos with characteristic reckless abandon, bolstered by keyboardist George Colligan's synth washes and jagged electric piano voicings. Fiuczynski solos with similarly unfettered invention— even resorting to slide guitar, at times—though the backdrop is less chaotic, with DeJohnette and electric bassist Jerome Harris locking into lithely swinging support as the guitarist ups the attacks with visceral whammy bar bends, gradually ratcheting up the grit and grease.

It's not the only DeJohnette original this group revisits; all five of Live at Yoshi's 2010's tracks have seen prior release, going as far back as his second album with the collaborative Gateway trio, Gateway 2 (ECM, 1977), and as recently as the drummer's own 2009 trio date, Music We Are (Golden Beams). Colligan proides a soft synth cushion for Fiuczynski, whose clean-toned guitar meshes almost seamlessly with Mahanthappa's alto on the laidback "Blue," but the focal point of the song is Harris, whose bass solo—meshing swinging Steve Swallow-esque guitarisms with a more blues-centric disposition—raises serious question as to why he remains such a largely hidden gem.

In this live context, DeJohnette's group takes plenty of opportunity to stretch out against the briefer original versions. The in-demand Colligan—who, like Harris and Fiuczynski, remains a largely (and unjustly) unsung hero—delivers a lengthy solo piano intro to "Soulful Ballad" that, on this largely rubato tone poem also featuring DeJohnette on melodeon, is a compelling blend of harmonic development and pointillistic lyricism. Stretching the Middle-Eastern slant of "Tango Africaine" in an a capella intro that combines fretless guitar microtonality with delay and looping, Fiuczynski delivers an understated set high point before the group enters, its gradually intensifying groove leading to another highlight in Mahanthappa's searing, far-reaching solo.

DeJohnette's tone, time and masterful construction of rhythmic constructs— as polyrhythmically complex as it gets or as simple and perfect as a single ride cymbal—push-and-pull his band mates throughout Live at Yoshi's 2010. He may only take one solo (on "One for Eric"), but DeJohnette's signature is all over an exhilarating set that, for 65 minutes, is the next best thing to having been there.