By GREG CAMPHIRE
October 31, 2008
Sign in to view read count 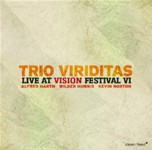 "Wind at the ear says June" launches the performance, as the trio swings in and out of different pockets, alternating between groove and pure texture. Harth's antics on pocket trumpet recall Lester Bowie's arch humor, while Norton's bass drum is tuned to perfection to create a welcome center of gravity. The tune eventually deconstructs into an aura of vocal cries, bowed bass, and shimmering scraped cymbal bells, offering a warped sense of both dread and absurdity.

Harth is pretty sensational throughout the set, erupting outside his mouthpiece at times with vocalized yet nonverbal testifying, like a preacher with his tongue tied by the presence of a spiritual possession. Norton is a huge asset to the group, a virtuoso on the traps as well as vibraphone. And the late Morris plays like a grand master, with a huge tone earned from bandstand experience with Pharaoh Sanders, Horace Tapscott, and David Murray among others; he is sorely missed from the scene. Together, the band's chemistry lights a spark that keeps even their most free playing linked by deep communication and trust.

Occasionally, when the trio veers into complete energy meltdowns recalling late-period John Coltrane, it can become a bit hysterical and wearisome, but only momentarily. The three musicians have their listening instincts sharpened, always creating logical yet surprising conclusions to what they played before. In this way, Trio Viriditas mines similar territory to earlier artists such as Air or Sam Rivers' various trios over the years.

On "Melancholy," the three set a mood befitting the tune's name and utilize a refreshing lineup of sax, bass, and vibes. The tune manages to approach late-night, Miles Davis ballad territory, as well as the primordial wail of Albert Ayler's pre-bop sensibility. Other highlights from Live at Vision Festival VI include the tasty modal swinger "A wind reads ruts saluting the blue silk beyond pain," the ambient and contemplative "Braggadocio," and the Monk-like playfulness and mystery of "Fuer die Katz's deli(ght)+Starbucks."

But the true gem of the set is Trio Viriditas's gorgeous, album-ending rendition of Horace Silver's "Peace," again with the unique sax/bass/vibes instrumentation. The players honor the piano master's original ballad melody with a tasteful interpretation, while also singing their own song. And after all, isn't that what jazz is all about?