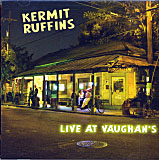 Trumpeter/vocalist Kermit Ruffins sure knows how to throw a party, and frankly, he should. As the founder of two great New Orleans jazz bands, the Rebirth Brass Band and the Barbeque Swingers, Ruffins has become somewhat of a New Orleans musical diplomat, embracing a vigorous touring schedule that has brought him further from home than many of the city's mainstays.

Live at Vaughan's is a different story though, as Ruffins brings his Barbeque Swingers back home for a Thursday night set. The full house is in all-out party mode, and Ruffins delivers with his brand of modern New Orleans jazz, complete with to-the-point soloing, heartfelt vocals, and endless musings. If Ruffins knows how to do anything, he knows how to put on a show.

After a brief introduction, things kick off with the infectious opener "Skokiaan." After his trumpet trilling over his rock-steady backing band, Ruffins enters vocally with an extended howl before voicing the rollicking lyrics. His voice, though far from exceptional, does have a certain energy and spirit to it.

Ruffins slows it down for the next number, Harold Arlen and Ted Koehler's classic "World on a String." His rendition is an honest one, and it only heats up when Richard Knox tickles the electric ivories in fine fashion. The night soon turns into a family affair, as Ruffins brings in his daughter Neshia to sing on "Do You Know What It Means to Miss New Orleans?"

One of the great things about Ruffins, and something that really shines through on this disc in particular, is his broad range of influences. He brings the same care and passion to an old Arlen ballad as he does to Sly Stone's "If You Want Me to Stay," a masterpiece of over-the-deep-end funk. His covers never lose Ruffins' own touch, though, and he brings a completely different kind of energy to the song. The opening two-minute jam on the unmistakable bass line is pure fire, and it's clear the band has really hit their stride. Again, his voice doesn't come close to matching Stone's, but his energy is enough to carry it. He even mixes in a few lines from hip-hop staple the Roots's "You Got Me," for Ruffins is a man who embraces all forms of music. These small details are part of what makes Live at Vaughan's such a fun ride.

The album closer only certifies Ruffins' role as a musical unifier. The Five Stairsteps' ballad "O-o-h Child" is presented with a funky edge before Ruffins begins rapping over the song's chord changes. For Ruffins, it isn't about playing a style of music; it's about just playing so that people can enjoy themselves. When Ruffins asks the non-New Orleans residents in the audience to scream, he is met with a wall of noise. Looks like it's working.

Introduction; Skokiaan; World on a String; Drop Me Off In New Orleans; Do You Know What It Means to Miss New Orleans?; Palm Court Strut; Treme' Second Line; Can't Take My Baby Nowhere; Hide the Reefer; If You Want Me To Stay; Be Thankful For What You Got; Talking Loud and Saying Nothing; O-o-h Child.