Hall & Oates: Live at the Troubadour

By MIKE PERCIACCANTE
December 24, 2008
Sign in to view read count 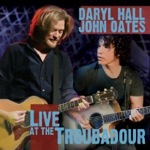 What do you do when you've been releasing albums, CDs, videos and DVDs for almost forty years—and your last release featuring new material was five years ago? Well, there are three choices. There's the Santana route, where one works with all of the hottest new acts on a duets/collaborative disc. Or you can get on the hotline to Rick Rubin and/or Clive Davis and beg for their help in producing a blockbuster CD. Or you can take the route that Daryl Hall & John Oates thankfully took, going back to their roots while, at the same time, revisiting their greatest triumphs.

In the '80s Hall & Oates sold albums at a rate similar to that of Madonna, Prince and Michael Jackson. Their song catalog filled jukeboxes across the country with their classic blue-eyed soul/funk pop, including a seemingly endless string of hits such as "Private Eyes," "Maneater" and "Kiss On My List." With popular musical tastes shifting to grunge in the '90s and their new releases since Do It For Love (U-Watch, 2003) either being live recordings, cover albums or a Christmas collection, the best selling duo of all-time decided to record a live performance at Los Angeles' famed Troubadour thirty-five years after they last performed there as an opening act.

Live At The Troubadour may be the best Hall & Oates greatest hits collection ever released. It is, however, more than that. The three-disc live set ( two CDs and a DVD) becomes more passionate and exciting as the show progresses. This concert finds the duo and their band in fine form. They present their back catalog in a way that removes all of the '80s-styled bombastic production and really brings the nineteen songs back to their genesis. By stripping the music back to acoustic arrangements the songs can be heard in all their glory as they were originally conceived.

The set is highlighted by "Sara Smile," an older track that was their first Top 10 single back in 1976, the bouncy nine minute version "I Can't Go For That (No Can Do)," "You Make My Dreams," which remains vibrant and poppy regardless of its arrangement, "Had I Known You Better Then," a melodic ballad on which Oates took over on lead vocals, the energetic "Private Eyes" and "Out Of Touch," their last song to reach #1 on the Billboard Top 100 (from 1984). Though virtually every song is a certified huge hit, the scaled down, unplugged acoustic arrangements and slightly different instrumentation give them a fresh new perspective.

The DVD contains each of the tracks found on the two CDs as well as two bonus interviews—one with Hall, and the other with Oates. In the interviews they discuss how they started their career, appearing at The Troubadour, and how their careers and lives have progressed since the early days. The DVD is shot in an extremely intimate manner. Multiple cameras and angles provide strong close-ups as well as beautiful transitions. The Dolby Digital 5.1 sound is pristine and the picture is crystal clear and immaculate. The collection is also available solely on DVD and Blu-Ray.