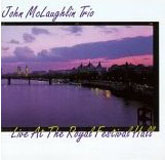 Four long years had passed since McLaughlin's last record when JMT released Live at the Royal Festival Hall in 1990. The brilliant percussionist Trilok Gurtu, of Oregon fame, joined him—along with superb bassist Kai Eckhardt—to form an exciting band which was to exist in one form or another (with revolving bassists) for five more years. The mostly acoustic music which fills this album, augmented by electric bass and John's guitar synthesizer, is a mix of standard jazz, fusion and Indian-influenced rhythms and melody lines. The rhythms do tend to overwhelm the compositions, but to a degree that represents the signature mark of this particular band. That fact could also be because McLaughlin was making a comeback from a potentially career-threatening injury to his index finger, and thus found rhythmic playing easier to handle than extensive soloing. At any rate, the structure of the Trio is such that rhythm assumes as much of a role in the compositions as melodic themes. This unusual personality leads to many exciting and good-humored musical excursions. This band is fun to listen to because its members are clearly enjoying themselves.

A raucous crowd involves itself from the opening moments of "Blue In Green," to the percussive volcano "Mother Tongues," to the swinging "Blues for L.W". (Just a note about "Blues for L(ech) W(alesa)": this was one of the rare tunes that McLaughlin continually played over the years in all his different bands. In fact, he may have played it too much. This is its best performance on record, however).

Gurtu mesmerizes during an absolutely brilliant percussion break on "Mother Tongues." The resourceful player finds the center of the beat on every conceivable device, even endowing a bucket of water with melodic and rhythmic importance!

Several moments of musical hilarity ensue during the course of the concert, making it a worthwhile recording even if you don't entirely dig the style. The trio became stronger when Dominique DiPiazza replaced Eckhardt a year later (as on Que Alegria ), but you shouldn't kick this recording out of bed.