By JEFF DAYTON-JOHNSON
April 23, 2006
Sign in to view read count 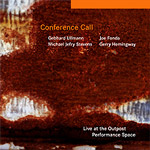 This November, 2003 Albuquerque date by Conference Call manages to produce (very satisfying) new variations on an old formula. The quartet, which sits comfortably somewhere between the hard outer edges of the mainstream and free improvisation, includes multiple reeds player Gebhard Ullmann and the leaders of the Fonda/Stevens Group. The drummer's chair has been subject to a non-lethal version of the Spinal Tap syndrome, occupied by a sequence of percussionists including Matt Wilson, George Schuller and Han Bennink; this time round, Gerry Hemingway takes the chair.

The new guy sounds great. A few minutes into the first track, "29 Shoes (what would one do with an odd number of shoes?), he produces the sound Jack DeJohnette was seeking but failed to achieve on the Miles Davis Cellar Door set: muscular and funky, but also open and polyrhythmic. His complicity with bassist Joe Fonda is delightful and structurally critical, given that each number is a progression of episodes demarcated by the rhythmic signature Fonda and Hemingway provide.

Ullmann is all energy and ideas: he plays soprano, alto (I think) and tenor saxophones, as well as bass clarinet, sounding a like a different musician on each, and all of his solos are long and dense. Pianist Michael Jefry Stevens can provide pianissimo accents but also raises the volume with Messiaen-like splendor in the magnificent opening minutes of "Liquid Cage.

The set is framed by two relatively loud, mostly up-tempo numbers; in between are three frequently quiet forays into the free. "Mala Dr'ole in particular may be the least accessible but also the most successful cut. Over its course, the band works out all the inexorable consequences of the fading out of the initial blast of the angular, Anthony Braxton-like theme. "As I Wait, the closer, opens mysteriously and gives way to a hard, soulful motif, and Hemingway again calls upon his exhilarating high-volume skills.

Why does this music sound so contemporary given that the musical innovations upon which it draws were established forty years ago? In part it's because of the context: stodgy mainstream jazz is busy working out even older musical innovations. But it's also fresh because Conference Call mixes these sonic elements—beautiful harmonies one minute, free squeaks the next—in an unapologetically ahistorical pastiche that few of the quartet's precursors would have allowed themselves. You get Pharaoh Sanders and Roscoe Mitchell playing together, Yvonne Loriod trading piano parts with Randy Weston.

In that sense, the group's truest progenitor might be Archie Shepp (whom, incidentally, Ullmann resembles when he plays tenor). Like him, Conference Call seems to want to straddle both the freest outer reaches and the center of the jazz tradition. It's a combination that works to great effect on Live at the Outpost.