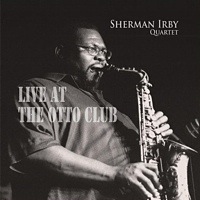 Live At The Otto Club is Sherman Irby's first live album with his quartet, and it would be hard to conjure up a more joyful example of seriously swinging jazz that sounds like a great lost classic from the heyday of hard bop. Though the liner notes seem to suggest that this was a bit of a pick-up quartet, it doesn't sound like it: the group, particularly Green on drums and Menci on piano, swing as one with Irby as he leads them through a rollicking set list of classics, plus one lovely original, the bossa Irby wrote for his wife, Laura.

Irby's work with such luminaries as Roy Hargrove (whose "Depth" gets a spirited workout here), Wynton Marsalis, and the Jazz at Lincoln Center Ensemble has honed his tone and talent to a razor sharp edge. The architecture of his lengthy series of choruses on the classic "Bohemia After Dark" is exquisite, a slow build to a screaming ending that has the crowd shouting "Bravo!," with many memorable phrases along the way. Green is also fantastic on this tune, providing a variety of textures, always swinging mightily, underneath Menci's superb solo. John Coltrane's "Countdown" is a stunner. Irby starts off solo, sounding a bit like Anthony Braxton, and then Green enters for some delightfully free dialogue that recall 'Trane's duets with Rashied Ali as much as the relatively tame take on Giant Steps. By the time the rest of the quartet enters, Irby is already moving toward a steaming climax.

Most surprising is what Irby does with Miles Davis's "Four." Rather than the standard upbeat reading, Irby recasts the classic as a tender ballad, so successfully that it might take the listener a moment or two to recognize the tune. Bassist Marzola gets a solo turn during the lengthy reading, though he's not particularly scintillating here. Fortunately, the record ends on a high note, with a playful run through Thelonious Monk's "In Walked Bud," incorporating a much better spot for Marzola and some storming traded eights between the leader and the exciting Green. If the music weren't enough, the old-school flavor of the date is upheld by the recording, which was done with a single stereo microphone into a simple digital recorder, giving a clear feel of the ambience of the Otto Club. On the evidence laid down here, Sherman Irby is one of our top alto players and well worth the price of admission if he's headed to your town. Until then, Live At The Otto Club should do nicely.