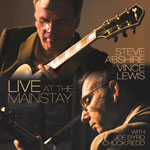 Listeners who are already familiar with guitarists Steve Abshire and Vince Lewis' first release, Two In The Pocket, will be pleased to know that Live at the Mainstay is an even stronger recording, with the addition of the fine rhythm section of bassist Joe Byrd and drummer Chuck Redd. This is a subtle quartet which often plays with an intuitive flair for interaction.

Abshire and Lewis are even more attuned to each other than on their notable first release, which is a casual way of saying a lot. After listening to the recording a couple of times, an interesting approach is to listen through again, specifically following how Abshire accompanies Lewis and how Lewis accompanies Abshire. Both are accomplished soloists, but the elegant support they lend each other is a big part of the success of this release.

Throughout this recording, Chuck Redd is outstanding both as a soloist and as an accompanist. He demonstrates what a drummer with taste, intelligence, and an exquisite sense of touch can do with the intricate job of accompanying a two-guitar frontline. An understated Joe Byrd provides solid, swinging, traditional bass work which keeps this lively group in the groove. This rhythm section doesn't let up, playing at a level of sophistication that provides a good part of the pleasure of repeatedly listening to this performance.

Live at the Mainstay is mainstream jazz with a focus on standards; highlights include a swinging version of the bossa nova tune "Wave, a delicately intense version of "Body And Soul, and a bluesy saunter through "Willow Weep For Me. The sound quality of the recording is excellent. In short, Noteworthy Jazz is on a roll with another fine Abshire and Lewis disc. Hopefully, this quartet will be releasing a follow-up soon. Highly recommended.

Broadway; Just Friends; I'm Confessin'(That I Love You); Charade; Wave; Back Home (Again)in Indiana; Body and Soul; Willow Weep For Me; Taking A Chance On Love; Out Of Nowhere.