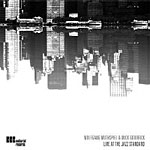 The worry, when two distinctive musicians play in a duo setting, is that one will display a heavy-handedness that brings down the combined feel. The urge to fill in the openness is ever-tempting. Luckily, both Wolfgang Muthspiel and Mick Goodrick are not only talented guitarists, but well-schooled in the art of supporting others musically, while maintaining their own creative voices. Live at the Jazz Standard is a textbook case of how to combine talents in creating a unified musical landscape.

Goodrick's playing is legendary and his teaching influential. His 40-plus-year career has found him partnering with the likes of Gary Burton, Pat Metheny, Charlie Haden, John Scofield, and John Abercrombie, to name just a few. The younger Muthspiel, a classically trained musician and Austrian native, originally sent a recording to Goodrick in hopes of studying with him. Goodrick assisted Muthspiel's transition, and eventually the two began performing together.

It would be easy, then, for Goodrick's guitar to dominate, but Muthspiel is on equal footing here. This is truly a duo performance as both guitars launch into a give-and-take of support and improvisation that creates a melodic richness throughout.

The album contains a mix of standards and originals, and shifts between more straightforward arrangements and extended explorations. The playing of each artist is precise but fluid and neither loses his melodic edge. Some of these tunes have been played thousands of times and yet each track sounds fresh and innovative.

In addition to the creative arrangements, what stands out is the way the tunes seem to build naturally from the improvisations of each guitarist. That tension adds to the groove instead of overwhelming it.

For a live album, the recording quality is excellent, but also leads to the album's only disappointment. Although billed as a live performance, there is no crowd noise or room vibe. While this is great for the technical quality of the sound, it is a bit of a letdown for the overall feel. It would have been interesting to hear how the crowd reacted to the musical tension these two were creating.