Zach Brock and the Coffee Achievers: Live At The Jazz Factory 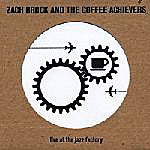 The relentlessly cooking and very original Live At The Jazz Factory is the third album from violinist Zach Brock's band, The Coffee Achievers, following their eponymous 2003 debut on Secret Fort and Chemistry (Secret Fort, 2005).

The violin in jazz, especially that of the mainstream, can't get no respect, despite Regina Carter's 2006 MacArthur Award. Brock wishes to remedy that situation, composing and playing jazz that is mainstream by default, only because it is not avant-garde. Indeed, Orbert Davis is quoted as saying that Brock is ..."not just a violinist who plays jazz, but a jazz musician who happens to play the violin."

This phrase signifies a player of a "secondary" instrument whose technique and attitude towards it defeats expectations. In Brock's case, his sound avoids the sharper edges of the normal violin sound, plus he has added a lower string that gives his violin a range down to that of the viola, darkening it even further.

While Brock plays the violin normally and what he does can be recognized as technically correct playing, it is his music that sets him apart. His compositions mix all kinds of genres from straight-ahead to rock, funk, blues, country and beyond. More importantly, the easily memorable tunes are arranged and performed by the band as extended dramatic stories and not merely head-solo(s)-head structures.

Live At The Jazz Factory is a killer set recorded in front of a very appreciative audience. Brock's band, which includes keyboardist Sam Barsh, bassist Matt Wigton and drummer Jon Deitemeyer, are as unified as can be, and play the stories with verve, energy and high spirits.

The rhythm section is important in these shifting works and Wigton and Deitemyer are very tight as they support Brock and Barsh, while driving the band through the rhythmic and metrical intricacies that the arrangements demand. Wigton, playing acoustic bass here, is also a dynamite electric bassist and lives and breathes this kind of music. He contributes "In Thoughts And Dreams," the final and longest track that moves through many rhythms and meters, bringing shouts from the crowd.

The set ranges in mood from poignant to explosive and is jazz of the highest order, with each tune taking the audience on an aural journey. Brock, although he is the leader, chooses not to dominate; rather, he is but one voice among many, and often drops out entirely as the rest of the band throbs and bubbles.

Live At The Jazz Factory will make a believer of those holding even the slightest prejudice against the violin that Brock is, indeed, a musician first and a violinist second, and that the Coffee Achievers can take down the house.

Now I Know; Resisting The Beast; (Leftover Stub from the) Wax Museum; Pugland; Almost Never Was; In Thoughts And Dreams.