Pete Christlieb with the Lori Mechem Quartet: Live at the Jazz Cave 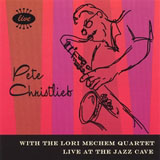 I fell head-over-heels in love with the tenor saxophone the first time I heard Zoot Sims play one, and my heart (thank goodness) has never quite recovered from the impact. These days I have two tenors of choice, one on each coast—Eric Alexander in the east, Pete Christlieb way out west. And the strange part is, about the only thing they have in common is that they both play the same horn. Alexander is a hard-line, straight-ahead, no-nonsense swinger from the Dexter Gordon/George Coleman (and Zoot Sims) school, whereas Christlieb dances nimbly and impulsively "on the edge, much like altoist Lee Konitz or the late Warne Marsh, and one seldom knows what avenue he may choose to explore or where the next phrase may lead him. Truth be told, Christlieb could play the phone book and make it sound intriguing.

Christlieb doesn't play the phone book at the Nashville Jazz Workshop's Jazz Cave, but he's all over the tenor, as usual, in an electrifying live performance with the remarkably adept and supportive Lori Mechem Quartet. While there's no doubt that Christlieb is the headliner, Mechem and her colleagues are there when he needs them, conveying the impression that this was a well-rehearsed gig instead of a hastily planned session, occasioned by Christlieb's brief stopover in Nashville in April 2006.

Mechem, in particular, is a real eye-opener. What a pianist with her singular talent is doing in Nashville is anyone's guess, but they're lucky to have her. She's not only an impressive soloist (who numbers among her influences Wynton Kelly, Oscar Peterson, Gene Harris, Monty Alexander, Erroll Garner and Bill Evans), but a vigilant and perceptive accompanist who always finds the proper notes to underscore precisely Christlieb's impromptu acrobatics. Bassist Roger Spencer, drummer Chris Brown and rhythm guitarist Andy Reiss round out a splendid group that is by no means eclipsed or overawed by its celebrated guest star.

The music chosen for the concert is for the most part well-known, consisting of half a dozen standards plus jazz evergreens by Evans ("Turn Out the Stars ) and Benny Carter ("When Lights Are Low, "Only Trust Your Heart"). Luckily, Christlieb is a peerless balladeer, as there are four on the menu, including the requisite encore, Ellington/Strayhorn's "Day Dream. The snappy flag-wavers are Jerome Kern/Oscar Hammerstein's "The Song Is You and Franz Lehar's sunny opener, "Yours Is My Heart Alone. Speaking of alone, Christlieb devises a breathtaking unaccompanied cadenza on "We'll Be Together Again.

In sum, this is a marvelous live performance, splendidly recorded with generous sixty-nine minute playing time. Don't be put off by the fact that Christlieb's companions are unknown; this is as sharp and stalwart a quintet as you are likely to encounter in New York City, Los Angeles, Chicago or anywhere else.

Yours Is My Heart Alone; Limehouse Blues; You