Ugetsu: Live At The Cellar 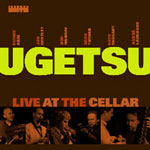 A band which names itself after an Art Blakey album wears its heart on its sleeve, or rather its jewel case. The instrumental lineup here is exactly the same as the Jazz Messengers edition that included Wayne Shorter and Curtis Fuller, and the programme is made up of originals plus lines from the likes of Shorter and Joe Henderson.

Happily, there is more to this music than the sort of clinical efficiency which often marks dedications where the weight of the past prevails over the spirit of the present. However, it has to be said that the group's reading of Shorter's "Backstage Sally" evokes the spirit of the Blakey band more than it projects the originality of the assembled musicians.

Once the temptation of comparison is overcome, however, it becomes clear that these musicians are on the way to establishing their own individual voices. This is especially true of tenor saxophonist Jon Bentley, whose unhurried way calls Clifford Jordan to mind. Trumpeter Brad Turner similarly calls to mind Lee Morgan, though what he lacks of Morgan's exuberance he makes up with his own personal brand of consideration. Throughout this disc he displays a knack for making every note count, and that in itself is something to admire. He does this on "Maybe Yes, Maybe No," an original from the pen of pianist Ross Taggart, whose "Open Book" purveys a mood similar to that of the work of Michel Legrand. Hopefully this will not be the last time it's recorded, as it deserves wide exposure.

The phenomenon of the composing drummer has never been exactly widespread, and in this case Bernie Arai's "Back At The Sugar Shack" conveys enough depth of character to belie its title. It also provides the springboard for the most effective solos on the disc, from Bentley and trombonist Rod Murray.

All in all, your opinion of this disc might be largely a matter of how you feel about Blakey's band in its prime and the hard bop idiom in general. This music is a lot more urbane in feel than anything Blue Note put out back in the day, but the character of the soloists tends to negate that feeling.