Charles McPherson: Live at the Cellar 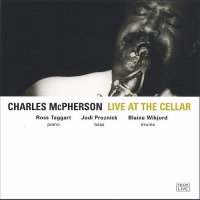 McPherson opens hard with Rodgers and Hart's "Spring Is Here." The native of Joplin, Miss. singes the ears with intense improvisation for five minutes, then hands it over for very compelling interplay between Taggart and Proznick before the tune eventually dissipates on the resonance of McPherson's horn.

The alto saxophonist's playing is demanding on drummers; fortunately veteran Vancouver player Wikjord lays down enough complexity to make an entire record of drum parts. As the interplay spreads, Taggart pops chord placements into areas where the drums are otherwise rolling, leaving a resulting work of sounds in perpetual transit.

Apparently, Dizzy Gillespie's "Blue & Boogie" left a medical legacy. Unconfirmed sources claim that band members plunged their heads into ice buckets post-set, as Proznick's hands were reported to have become an autonomous, collective blister and Taggart's piano needed its own treatment afterwards. Wikjord's sticks, meanwhile, perished in the blaze. Typically, McPherson was fine (something like, "Yeah, right on!").

Live at the Cellar tries to be as light in the back half as it tried to be heavy in the first half. In this context, it is hard to pull one's head out of the fire to feel the cool of Irving Berlin's "How Deep is the Ocean." "Manhattan Nocturne" continues to bring the collective pot to a low boil with some great rhythm work. The leader returns to the fore for "Star Eyes," and there is where we are brought full-circle. Can any audience navigate the musical expectations that such a complete reversal demands?

Bop fans can't escape the intensity of McPherson's work. Jazz fans should just try to smoke it. That's what the band did. Live at the Cellar lights it up!

Visit Cellar Jazz on the web.