By EYAL HAREUVENI
September 21, 2008
Sign in to view read count 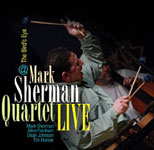 This two-disc live documentation of vibraphonist Mark Sherman's quartet captures a working band at its best. Beautifully recorded before an appreciative audience at the Bird's Eye club in Basel, Switzerland, the quartet delivers a very joyful presentation of their repertoire: Sherman's and pianist Allen Farnham's original compositions coupled with a selection of standards referencing the glorious days of bebop and post-bop, infused with articulate, personal playing and an urgent rhythmic energy. Sherman is accompanied by Farnham who, in this live setting, feels free to push the harmonic envelope of the band. Bassist Dean Johnson propels the rhythmic ideas of his band-mates forward whilst drummer Tim Horner adds a hard-swinging touch to the music.

Sherman's compositions are deceptively simple. The opening pieces, "Tip Top Blues" and "The Winning Life," are based on a basic blues form and then a simple theme respectively, but both add the aggressive post-bop rhythm and fast chord changes which act to ignite some remarkable solos from all players, all the while keeping their signature tight interplay. The subsequent pieces, the slower "Trust" and Farnham's "Hope," see the quartet exploring the melodic options presented by the lyrical themes. "Hardship," the closing piece of the first disc, leads the quartet to an intense performance of a simple blues theme, which is used as a launching pad for some great solos by Sherman and Farnham.

The second disc stresses the formative influences of the quartet. It begins with "Explorations," which is dedicated to the harmonic innovations of John Coltrane and again features tight interplay throughout the complicated chord changes. The cover of "You Don't Know What Love Is" places the standard in a hard-swinging Latin context, while "There Is No Greater Love" is interpreted in a more faithful manner. The quartet concludes the set with the encore "Moon River," another standard arranged by Sherman with emphasis on the rhythmic possibilities of the beautiful original melody.

There are not many surprises here, just a great band that enjoys to play. Sherman can be believed when he says that he is happiest when he is performing live; this innocent happiness shines throughout this live release.